Trump threatens military force against protesters across the U.S.

U.S. President Donald Trump has threatened the nation's governors that he would deploy the military to states if they did not stamp out violent protests. His announcement came as police forced back peaceful demonstrators with tear gas so he could walk to a nearby church and pose with a Bible.

Bishop blasts Trump's use of church, Bible as 'antithetical to the teachings of Jesus'

9 months ago
3:27
U.S. President Donald Trump on Monday threatened to deploy the military unless states halt violent protests. Trump said he would mobilize the military to end "lawlessness" and blamed anarchists and Antifa for fomenting unrest during demonstrations against police violence. 3:27

Wielding extraordinary federal authority, U.S. President Donald Trump threatened the nation's governors on Monday that he would deploy the military to states if they did not stamp out violent protests over police brutality that have roiled the nation over the past week. His announcement came as police under federal command forced back peaceful demonstrators with tear gas so he could walk to a nearby church and pose with a Bible.

Trump's bellicose rhetoric came as the nation braced for another round of violence at a time when the country is already buckling because of the coronavirus outbreak and the Depression-level unemployment it has caused. The president demanded an end to the heated protests in remarks from the White House Rose Garden and vowed to use more force to achieve that aim.

If governors throughout the country do not deploy the National Guard in sufficient numbers to "dominate the streets," Trump said the U.S. military would step in to "quickly solve the problem for them."

"We have the greatest country in the world," the president declared. "We're going to keep it safe."

A military deployment by Trump to U.S. states would mark a stunning federal intervention not seen in modern American history. Yet the message Trump appeared to be sending with the brazen pushback of protesters outside the White House was that he sees few limits to what he is willing to do.

Some around the president likened the moment to 1968, when Richard Nixon ran as the law-and-order candidate in the aftermath of a summer of riots, capturing the White House. But despite his efforts to portray himself as a political outsider, Trump is an incumbent who risks being held responsible for the violence.

Minutes before Trump began speaking, police and National Guard soldiers began aggressively forcing back hundreds of peaceful protesters who had gathered in Lafayette Park, across the street from the White House, where they were chanting against police brutality and the Minneapolis death of George Floyd. As Trump spoke, tear gas canisters could be heard exploding.

Floyd died last week after he was pinned to the pavement by a police officer who put his knee on the handcuffed black man's neck until he stopped breathing. His death set off protests that spread from Minneapolis across America. His brother Terrence pleaded with protesters on Monday to remain peaceful.

Five months before Election Day, the president made clear that he would stake his re-election efforts on convincing voters that his strong-arm approach was warranted to quell the most intense civil unrest since the 1960s. He made little effort to address the grievances of black Americans and others outraged by Floyd's death and the scourge of police brutality, undermining what his campaign had hoped would be increased appeal to black voters.

The scene in and around the White House on Monday night appeared to be carefully orchestrated. As the crowd of protesters grew, Attorney General William Barr arrived in Lafayette Park to look over at the demonstrations and the swarm of law enforcement.

The sudden shift in tactics against the protesters was initially a mystery. Then, after finishing his Rose Garden remarks, Trump emerged from the White House gates and walked through the park to St. John's Church, where an office had been set on fire the previous night.

Trump, who rarely attends church, held up a Bible and gathered a group of advisers — all white — to pose for photos.

The moment was quickly decried by Trump's critics, with New York Gov. Andrew Cuomo saying the president "used the military to push out a peaceful protest so he could have a photo op at a church."

"It's all just a reality TV show for this president," he said on Twitter. "Shameful."

"The president just used a Bible and one of the churches of my diocese as a backdrop for a message antithetical to the teachings of Jesus and everything that our church stands for," she said.

Federal law permits presidents to dispatch the military into states to suppress an insurrection or if a state is defying federal law, legal experts said. But Trump's statements also set up an immediate conflict with officials in New York and other states who asserted that the president does not have the unilateral right to send in troops against the will of local governments.

Most demonstrations peaceful, others violent

The country has been beset by angry demonstrations for the past week in some of the most widespread racial unrest in the U.S. since the 1960s. Spurred largely by Floyd's death, protesters have taken to the streets to decry the killings of black people by police. Minneapolis officer Derek Chauvin has been charged with murder, but protesters are demanding that three of his colleagues be prosecuted, too. All four were fired.

While most of the demonstrations have been peaceful, others have descended into violence, leaving neighbourhoods in shambles, stores ransacked, windows broken and cars burned, despite curfews around the country and the deployment of thousands of National Guard members in at least 15 states.

On Monday, demonstrations erupted from Philadelphia, where hundreds of protesters spilled onto a highway in the heart of the city, to Atlanta, where police fired tear gas at demonstrators, to Nashville, where more than 60 National Guard soldiers put down their riot shields at the request of peaceful protesters who had gathered in front of Tennessee's state capitol to honour Floyd. Two people were killed during protests in the Chicago suburb of Cicero, authorities said, but provided no details. In Louisville, Ky., riot police firing tear gas scattered several hundred protesters from downtown, violently capping a day of mostly peaceful protests.

A vehicle plowed through a group of law enforcement officers at a demonstration in Buffalo, N.Y., injuring at least two. Video from the scene showed the vehicle accelerating through an intersection shortly after officers apparently tackled a protester and handcuffed him. The officers were hospitalized in stable condition, authorities said.

In New York City, where nightfall has brought widespread scenes of destruction, large crowds rallied peacefully in Times Square and Brooklyn during the day. Then, in early evening, looters rushed into a Nike store in Manhattan and protesters smashed storefront windows near Rockefeller Center. Video posted on social media showed some protesters arguing with people breaking windows, urging them to stop.

The city has already endured immense commercial damage from the unrest. On Monday, rioters got through the doors of the city's flagship Macy's store, famous for its Thanksgiving Day parade, and police later pulled at least two handcuffed men out of the store and put them into a van. By that time, most of the street was littered with broken glass.

In Washington, protesters continued marching peacefully through Washington hours after being forced from Lafayette Park and past the 7 p.m. curfew.

Eventually, within sight of the Capitol building, the marchers were turned back by law enforcement officers using tear gas, pellets and low-flying helicopters kicking up debris. As they dispersed, some protesters smashed windows at a nearby office building.

'Most of you are weak'

Earlier Monday, Trump told the nation's governors in a video conference that they "look like fools" for not deploying even more National Guard troops. "Most of you are weak," he said.

WATCH | Trump lambastes governors on conference call about the protests: 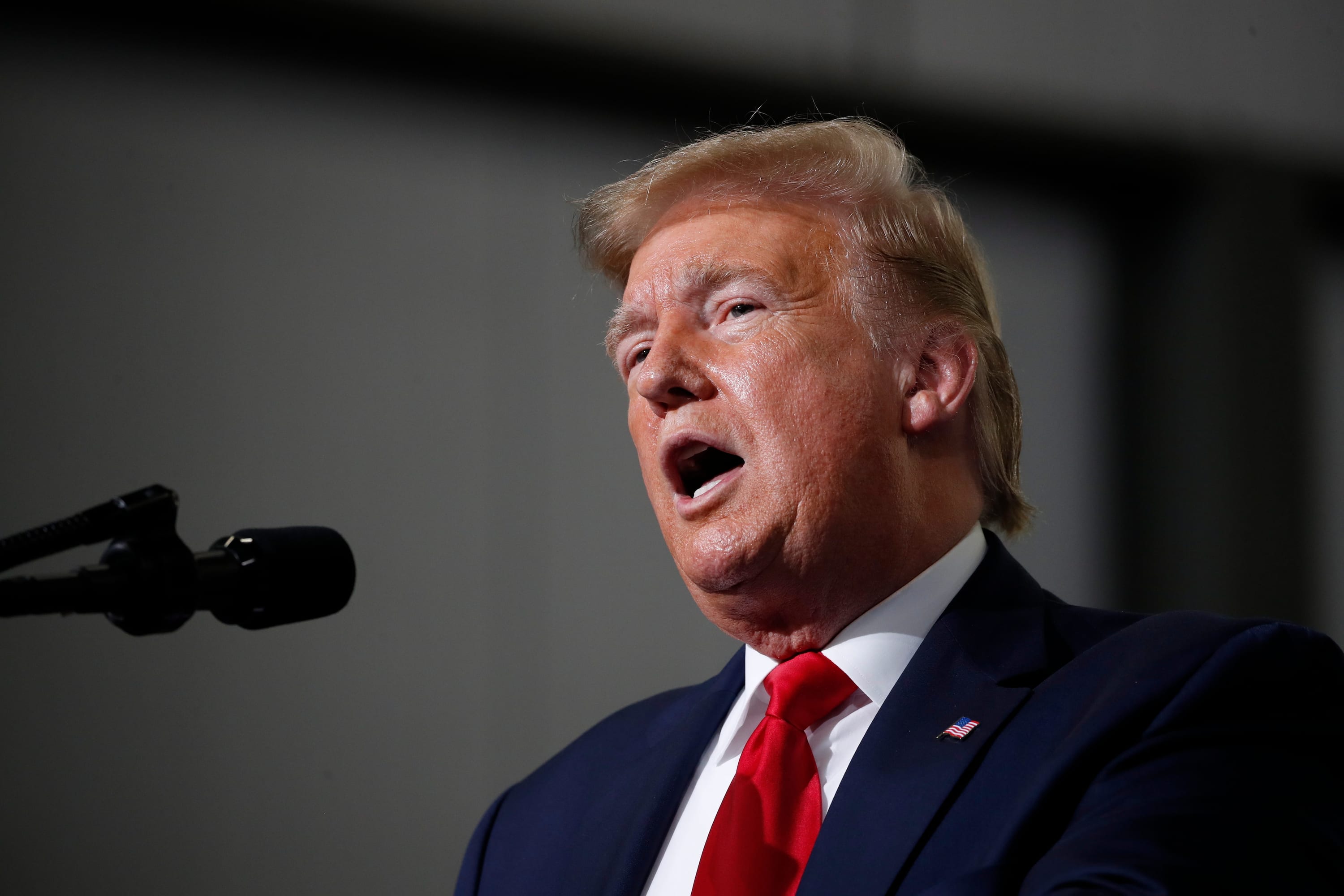 Trump: 'I wish we had an occupying force'

9 months ago
0:34
U.S. President Donald Trump tells governors in a conference call to use the National Guard to control the protests sparked by the death of George Floyd during an arrest. 0:34

Washington Gov. Jay Inslee, a Democrat, dismissed Trump's comments as the "rantings of an insecure man trying to look strong after building his entire political career on racism."

Former vice-president Joe Biden, the presumptive Democratic presidential candidate, vowed to address institutional racism in his first 100 days in office. He met in person with black leaders in Delaware and also held a virtual meeting with big-city mayors.

Biden said hate emerges "when you have somebody in power who breathes oxygen into the hate."

In Oregon, Gov. Kate Brown said she won't send in National Guard troops to help quell violent protests in Portland because they aren't needed. Brown said she would send in 100 state police from across Oregon to assist the city, and activate 50 Guard soldiers to work behind the scenes.

"You don't defuse violence by putting soldiers on the streets," the Democrat said.

In Minneapolis, meanwhile, Floyd's brother Terrence made an emotional plea for peace at the site where Floyd was arrested and died.

WATCH | Brother of George Floyd visits the site of his death: 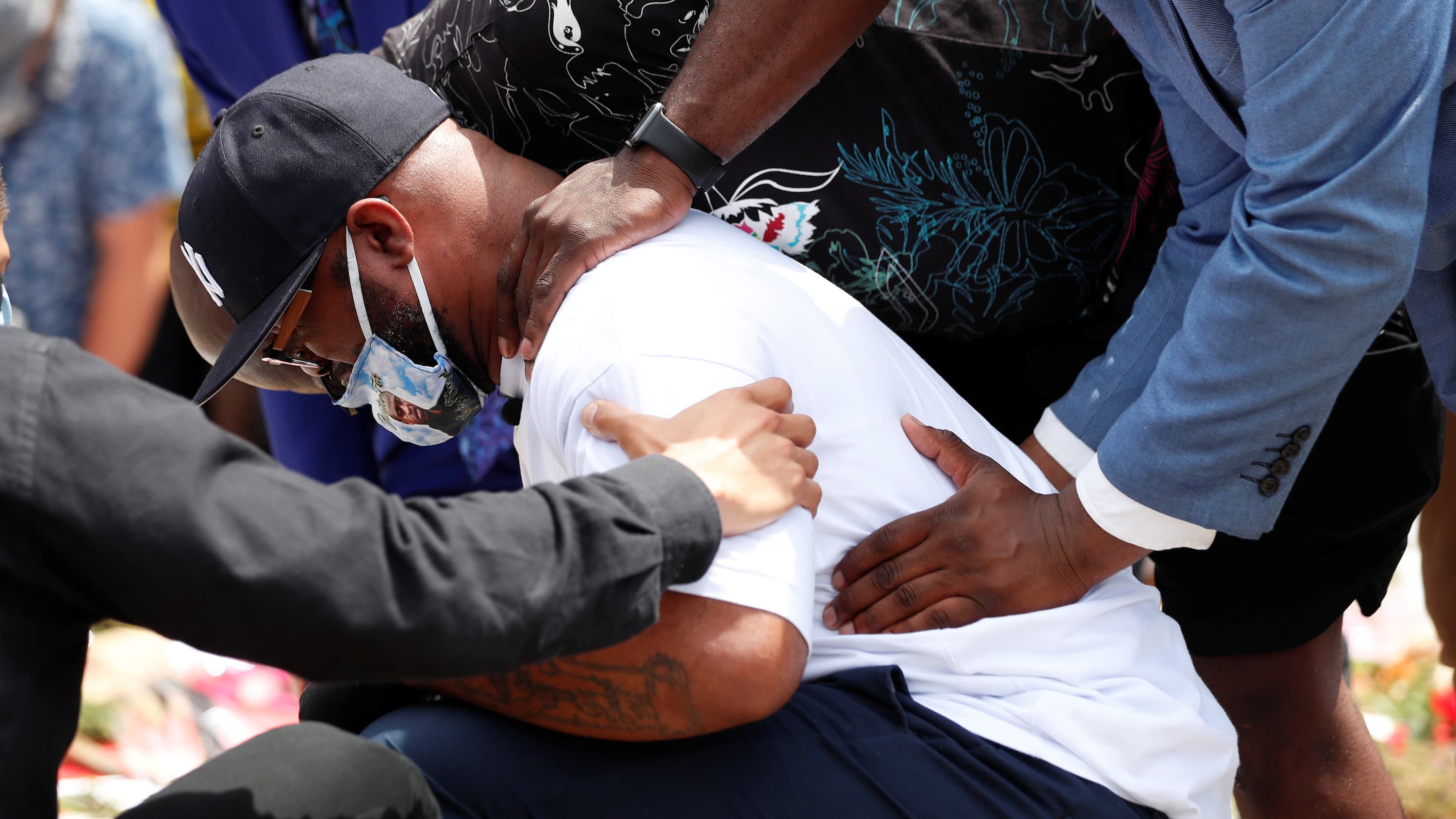 9 months ago
2:56
Friends, supporters gather to mark the site where George Floyd was killed in police custody. 2:56

Also Monday, an autopsy commissioned for Floyd's family found that he died of asphyxiation from neck and back compression, the family's attorneys said.

Authorities in many cities have blamed the violence on outside agitators, though have provided little evidence to back that up. 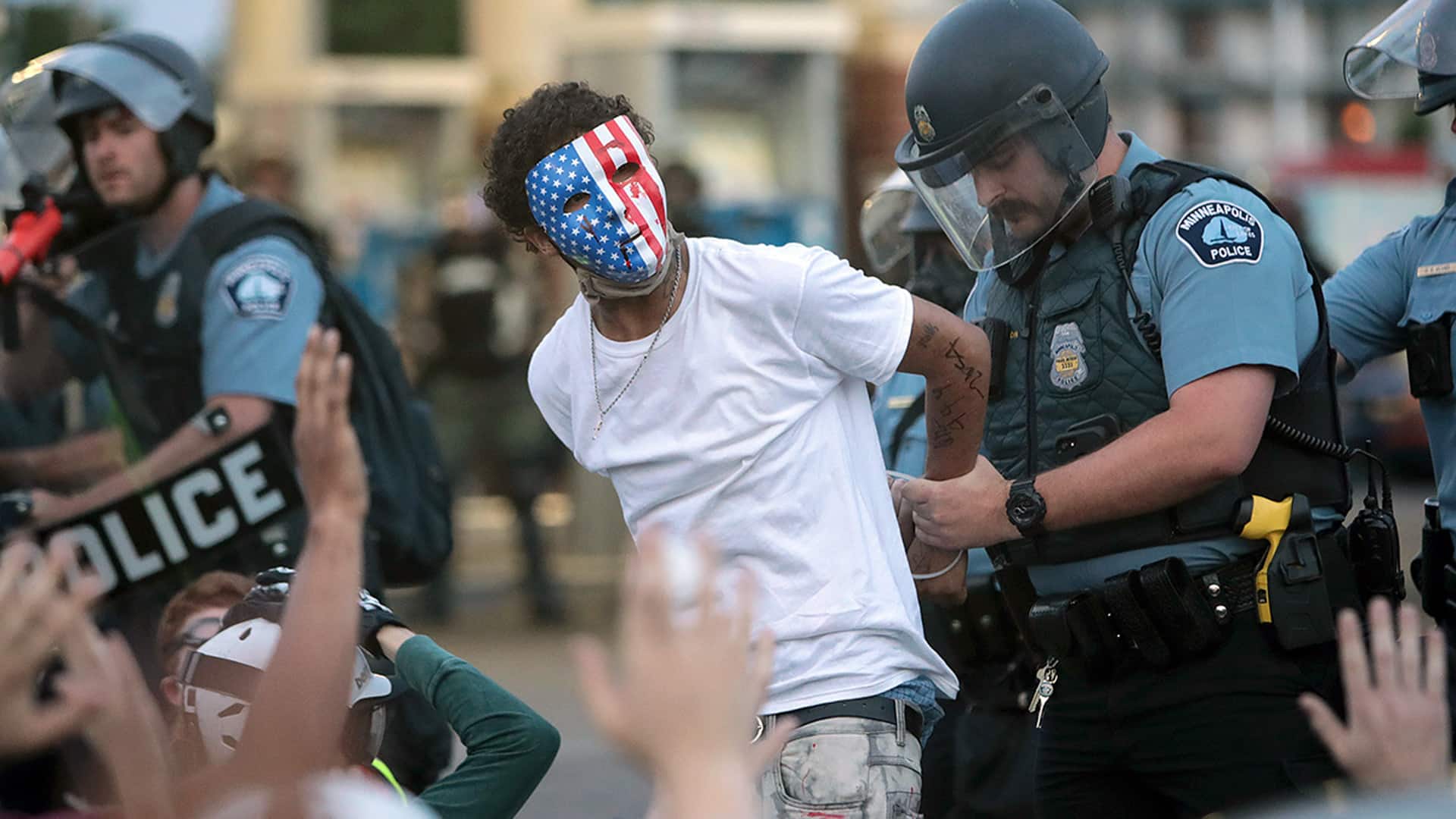 Are outside agitators aggravating Minneapolis protests?

9 months ago
2:03
Some officials claim the majority of people arrested during the protests over George Floyd’s death are outside agitators, but other data shows it’s actually local residents. 2:03

But on Monday, federal authorities arrested a 28-year-old Illinois man saying he had posted self-recorded video on his Facebook page last week that showed him in Minneapolis handing out explosive devices and encouraging people to throw them at law enforcement officers. The video also showed him attempting to light a business on fire and looting, according to an FBI affidavit.

More than 5,600 people nationwide have been arrested over the past week for such offences as stealing, blocking highways and breaking curfew, according to a count by The Associated Press.