U.S. president-elect Donald Trump said on Saturday that his administration would "do all it can" once it takes office on Jan. 20 to help boost freedom and prosperity for Cuban people after the death of Fidel Castro. 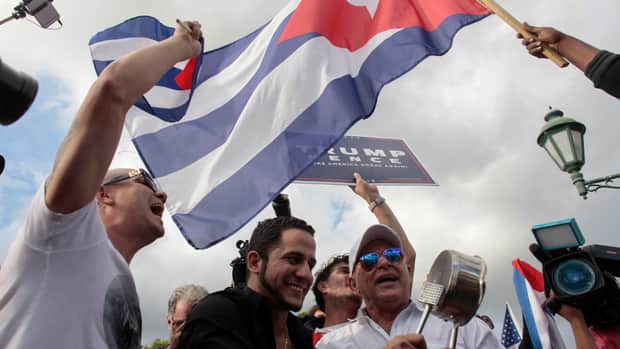 4 years agoVideo
3:50
CBC News speaks with Laura Juncadella, one of many Cuban-Americans to take to the streets Saturday in Miami's Little Havana 3:50

U.S. president-elect Donald Trump said on Saturday that his administration would "do all it can" once it takes office on Jan. 20 to help boost freedom and prosperity for Cuban people after the death of Fidel Castro.

Trump had threatened late in his upstart campaign for the White House that concerns about religious freedom in Cuba could prompt him to reverse President Barack Obama's moves to open relations with the Cold War adversary after more than half a century of estrangement.

Obama said this was an emotional moment for Cubans and Cuban-Americans and offered condolences to Castro's family.

"At this time of Fidel Castro's passing, we extend a hand of friendship to the Cuban people," he said in a statement, noting his administration had "worked hard to put the past behind us."

As for Castro's legacy, he said "history will record and judge the enormous impact of this singular figure on the people and world around him."

Republicans closely await what Trump — a billionaire businessman known for his unconventional approach to politics and policy — will do on Cuba once he takes office.

"Today, the world marks the passing of a brutal dictator who oppressed his own people for nearly six decades. Fidel Castro's legacy is one of firing squads, theft, unimaginable suffering, poverty and the denial of fundamental human rights," Trump said in a statement issued from his West Palm Beach, Fla., resort where he and his family are spending the Thanksgiving holiday weekend.

"Though the tragedies, deaths and pain caused by Fidel Castro cannot be erased, our administration will do all it can to ensure the Cuban people can finally begin their journey toward prosperity and liberty.

"While Cuba remains a totalitarian island, it is my hope that today marks a move away from the horrors endured for too long, and toward a future in which the wonderful Cuban people finally live in the freedom they so richly deserve," he added.

At a Miami rally in September, Trump said he would roll back Obama's Cuban policy reforms unless Cuban leaders allowed religious freedom and freed political prisoners.

"The next president can reverse them, and that I will do unless the Castro regime meets our demands," Trump told supporters.

A bloc of mostly Republican Cuban-American lawmakers has worked to keep tight restrictions on trade and travel with Cuba for years. Some Republican lawmakers broke with party orthodoxy to back Obama's reforms, drawn by the economic benefits of restoring ties.

But many have chafed against the changes, saying Cuba's government was still too repressive to ease restrictions. Florida Senator Marco Rubio, who ran against Trump to be the Republican presidential candidate, said Castro turned Cuba into "an impoverished island prison" where dissidents were routinely jailed and killed. 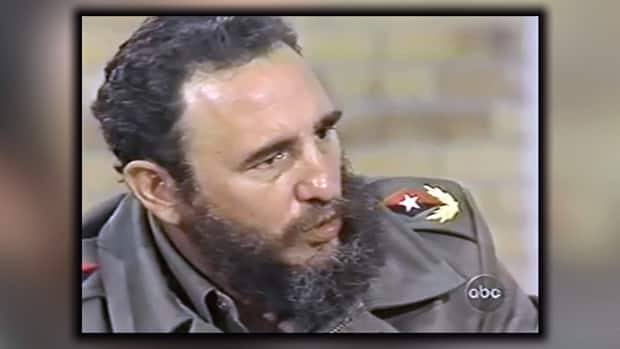 4 years agoVideo
0:56
It wasn't until 1977 that Castro first spoke to U.S. media, sitting down with American journalist Barbara Walters. Here's a short clip of that exchange. 0:56

"The dictator has died, but the dictatorship has not," Rubio said in a statement. "The future of Cuba ultimately remains in the hands of the Cuban people, and now more than ever Congress and the new administration must stand with them against their brutal rulers and support their struggle for freedom and basic human rights."

Ileana Ros-Lehtinen, a senior Republican House lawmaker from Florida who fled Cuba as a child, said on CNN that Castro's death changes nothing.

"We lost our native homeland to communism," Ros-Lehtinen said. "They just rule over Cuba with an iron fist."

Senator majority leader Mitch McConnell said he hoped Raul Castro would "turn the page" on oppression. "Freedom and democracy are long overdue in Cuba," he said in a statement.

On the streets of Miami on Saturday, the anger and frustration of many Cubans over decades of political repression in their native land was palpable.

Castro's death prompted celebrations among the country's exiles. People took to the street to sing and dance and bang on pots.

One man held an effigy of Castro's severed head on a stick, while others carried signs calling on Satan to "take care" of Castro in hell.

Many people were also wearing "Make America Great Again" hats and sporting "Trump Pence" T-shirts. The attire suggested that at least some of Miami's Cuban-Americans are counting on president-elect Trump to play a crucial role in shaping U.S. policy with Cuba in the post-Fidel era.

Dasiel Bellido de Luna, a 27-year-old medical technician who arrived from Cuba three years ago, said he did not support all of Trump's campaign rhetoric, but he thought the president-elect would deliver on his promise of renegotiating with Cuba.

"Trump has said he wants to make a better deal than the unilateral agreement made by [President Barack] Obama," Bellido de Luna said, referring to executive orders signed by the U.S. president. "This is the time to force them to open the Cuban economy to its citizens." 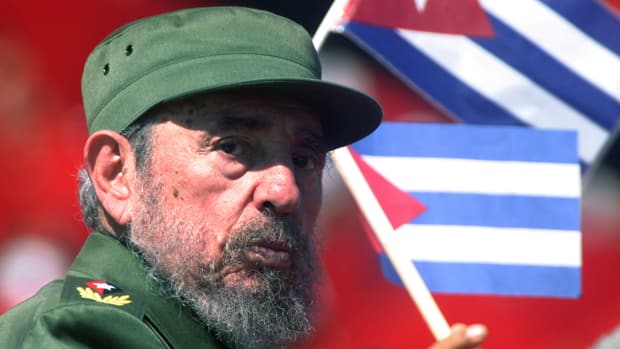 4 years agoVideo
4:41
CBC's Paul Hunter takes a look at the life and legacy of the former Cuban leader 4:41

But Cuba Now's Herrero said the Trump administration should be careful to avoid former president Ronald Reagan's mistake of isolating Cuba at the end of the Cold War.

"That will only embolden its hard-liners and further delay change," Herrero said. "Now more than ever is time for the United States to fully open itself to the Cuban people."

Like Herrero, Miami Beach Commissioner Ricky Arriola is hopeful that Trump will think twice about reversing the recent opening between the two countries.

"I think in his heart, he is someone who sees opportunity in Cuba," said Arriola, a Cuban-American politician who would like to see Cuba set up a consulate in his city.

Since the Obama administration began normalizing relations, the number of new Cubans arriving in the United States, particularly the Miami area, has surged.

As the proportion of younger Cubans — who did not live through Castro's revolution — overtakes that of older exiles, attitudes about dealing with the Cuban government have softened.

In September, a Florida International University poll found that 56 per cent of local Cuban-Americans "strongly" or "mostly" favour re-engagement with the island. 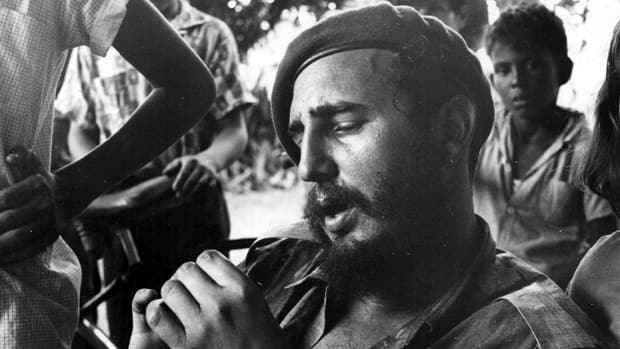 Fidel Castro: Inside his childhood home

For some, there is a lingering respect for Castro as an icon of a bygone era, despite his human rights record.