On the eve of U.S. President Donald Trump's impeachment trial, the Senate leader proposed a compressed calendar for opening statements, White House lawyers argued for swift rejection of the "flimsy" charges and the Capitol braced for the contentious proceedings unfolding in an election year.

On the eve of U.S. President Donald Trump's impeachment trial, the Senate leader proposed a compressed calendar for opening statements, White House lawyers argued for swift rejection of the "flimsy" charges and the Capitol braced for the contentious proceedings unfolding in an election year.

Final trial preparations were underway Monday on a tense day of plodding developments with Trump's legacy — and the judgment of both parties in Congress — at stake.

The president's legal team, in its first full filing for the impeachment court, argued that Trump did "absolutely nothing wrong" and urged the Senate to swiftly reject the "flawed" case against him.

"All of this is a dangerous perversion of the Constitution that the Senate should swiftly and roundly condemn," the lawyers wrote. "The articles should be rejected and the president should immediately be acquitted."

The brief from the White House, and the House Democratic response, come as the Senate could be facing 12-hour sessions for the rare trial taking place in an election year, with some of the very senators running to replace Trump as president sitting as jurors.

Senate Majority Leader Mitch McConnell on Monday proposed a condensed, two-day calendar for each side to give opening statements — ground rules that Democrats immediately rejected.

Voting on the Republican leader's resolution will be one of the first orders of business when senators convene Tuesday. It also pushes off any votes on witnesses until later in the process, rather than up front, as Democrats had demanded.

Senators are poised for only the third presidential impeachment trial in U.S. history, coming just weeks before the first primaries of the 2020 election season and as voters are assessing Trump's first term and weighing the candidates who want to challenge him in the fall.

House Democrats impeached the president last month on two charges: abuse of power by withholding U.S. military aid to Ukraine as he pressed the country to investigate Democratic rival Joe Biden, and obstruction of Congress by by refusing to comply with their investigation.

The Constitution gives the House the sole power to impeach a president and the Senate the final verdict by convening as the impeachment court for a trial.

WATCH | What to expect in Trump's Senate impeachment trial: 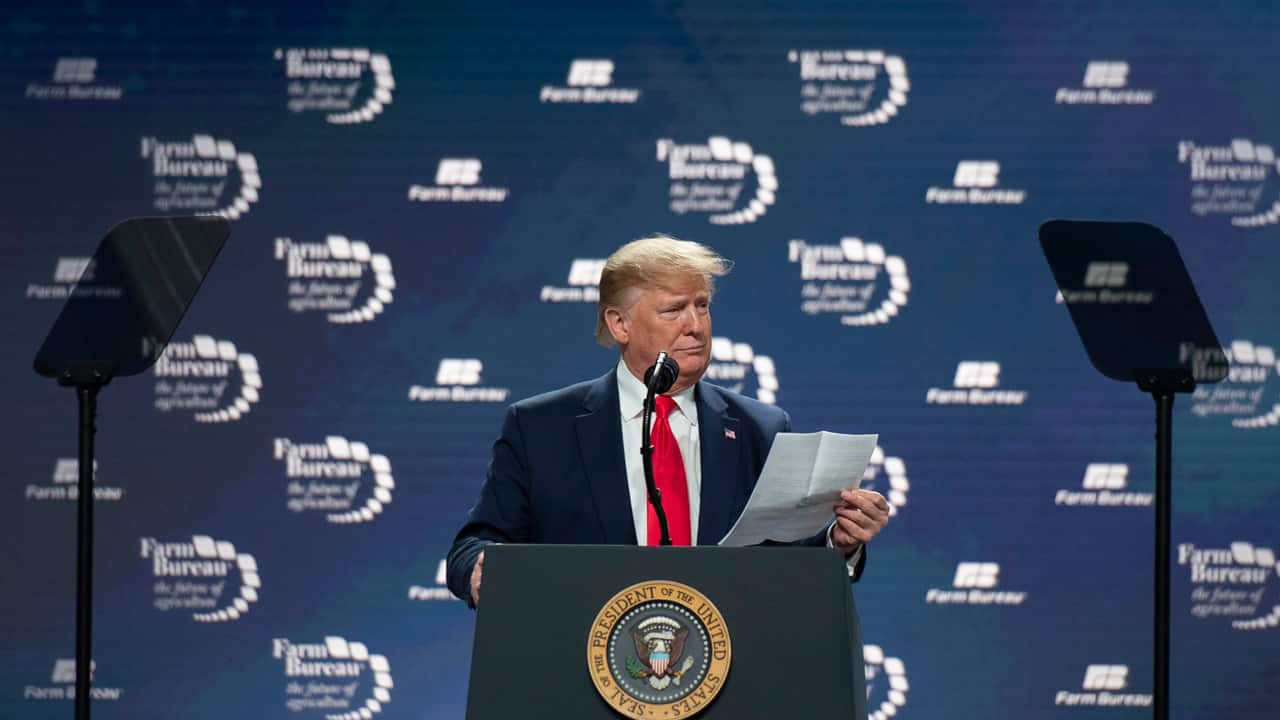 1 year ago
2:06
U.S. President Donald Trump's impeachment trial gets underway on Tuesday. Here's what to watch for when the U.S. Senate convenes. 2:06

McConnell is angling for a speedy trial toward acquittal, and with Republicans holding the Senate majority, the proposal is likely to be approved by senators in the president's party.

"It's clear Sen. McConnell is hell-bent on making it much more difficult to get witnesses and documents and intent on rushing the trial through," Schumer said. He vowed to propose votes Tuesday to try to amend the rules package. He called it a "cover-up."

The first several days of the trial are now almost certain to be tangled in procedural motions playing out on the Senate floor or, more likely, behind closed doors, since senators must refrain from speaking during the trial proceedings.

At the White House, where the president was embarking for an overseas trip to the global leaders conference in Davos, Switzerland, officials welcomed the Republican trial proposal.

"We are gratified that the draft resolution protects the president's rights to a fair trial, and look forward to presenting a vigorous defence on the facts and the process as quickly as possible, and seeking an acquittal as swiftly as possible," said White House Legislative Affairs Director Eric Ueland.

After the four days of opening statements — two days per side — senators will be allowed up to 16 hours for questions to the prosecution and defence, followed by four hours of debate. Only then will there be votes on calling other witnesses.

At the end of deliberations, the Senate would then vote on each impeachment article.

McConnell had promised to set rules similar to the last trial, of then-president Bill Clinton in 1999, but his resolution diverged in key ways, which may leave some senators from both parties uneasy.

Republican Sen. Mitt Romney of Utah said in an email message to his constituents Monday night that the resolution put forth by McConnell "overall, aligns closely with the rules package approved 100-0 during the Clinton trial." He is among a small number of Republican senators who want to consider witness testimony and documents that weren't part of the House impeachment investigation.

With security tightening at the Capitol, the House prosecutors led by intelligence committee chairman Adam Schiff made their way through crowds of tourists in the Rotunda to tour the Senate chamber. The White House legal team led by Pat Cipollone and Jay Sekulow soon followed. Both sides were under instructions to keep the chamber doors closed to onlookers and the press.

Four TV monitors were set up inside the Senate chamber, which will be used to show testimony, exhibits and potentially tweets or other social media, according to a person familiar with the matter but unauthorized to discuss it who spoke on condition of anonymity.

In their own filing Monday, House prosecutors replied to Trump's not guilty plea by making fresh demands for a fair trial in the Senate.

"President Trump asserts that his impeachment is a partisan 'hoax.' He is wrong," the prosecutors wrote.

The House Democrats said the president can't have it both ways — rejecting the facts of the House case but also stonewalling congressional subpoenas for witnesses and testimony. "Senators must honor their own oaths by holding a fair trial with all relevant evidence," they wrote.

The White House document released Monday says the two charges against the president don't amount to impeachment offences. It asserts that the impeachment inquiry, centred on Trump's request that Ukraine's president open an investigation into Democratic rival Biden, was never about finding the truth.

House Democrats in their initial court filing over the weekend called Trump's conduct the "worst nightmare" of the framers of the constitution.

"President Donald J. Trump used his official powers to pressure a foreign government to interfere in a United States election for his personal political gain," the House prosecutors wrote, "and then attempted to cover up his scheme by obstructing Congress's investigation into his misconduct."

But Trump's team contended Monday that even if Trump were to have abused his power in withholding the Ukraine military assistance, it would not be impeachable, because it did not violate a specific criminal statute.

No president has ever been removed by the Senate. The current Senate, with a 53-47 Republican majority, is not expected to mount the two-thirds vote needed for conviction. Even if it did, the White House team argues it would be an "unconstitutional conviction" because the articles of impeachment were too broad.

Administration officials have argued that similar imprecision applied to the perjury case in Clinton's impeachment trial.

The White House also suggests the House inquiry was lacking because it failed to investigate Biden or his son, Hunter, who served on the board of a gas company in Ukraine while his father was vice-president. There is no evidence of wrongdoing by either Biden.