U.S. President Donald Trump paid respects to the late U.S. Supreme Court Justice Ruth Bader Ginsburg Thursday morning, just two days before he is set to announce his nominee to replace her on the high court.

Some in the crowd below the Supreme Court steps chanted, 'Vote him out!' 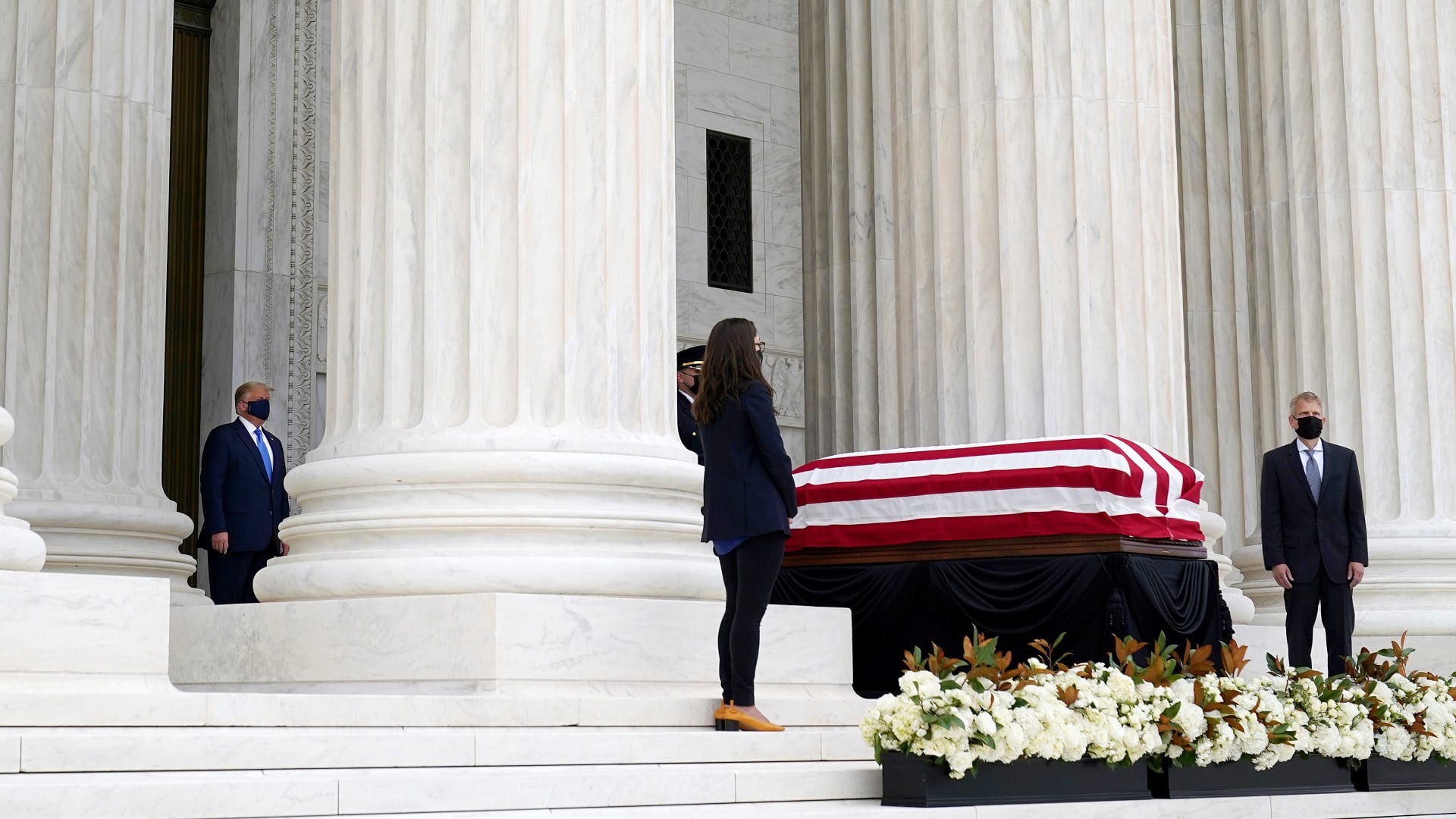 28 days ago
0:33
U.S. President Donald Trump was hit with cries of 'Vote him out' as he visited the U.S. Supreme Court, where the late Justice Ruth Bader Ginsburg lies in repose. 0:33

The president and his wife, Melania — both wearing masks — stood silently at the top of the steps of the court and looked down at Ginsburg's flag-draped coffin, surrounded by white flowers.

The death of the liberal-leaning justice has sparked a controversy over the balance of the court just weeks before the November presidential election.

Moments after he arrived, booing could be heard from spectators who then briefly chanted, "Vote him out."

"I think that was just a political chant, we could hardly hear it from where we were," Trump told reporters Thursday afternoon before heading to a campaign rally.

Another chant of "honour her request," could be heard, a reference to a statement by Ginsburg's granddaughter upon her death.

"My most fervent wish is that I will not be replaced until a new president is installed," Ginsburg dictated in a note in her final days, according to granddaughter Clara Spera.

It was an apparent request to treat the vacancy as Republicans did in 2016 when they refused to take up Barack Obama's nominee to replace the late Antonin Scalia, citing the upcoming election.

Trump, without evidence, claimed in a Fox News interview on Monday that the request was contrived by Democrats.

"I don't know that she said that, or if that was written out by Adam Schiff, and [Chuck] Schumer and [Nancy] Pelosi," Trump said. "That came out of the wind. It sounds so beautiful, but that sounds like a Schumer deal, or maybe Pelosi or Shifty Schiff."

Nominee to be announced Saturday

As Trump's motorcade returned to the White House, some spectators standing on the sidewalk chanted "Breonna Taylor." Their calls came one day after it was announced that a Kentucky grand jury had brought no charges against Louisville police for the death of Taylor, a Black woman, during a drug raid connected to a suspect who did not live at her home.

Attorney Laura French travelled to Washington from Athens, Ga., to pay her respects. She said she owes her success to trailblazers like Ginsburg. She said it was right for Trump to come pay respects, though she doesn't agree with him politically.

"He should. He's the president, and she gave her life and service to this country and to these beliefs that are in our Constitution," French said.

But while the setting was unusual, it's not the first time a president or top candidate has been booed in the midst of a heated presidential campaign. The list of those who have endured such refrains include Richard Nixon, Jimmy Carter and George H.W. Bush at various events.

In between elections, Bill Clinton — who had avoided serving in the Vietnam War — was booed by some veterans at a Memorial Day event at the Vietnam Memorial in 1993, while Barack Obama was famously heckled by Republican congressman Joe Wilson during the State of the Union in 2009.

On Friday, Ginsburg will lie in state at the Capitol, only the second U.S. Supreme Court justice to do so after William Howard Taft. Taft had also been president.

Ginsburg will be buried beside her husband, Martin, who died in 2010, in a private ceremony at Arlington National Cemetery next week. She is survived by a son and a daughter, four grandchildren, two step-grandchildren and a great-grandchild.

Meanwhile, the president is expected to announce his nominee to replace Ginsburg on Saturday. He has said he will select from a list of five women. Republicans are working to move quickly on a confirmation vote, possibly even before the Nov. 3 election.