After 163 weeks in office, Trump gets his defining crisis

While other presidencies have been rocked early by society-rattling crises, Trump's has arrived late. And things are getting messy. A falsehood-filled speech rattled markets and rankled allies at home and abroad.

For George W. Bush, a society-rattling crisis came 33 weeks into his presidency with the Sept. 11 attacks. For Barack Obama, a global economic panic was melting down the financial system even before his first week in office.

Donald Trump's defining crisis arrived in the 163rd week of his presidency. When it hit, it hit hard.

In a falsehood-filled prime-time television address earlier this week, Trump confused Americans, annoyed allies, and failed to calm financial markets. While he was still talking, they started flopping.

Stocks kept sinking overnight and into the next day in their worst one-day collapse since 1987.

Back then, Tom Hanks was a budding young film actor. Now he has coronavirus. So does an aide to the president of Brazil who met Trump a few days ago.

That news emerged amid mounting panic as the spreading global outbreak began shutting down workplaces and forms of entertainment from Broadway to the Big Leagues to the Magic Kingdom.

But Trump's initial reaction to the pandemic left even his usual friends cold. Not even Trump's Amen corner was singing his praises. The morning after his initial address, his former campaign manager called it Black Thursday.

"There was a lot of confusion," Bannon said in his podcast, reacting to the speech.

"We've had basically, essentially, a meltdown from global financial markets immediately at the end of the speech."

Future generations will judge what the president does next, he said: "This is going to be the most significant thing not just of his administration [but] of modern American … history."

Trump indeed ratcheted up his response later in the week.

The markets bounced back Friday after Trump declared a national emergency and promised a slew of other health and economic measures — from drive-thru testing facilities to financial assistance for people to help for the beleaguered oil sector.

But even at that news conference Trump rejected the idea that he botched the early response to the crisis, though he'd downplayed it for weeks before it suddenly became a national emergency.

"No, I don't take responsibility at all," Trump said Friday when asked about snags in delivering screening tests.

Trump was getting blasted at home and abroad.

Being a great leader has many attributes. Confusing people is not among them. <a href="https://twitter.com/realDonaldTrump?ref_src=twsrc%5Etfw">@realDonaldTrump</a> provided false information about testing...multiple times! Invoking hyperbole in certain situations may be permissible but false statements about the <a href="https://twitter.com/hashtag/Coronavirus?src=hash&amp;ref_src=twsrc%5Etfw">#Coronavirus</a> is sloppy &amp; dangerous.

The Europeans said they never got a heads-up that Trump planned to close the border. Deputy Prime Minister Chrystia Freeland said Thursday that Canada also got no warning.

In his own defence, Trump said he had to move quickly, as Europe was still allowing travel from China. (Note to Canadians: that's also true of Canada.) 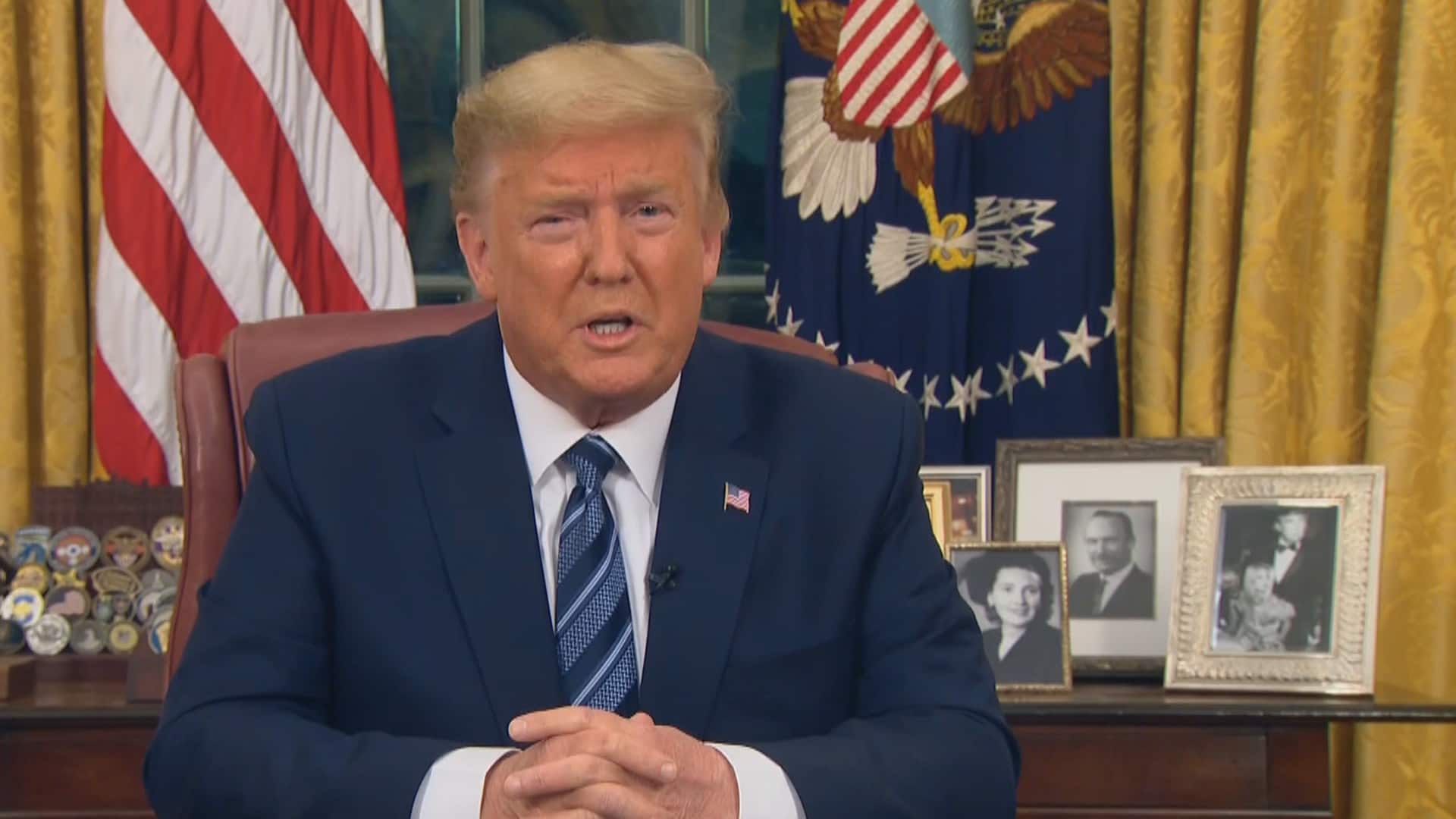 12 months ago
4:34
The European Union has lashed out at U.S. President Donald Trump's decision to restrict travel from Europe to the U.S. over the coronavirus, saying that the outbreak is a 'global crisis' that does not respect borders. 4:34

Trump then skipped to another gripe he's got with the Europeans: They don't play fair on trade. "I mean, when they raise taxes on us they don't consult us."

What triggered additional consternation from critics and allies alike was the barrage of blatant falsehoods in an address that was supposed to offer clarity about America's game plan.

Trump got fundamental details wrong, sending the White House cleanup crew scrambling to mop up the mess of misconceptions created in the Oval Office.

The falsehoods: a blow-by-blow

In a formal address to the country, in prime time Wednesday, read from a Teleprompter, Trump:

"No, it was pretty casual," said Zaid Shoorbajee, who was arriving Thursday at Washington's Dulles Airport from Saudi Arabia, after his planned trip to Egypt got cancelled.

"I saw a couple of signs — messages on the screen saying, 'If you feel sick, self-quarantine for two weeks.' But nobody asked us personally." 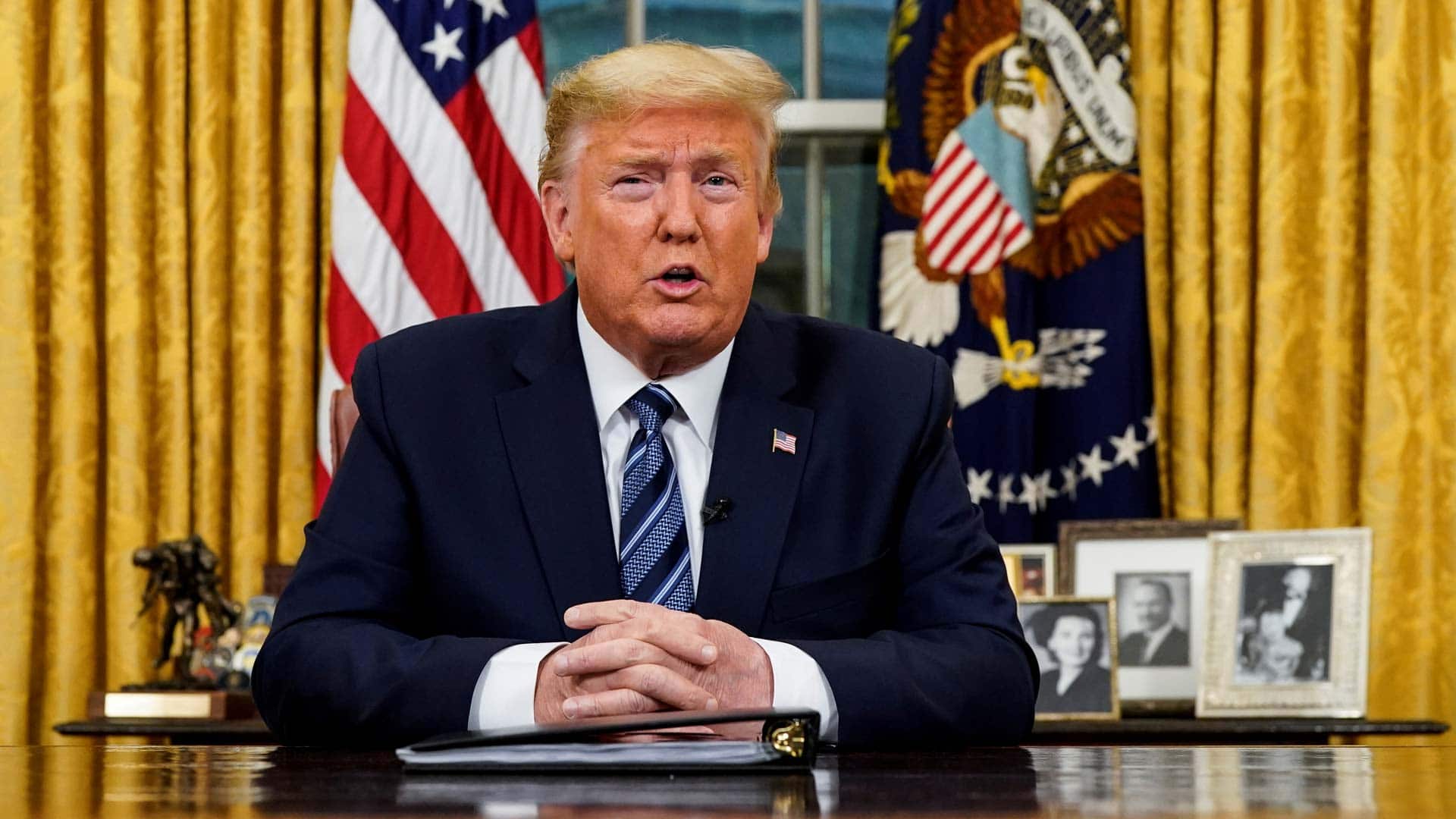 12 months ago
9:32
U.S. President Donald Trump delivers a prime-time address on Wednesday on his administration's response to the coronavirus pandemic. 9:32

That's after the biggest, most enduring falsehood of them all: Trump's repeated insistence in recent weeks that coronavirus was no big deal and would soon be over.

That no-worry attitude had an effect, with friendly media allies spending weeks dismissing the panic as a Democratic-orchestrated hoax to hurt the president.

One example of the genre, a few days ago, was a Breitbart tweet above an article: "LOL. Cancel Trump rallies? Dream on!" According to opinion polls, Republican voters are now far likelier to shrug off the whole crisis.

Then there was the less-discussed matter of how Trump arrived at his choice of countries targeted for travel bans.

When asked why the ban didn't apply to the United Kingdom, Trump replied that it's doing "a very good job," with few cases of coronavirus. But the U.K. has more cases than Belgium, Austria, the Czech Republic, Greece, Iceland, Finland, Portugal, Slovenia, Armenia, Poland, Slovakia and a few other eurozone nations subjected to the ban.

For weeks, critics have also been sounding the alarm that Trump eliminated the government's entire pandemic response chain of command.

Will this succession of blunders sink Trump's presidency?

After all, this is a president whose approval ratings are a bit like a goldfish moving around a bowl — always wiggling, never moving too far.

His daily polling averages entered the crisis having dipped, within that narrow band, to a lower level than in previous weeks.

One survey showed presumptive Democratic nominee Joe Biden with his largest lead over Trump in a while.

Most Americans, however, long ago made up their mind about Trump.

Not even economic shocks move votes like they used to in this polarized environment, where opinions are deeply entrenched, said Robert Griffin, who researches American public opinion at the Democracy Fund's Voter Study Group.

"My own take is it's still going to affect [Trump] — but less than we might think," Griffin said.

So a White House that three months ago survived an impeachment, and two months ago avoided war with Iran, and one month ago went to war with its own Justice Department, still has nearly eight whole months to ride out this crisis.

While the process has been notoriously slow and problem-plagued in the U.S., tests are ramping up at state-run labs.

The U.S. Federal Reserve has promised to buy $1.5 trillion US in assets, and there's talk of a possible bipartisan deal in Congress for an emergency legislative package.

Even Trump's family has promised help.

Presidential daughter and presidential staffer Ivanka Trump said Thursday the administration is working with states to get sick-leave benefits for people with the virus.

Trump's likely general-election adversary, meanwhile, rolled out his own proposals Thursday for dealing with the crisis.

In a speech, Biden listed measures he said should be taken, including the most basic one: keeping citizens informed about a pandemic.

"Let me be crystal clear: The coronavirus does not have a political affiliation. It will infect Republicans, Independents and Democrats alike," Biden said.

With files from CBC's Katie Simpson