World leaders who have tested positive for the coronavirus

U.S. President Donald Trump has tested positive for the coronavirus, joining a small group of world leaders who have been infected. Trump is 74, putting him at higher risk of serious complications. Here's a look at other leaders, including Canadian politicians, who have had the virus.

U.S. President Donald Trump announced Thursday night that he had contracted the virus

U.S. President Donald Trump tested positive for the coronavirus on Oct. 2, joining a small group of world leaders who have been infected. Trump is 74, putting him at higher risk of serious complications. Here's a look at other leaders who have had the virus, as well as some Canadian politicians who have tested positive or needed to isolate themselves and get tested for COVID-19:

The British prime minister was the first major world leader confirmed to have COVID-19. He was moved to intensive care in April after his symptoms dramatically worsened a day after he was hospitalized for what were called routine tests. He was given oxygen but did not need a ventilator, officials said. He later expressed his gratitude to National Health Service staff for saving his life when his treatment could have "gone either way." 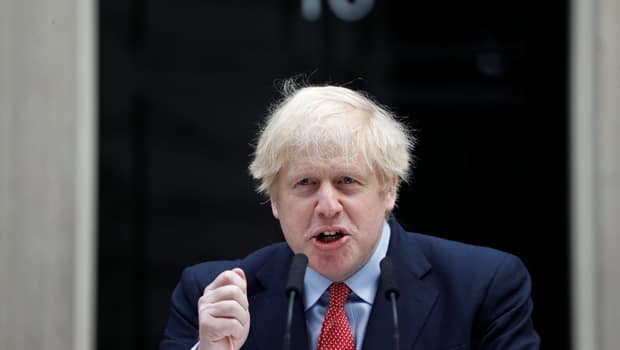 Boris Johnson back at work after beating COVID-19

9 months agoVideo
5:50
British Prime Minister Boris Johnson says he is pleased with the progress made in Britain while he was recovering from COVID-19, but says it's still too dangerous to lift the lockdown. 5:50

The Brazilian president announced his illness in July and used it to publicly extol hydroxychloroquine, the unproven malaria drug that he'd been promoting as a treatment for COVID-19 and was taking himself. For months he had flirted with the virus as he flouted physical distancing at lively demonstrations and encouraged crowds during outings from the presidential residence, often without a mask.

The Polish president tested positive for coronavirus but is feeling good and is in isolation, his spokesperson said on Oct. 24. On the previous day, Andrzej Duda had visited the National Stadium in Warsaw, which is being transformed into a field hospital. He also met with Iga Swiatek, the 19-year-old Polish tennis player who won the French Open earlier this month. She said she would self-isolate.

The Honduras president announced in June that he had tested positive, along with two other people who worked closely with him. Hernandez said he had started what he called the "MAIZ treatment," an experimental and unproven combination of microdacyn, azithromycin, ivermectin and zinc. He was briefly hospitalized and released. He has added his voice to growing pleas for equitable access to any COVID-19 vaccine, asking the recent UN gathering of world leaders, "Are people to be left to die?"

The president of Belarus, who dismissed concerns about the virus as "psychosis" and recommended drinking vodka to stay healthy, said in July he had contracted it himself but was asymptomatic. Belarus is one of the few countries that took no comprehensive measures against the virus. Other top officials in former Soviet states who were infected include Armenian Prime Minister Nikol Pashinyan and Russian Prime Minister Mikhail Mishustin.

The Guatemalan president said he tested positive for the virus in September. "My symptoms are very mild. Up to now, I have body aches, it hurt more yesterday than today, like a bad cold," he said during a televised address. "I don't have a fever, I have a bit of a cough." He said he'd be working from home.

The virus drove the Bolivian interim president into isolation in July, but she said she was feeling well.

The newly elected president of the Dominican Republic contracted and recovered from COVID-19 during his campaign. He spent weeks in isolation before the country's July election.

Iran, the epicentre of the Mideast's initial coronavirus outbreak, has seen several top officials test positive. Among them are Senior Vice-President Eshaq Jahangiri and Vice-President Massoumeh Ebtekar. Cabinet members have tested positive, too.

Vice-President M. Venkaiah Naidu, 71, recently tested positive but his office said he had no symptoms and was quarantined at home. Home Minister Amit Shah, the No. 2 man in Prime Minister Narendra Modi's government, was hospitalized for COVID-19 last month and has recovered. Junior Railways Minister Suresh Angadi last week was the first federal minister to die from COVID-19.

Israel's then-Health Minister Yaakov Litzman tested positive in April and recovered. Litzman is a leader in Israel's ultra-Orthodox community, which has seen a high rate of infection as many have defied restrictions on religious gatherings. The minister for Jerusalem affairs, Rafi Peretz, tested positive over the summer as cases surged in the country and recovered.

The country's Mineral Resources and Energy Minister Gwede Mantashe and Labour Minister Thulas Nxesi were infected as cases surged in June and July.

Canadian politicians from federal party leaders down to the municipal level have also been personally affected by COVID-19. Here are a few who have either tested positive or needed to isolate themselves after possible exposure.

The federal Conservative leader and his wife tested positive for the virus last month, not long after O'Toole won the leadership of the party. It's believed he contracted the virus from a staffer who was in his immediate circle. He emerged from quarantine to deliver his official reply to the Liberals' throne speech. "We all have to be very cautious," he said upon his return.

The Bloc Québécois leader and his wife also tested positive for the virus last month. He returned to Parliament the same day as O'Toole, saying he was lucky to have caught a mild case of the illness. "Some people go through it much more painfully than I did," he said. "I was very, very, very lucky. Some people die of that thing."

The prime minister's wife, Sophie Grégoire Trudeau, tested positive for COVID-19 on March 12 after a trip to the United Kingdom. The prime minister subsequently went into a 14-day isolation at home with his three kids, just as the pandemic lockdown was beginning in Canada. Trudeau remained in isolation for almost a month, not returning to Parliament Hill until April 8. He never developed symptoms and never got tested for COVID-19, but says he will take an antibody test when they are widely available.

The former federal finance minister was one of at least eight MPs who were tested for COVID-19 and self-isolated after meeting with United Nations World Food Program executive director David Beasley in Ottawa on March 11 and March 12. Beasley met privately with Morneau, attended a reception and appeared at a House of Commons committee. Beasley tested positive for COVID-19 about a week later.

The Brampton-West Liberal MP tested positive for COVID-19 on March 25. She was one of the MPs who met with Beasley, although her office said it was not clear where she contracted the virus.

The federal minister of natural resources was tested and self-isolated in early March after developing a bad cold. He had gone to a mining conference in Toronto attended by more than 23,000 people from around the world. At least three people at the conference tested positive for COVID-19, but O'Regan was not among them.

The mayor of Longueuil, Que., on Montreal's south shore, tested positive for COVID-19 last month. Her positive test led to the isolation and testing of at least seven other Quebec politicians, including three provincial cabinet ministers and Montreal Mayor Valérie Plante.