Bob Corker and Jeff Flake, two southern Republican senators with little to lose politically as they enter their last months in office, strongly criticized Donald Trump's temperament as president on Tuesday, a remarkable display as the party sought to unite over tax reform.

Bob Corker and Jeff Flake, two southern Republican senators with little to lose politically as they enter their last months in office, strongly criticized Donald Trump's temperament as president on Tuesday, a remarkable display as the party seeks to unite over tax reform.

Corker strongly criticized Trump in interviews and on Twitter, saying the president is consistently untruthful and has debased the United States and damaged its standing around the world.

"The president has great difficulty with the truth on many issues," Corker said in a CNN interview at the Capitol, hours before Trump met with him and other senators to seek consensus on a tax reform plan.

"It's amazing. Unfortunately, world leaders are very aware that much of what he says is untrue," Corker continued. "Certainly people here are, because these things are provably untrue. They're just factually incorrect and people know the difference."

Although he is a foreign policy specialist, Corker is also a key player in the tax debate. His support could be crucial as Republicans seek passage of the White House-backed tax plan in the closely divided Senate.

But Corker, a senator from Tennessee who recently announced he was not seeking re-election, pulled no punches in his onslaught against Trump, acknowledging that tensions between the two men, once allies, have been building for months.

He assailed Trump for telling falsehoods that are easily disproven and questioned why he persisted in doing so.

"I don't know why he lowers himself to such a low, low standard and debases our country in that way, but he does. He is purposely breaking down relationships we have around the world that had been useful to our nation.… I think the debasement of our nation is what he'll be remembered most for."

When reporters caught up to Corker after the working lunch, which lasted about 90 minutes, he said Trump didn't call him out during the lunch, and they had no interaction.

But minutes later, Arizona Republican Jeff Flake stood up in the Senate chamber to launch a broadside at Trump as he announced he, too, won't seek re-election in the 2018 midterms.

Flake took aim at the "coarseness of our leadership" and a need to get back to civil discourse in Washington. He bemoaned how international alliances can be upended "by the level of thought that goes into 140 characters," a shot at Trump's frequent, unpredictable tweets. 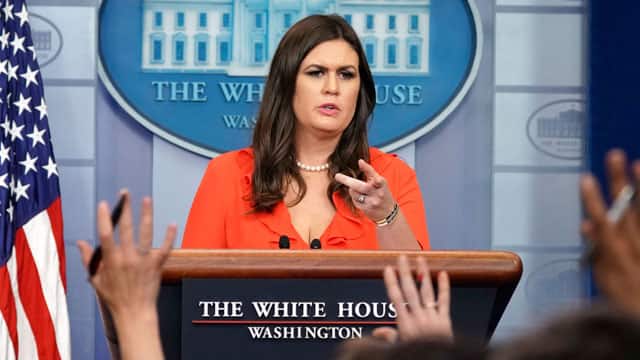 "Reckless, undignified behaviour has become excused and countenanced as 'telling like it is,' when it is actually just reckless, outrageous and undignified," said Flake. "And when such behaviour emanates from the top of our government, it is something else — it is dangerous to our democracy."

Flake evoked a quote from Republican president Teddy Roosevelt which begins: "The president is merely the most important among a large number of public servants. He should be supported or opposed exactly to the degree which is warranted by his good conduct or bad conduct."

Flake also called on his colleagues to put country before party when necessary.

"Were the shoe on the other foot, would we Republicans meekly accept such behaviour on display from dominant Democrats?" he asked. "Of course we wouldn't, and we would be wrong if we did."

Senate majority leader Mitch McConnell called Flake "a fine man" and said he was sorry to see him go.

John McCain, the senior senator from Arizona, who has been one of the few Republicans to consistently criticize Trump, was effusive in his praise for Flake.

Flake's decision to not run again was not unexpected, as he criticized the direction his party was heading in and expanded on his speech's themes in a book released earlier this year, Conscience of a Conservative: A Rejection of Destructive Politics and a Return to Principle.

'When he gets hit, he's going to hit back'

Trump has previously called Flake "weak and ineffective. White House press secretary Sarah Huckabee Sanders said Tuesday that the senator lacked support among voters and that stepping down was "probably a good move." 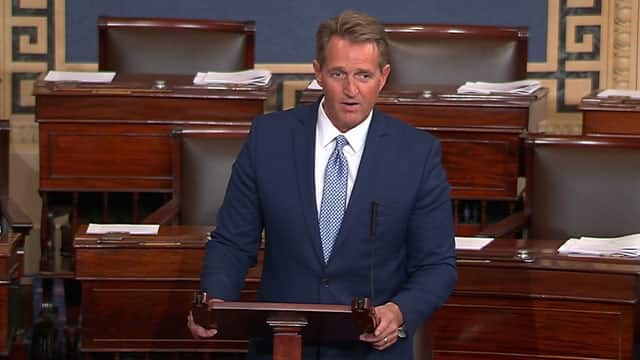 Republican Sen. Jeff Flake says 'I will not be complicit'

"When he gets hit, he's going to hit back, and I think Sen. Corker knows that and he's maybe trying to get a headline or two on his way out the door."

Flake's seat, like Corker's, will head to a Republican primary contest. There will be 33 Senate races in the midterm elections on Nov. 6, 2018, while all seats in the House will be contested.

Until Flake's plea, the latest Corker-Trump fireworks took prominence in D.C. on Tuesday.

Trump appeared to catch Corker's appearance early Tuesday on NBC's Today Show, when the senator claimed that the meeting later in the day between Trump and the Republicans was a photo op that was "not really about substance."

Trump also claimed that Corker had supported the nuclear deal that the U.S. and several countries struck with Iran. Corker in fact voted against the deal.

Trump's claims prompted a retort on Twitter from Corker, "Same untruths from an utterly untruthful president."

Corker used the hashtag #AlertTheDaycareStaff, harkening back to comments he made earlier in the month that the White House had become an "adult daycare centre."

Trump later in the morning issued a few more tweets directed at the Tennessee senator, including calling him "liddle Bob Corker," a reference to the senator's modest height.

Corker, who supported Trump for president, later told reporters on Capitol Hill it was a choice he regretted.

But Tuesday evening, Trump was praising some of his Republican colleagues.

So nice being with Republican Senators today. Multiple standing ovations! Most are great people who want big Tax Cuts and success for U.S.