In a combative opening debate, Hillary Clinton emphatically denounced Donald Trump for keeping his personal tax returns and business dealings secret from voters. The New York businessman repeatedly cast Clinton as a "typical politician" as he sought to capitalize on Americans' frustration with Washington.

Locked in an exceedingly close White House race, the presidential rivals tangled for 90 minutes over their vastly different visions for the nation's future. Clinton called for lowering taxes for the middle class, while Trump focused more on renegotiating trade deals that he said have caused companies to move jobs out of the U.S. The Republican backed the controversial "stop-and-frisk policing" tactic as a way to bring down crime, while the Democrat said the policy was unconstitutional and ineffective.

The debate was confrontational from the start, with Trump frequently trying to interrupt Clinton and speaking over her answers. Clinton was more measured and restrained, but also needled the sometimes-thin-skinned Trump over his business record and wealth.

"There's something he's hiding," she declared, scoffing at his repeated contentions that he won't release his tax returns because he is being audited. Tax experts have said an audit is no bar to making his records public. She said one reason he has refused is that he may well have paid nothing in federal taxes. He interrupted to say, "That makes me smart." 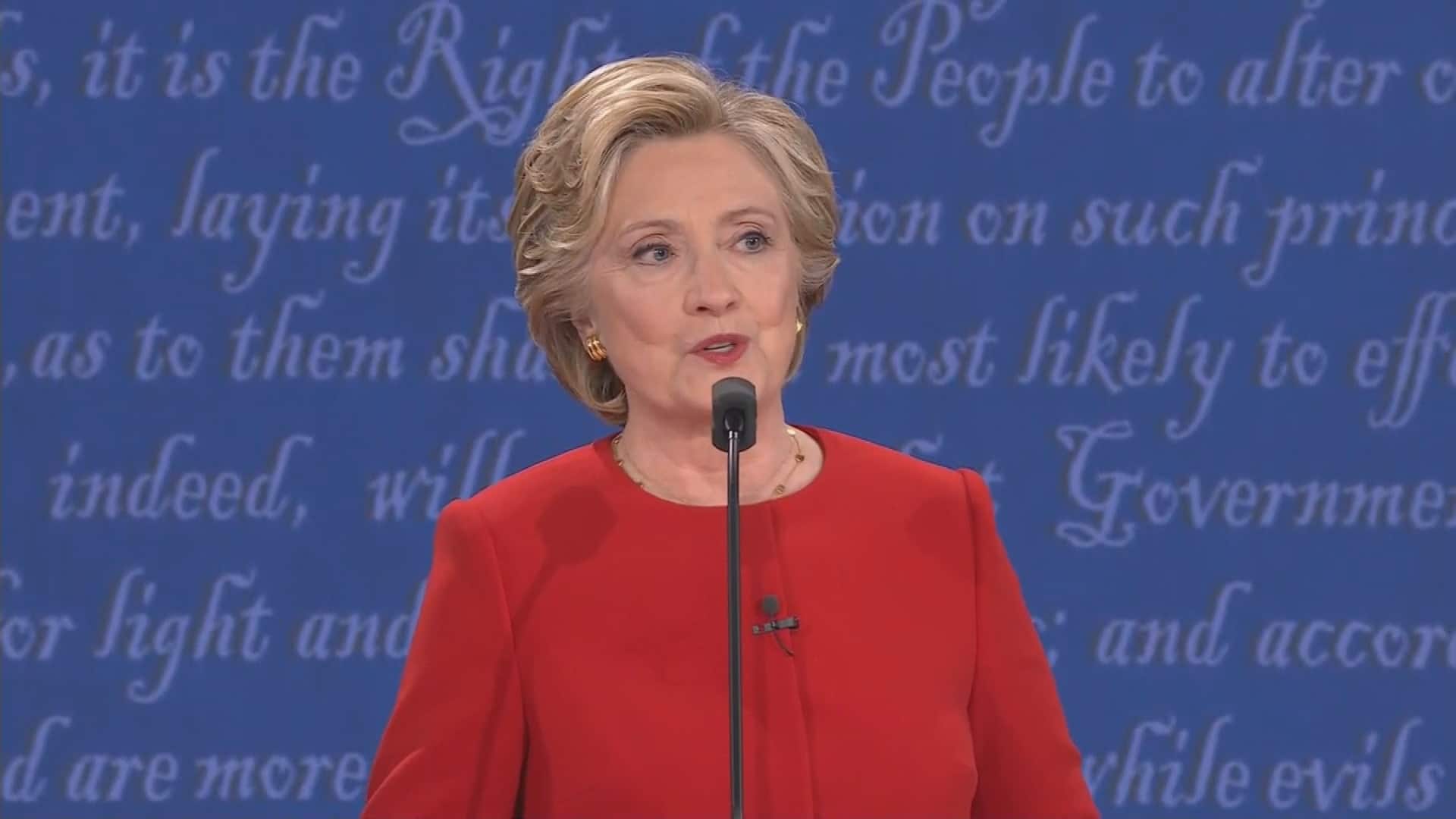 ‘Maybe he’s not as rich as he says he is’

Trump aggressively tried to turn the transparency questions around on Clinton, saying he would release his tax information when she produces more than 30,000 emails that were deleted from the personal internet server she used as secretary of state. 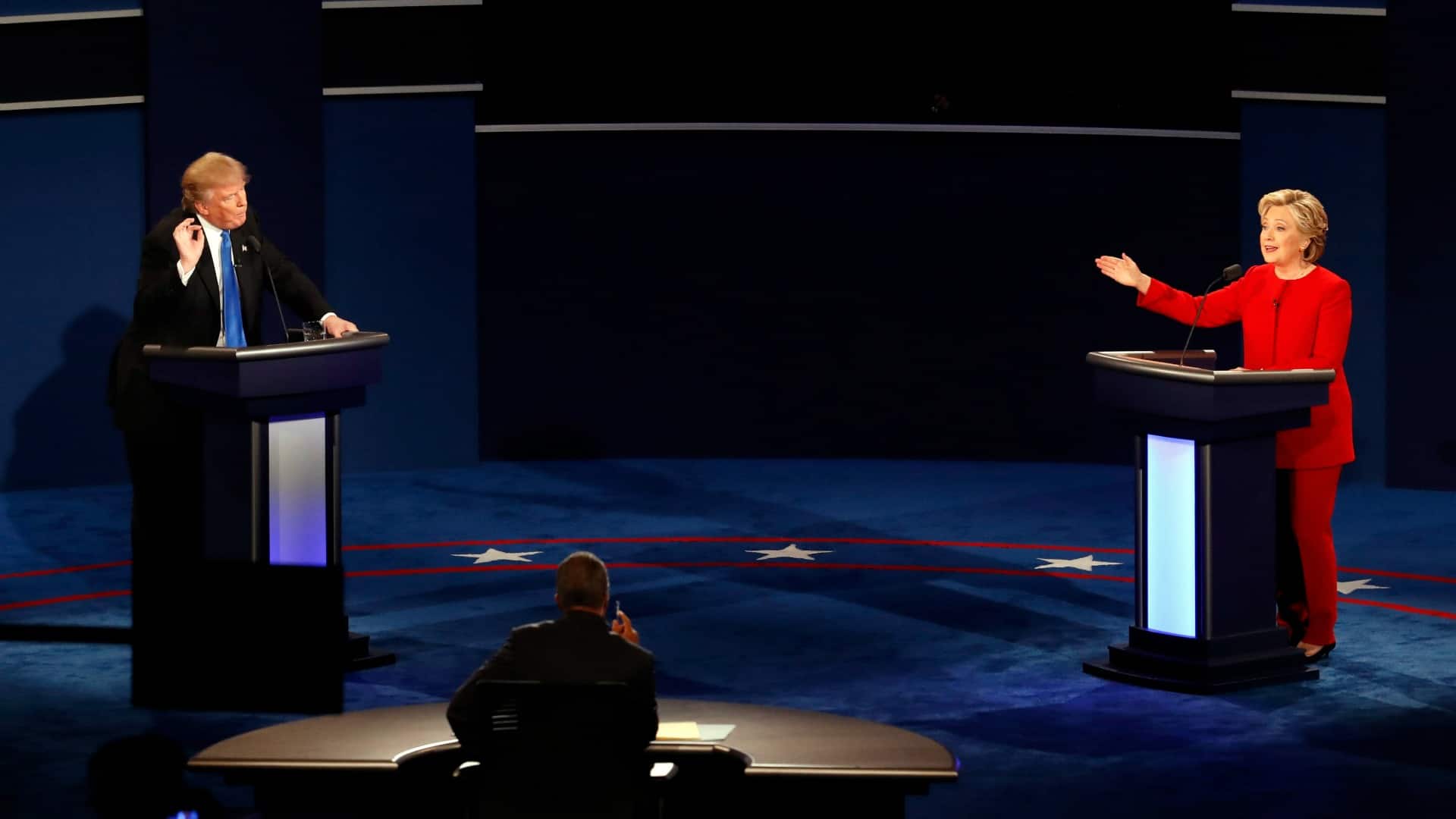 Trump's criticism of Clinton turned personal in the debate's closing moments. He said, "She doesn't have the look, she doesn't have the stamina" to be president. He's made similar comments in previous events, sparking outrage from Clinton backers who accused him of levelling a sexist attack on the first woman nominated for president by a major U.S. political party.

Clinton leapt at the opportunity to remind voters of Trump's numerous controversial comments about women, who will be crucial to the outcome of the November election.

"This is a man who has called women pigs, slobs and dogs," she said.

The televised faceoff was the most anticipated moment in an election campaign that has been both historic and unpredictable. Both sides expected a record-setting audience for the showdown at Hofstra University in suburban New York, reflecting the intense national interest in the race to become America's 45th president.

The centrepiece of Trump's case against Clinton was that the former senator and secretary of state is little more than a career politician who has squandered opportunities to address the domestic and international issues she's now pledging to tackle as president.

"She's got experience," he said, "but it's bad experience."

Both candidates portrayed themselves as best-prepared to lead a nation where many are still struggling to benefit from a slow economic recovery and are increasingly fearful of terror threats at home and abroad. When Trump jabbed Clinton for taking time off the campaign trail to study for the debate, she said, "I prepared to be president, and that's a good thing."

The candidates sparred over trade, taxes and how to bring good-paying jobs back to the United States.

Clinton said her Republican rival was promoting a "Trumped-up" version of trickle-down economics — a philosophy focused on tax cuts for the wealthy. She called for increasing the federal minimum wage, spending more on infrastructure projects and guaranteeing equal pay for women.

Trump panned policies that he said have led to American jobs being moved overseas, in part because of international trade agreements that Clinton has supported. He pushed her aggressively on her past support for the Trans-Pacific Partnership trade pact while she was serving in the Obama administration. She's since said she opposes the sweeping deal in its final form. 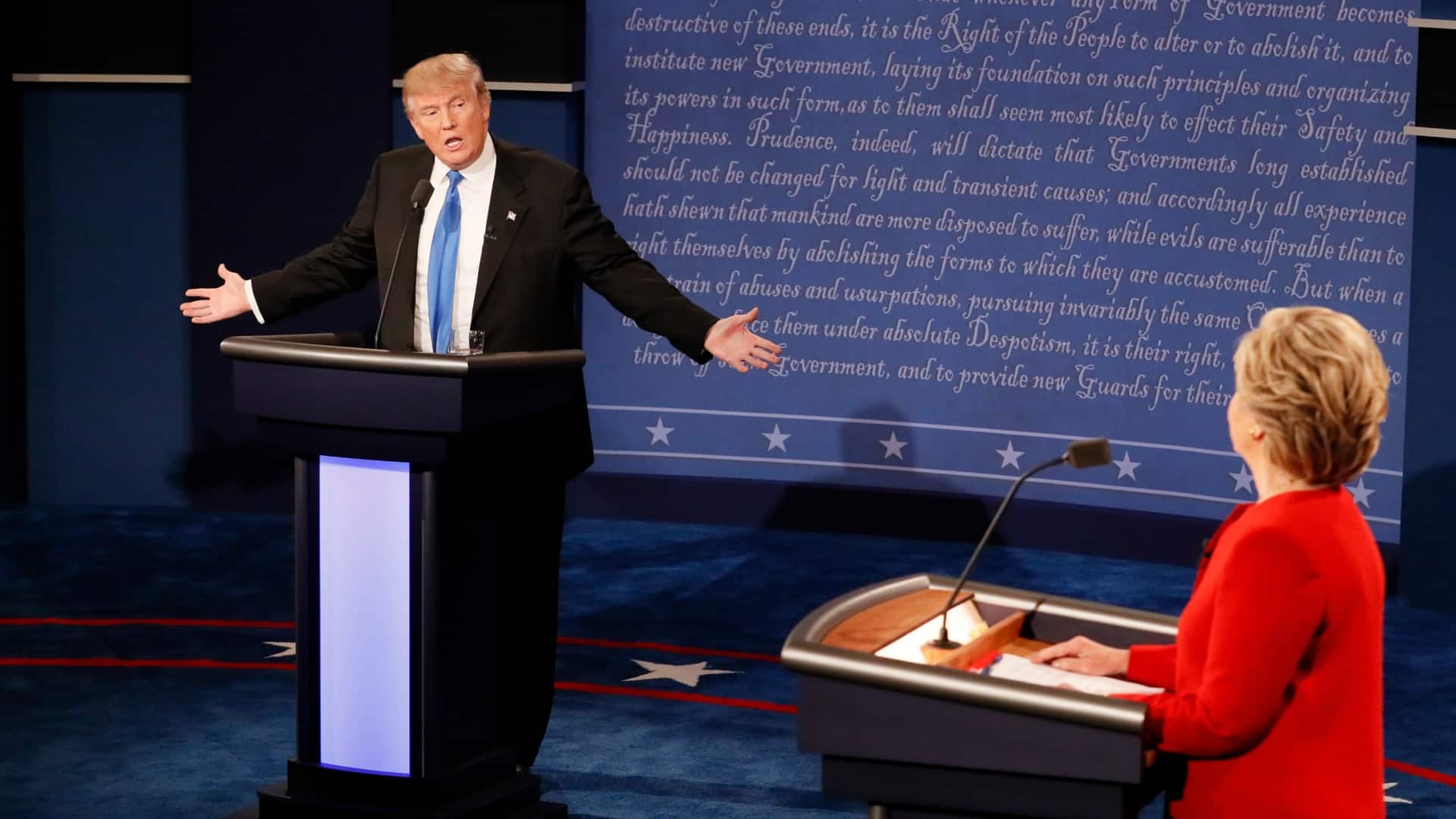 'You've been doing this for 30 years'

"You called it the gold standard of trade deals," Trump said. "If you did win, you would approve that."

Disputing his version of events, Clinton said, "I know you live in your reality."

Trump struggled to answer repeated questions about why he only recently acknowledged that Obama was born in the United States. For years, Trump has been the chief promoter of questions falsely suggesting the president was born outside of America.

"He has really started his political activity on this racist lie," Clinton charged. 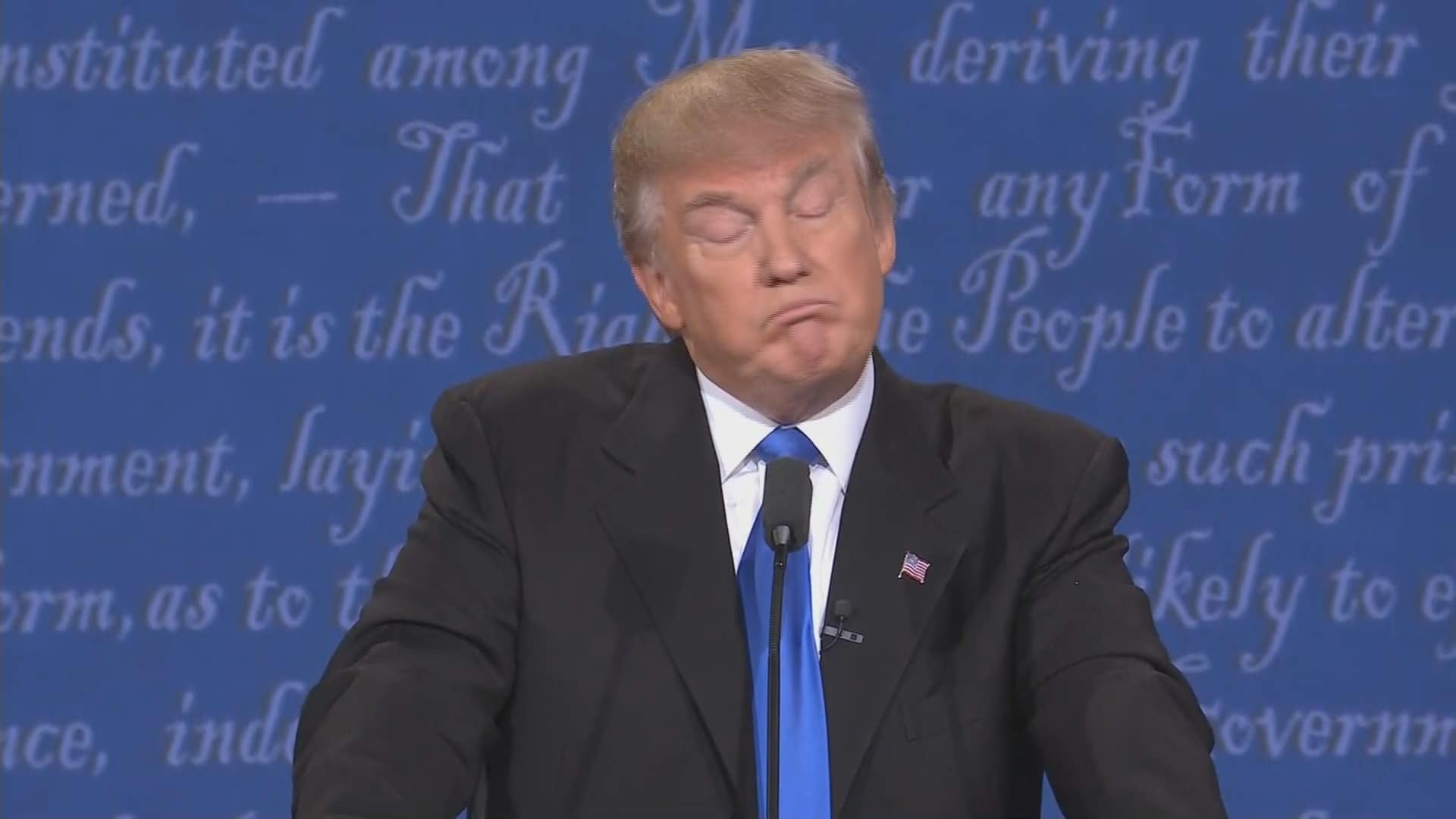 4 years ago
0:57
Trump asked about his persistence in questioning Obama’s place of birth 0:57

Trump also repeatedly insisted that he opposed the Iraq War before the 2003 U.S. invasion, despite evidence to the contrary. Trump was asked in September 2002 whether he supported a potential Iraq invasion in an interview with Howard Stern. He responded: "Yeah, I guess so."

Presented with the comment during the debate, Trump responded: "I said very lightly, I don't know, maybe, who knows."

The Republican also appeared to contradict himself on how he might use nuclear weapons if he's elected president. He first said he "would not do first strike" but then said he couldn't "take anything off the table."

Clinton said Trump was too easily provoked to serve as commander in chief and could be quickly drawn into a war involving nuclear weapons.

"A man who can be provoked by a tweet should not have his fingers anywhere near the nuclear codes," she said.

Trump replied: "That line's getting a little bit old."

Some frequently hot-button issues were barely mentioned during the intense debate. Illegal immigration and Trump's promises of a border wall were not part of the conversation.

And while Clinton took some questions on her private email server, she was not grilled about her family's foundation, Bill Clinton's past infidelities or her struggle with trustworthiness.