Donald Trump scored a powerhouse endorsement Friday as he sought to regain headway in a Republican presidential race that devolved into a series of fierce insults and schoolyard taunts heading into the weekend before critical Super Tuesday contests. 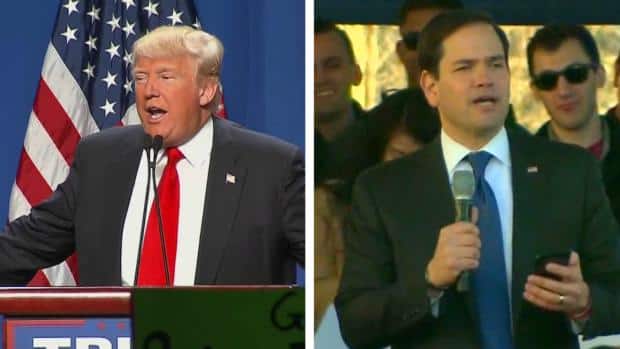 5 years ago
0:43
Republican rivals call each other out on public behaviour 0:43

Donald Trump scored a powerhouse endorsement Friday as he sought to regain headway in a Republican presidential race that devolved into a series of fierce insults and schoolyard taunts heading into the weekend before critical Super Tuesday contests.

New Jersey Gov. Chris Christie stunned the Republican establishment by swinging behind the New York billionaire, declaring "there is no better fighter than Donald Trump." Taking the cue, Trump unleashed a raw assault on Marco Rubio, who went after him with fury on the debate stage the night before.

Trump called the first-term Florida senator "a nervous basket case," "a choke artist," "a frightened little puppy" and insulted the size of his ears. "This is a low-life," Trump said of Rubio, not leaving out Texas Senator Ted Cruz.

"Cruz lies, but at least it's reasonable lies." Earlier, Rubio joked that Trump might have wet his pants backstage on debate night.

Christie's endorsement came after Rubio shattered months of relative peace with the Republican front-runner by repeatedly attacking Trump's character in the debate. Christie caught the room by surprise when he stepped out to join Trump at a Forth Worth news conference announcing the governor's support.

The shift marked the beginning of a long-awaited Trump takedown effort that was cheered by anxious Republicans nationwide who question Trump's party loyalty and fear he's unelectable in a general election.

Christie's support gave Trump an opportunity to turn the attention back to himself, as he has done repeatedly during trouble spots in the campaign. His critics acknowledge they are running out of time to stop him.

He's won three consecutive primary contests and looks strong in many of the 11 states participating in Tuesday's mega-round of voting. A close look at the delegate math suggests that he could have an insurmountable delegate lead by mid-March if trends don't change quickly.

Christie's endorsement is a blow to Trump's Republican competitors, not least Rubio, who had been courting the tough-talking New Jersey governor since he dropped his own presidential candidacy earlier in the month.

"Desperate people do desperate things," Christie said of Rubio's attacks while standing at Trump's side. "The idea that Marco Rubio can get inside Donald Trump's head is an interesting proposition."

Acknowledging "a sense of urgency," Rubio continued where he left off Thursday night as he campaigned in Oklahoma and gave a series of interviews designed to weaken his rival's tightening grasp on the Republican nomination.

"We have a con artist as the front-runner in the Republican Party," Rubio charged during an Oklahoma City rally. He also described a backstage encounter with Trump the night before during which Trump requested a full-length mirror "maybe to make sure his pants weren't wet."

At roughly the same time in Texas, Trump drew cheers after sharing his own backstage encounter with Rubio: "He was putting on makeup with a trowel," Trump said. "I will not say that he was trying to cover up his ears."

Trump's opponents concede that it might take an extraordinary "brokered" national Republican convention in July to stop him at this point. Yet his many critics in the Republican establishment cheered Rubio's aggressive shift, something they have been encouraging for months.

"Point is, there's still a pathway to beating him," said Liz Mair, a Republican strategist leading an anti-Trump group. "As of Wednesday, I wasn't convinced there really was."

On the Democratic side, Hillary Clinton claimed new headway on the eve of a South Carolina Democratic primary that she's expected to win handily.

"I think it does take me a little bit longer to get into the rhythm of campaigning," she said on MSNBC's Morning Joe. `'We hit our stride in Nevada. Our message of breaking all barriers is really beginning to take hold. I really felt we were on an upward trajectory."

Even if the Republican-backed Trump attacks don't work in the short-term, Clinton suggested he'd be vulnerable as the Republican nominee in the fall.

"When it moves to the general election, I think you're going to see a real seriousness," she said, "with people turning and saying, `What do we know about this man?"'

Cruz also joined the fray, speaking to reporters from Nashville, Tenn., about Trump's refusal to release his tax returns.

Cruz said if there's something in the returns that is going to cause concern, primary voters need to know.

"The last thing we want is to nominate someone who an audit demonstrates tax improprieties or tax frauds," Cruz said. "The voters deserve to know."

Cruz said he expects to have a "very good night" on Super Tuesday.

There was little sign that Trump's stock was falling at the Fort Worth rally where supporters gathered.

Many said they hadn't seen the Houston debate that shook him up. Those who had stood by their candidate and criticized the way his rivals teamed up on him.

"They come prepared to attack Trump at all costs," said Arlene Smart, 58, of Liberty, Texas. "I'm sick of lying in Washington. Trump is the man. That's all there is to it."

"I think most people see it as Washington's crooked attacks," she added.