Before their bilateral meeting, U.S. President Donald Trump praised Filipino strongman Rodrigo Duterte's hospitality, but said nothing about human rights as both leaders ignored shouted questions about the violent drug crackdown in the Philippines. The leaders also shared a laugh when Duterte called reporters "spies."

His lengthy Asia trip down to its final days, U.S. President Donald Trump opted Monday to publicly prioritize strategic interests over human rights, declining to shine a spotlight on the violent drug war overseen by his host in the Philippines.

Reporters saw the beginning of the leaders' bilateral meeting, during which Trump praised Duterte's hospitality, the organization of the summit he was hosting and even Manila's weather. Trump said nothing about human rights and both leaders ignored shouted questions about the violent drug crackdown. The two men also shared a laugh in the meeting when Duterte called reporters "spies."

The White House later said the two leaders discussed ISIS, illegal drugs and trade during the 40-minute meeting. White House spokesperson Sarah Huckabee Sanders said human rights came up "briefly" in the context of the fight by the Philippines against illegal drugs. She did not say if Trump was critical of Duterte's program. 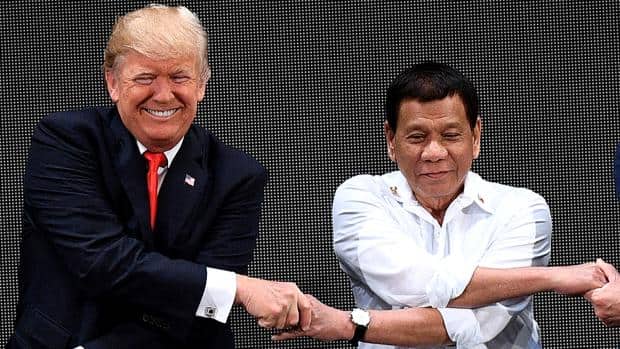 On the sidelines of an international summit, Trump looked to strengthen ties with Pacific Rim allies, aiming to strike bilateral, rather than multinational trade agreements, and increase pressure on North Korea to abandon its nuclear program. He met with India's Prime Minister Narendra Modi on Monday and highlighted their two nations' "deeper and more comprehensive" ties, looking to strengthen a relationship that is vital to the U.S. vision of an Indo-Pacific region that attempts to de-emphasize China's influence.

He jointly met with Australian Prime Minister Malcolm Turnbull, with whom he had a contentious phone call last winter, and Japanese Prime Minister Shinzo Abe, who hosted the president in Tokyo earlier in the trip. Trump raved about his accomplishments on his five-nation journey, particularly on trade and on North Korea, which the White House has suggested may be designated a state sponsor of terror.

Trump said he would wait until his return to Washington on Wednesday to elaborate with a "major statement" on those two topics but hinted at progress while in Manila.

"We've made some very big steps with regard to trade — far bigger than anything you know," Trump told reporters, pointing to business deals forged between U.S. and foreign companies.

"We've made a lot of big progress on trade. We have deficits with almost everybody. Those deficits are going to be cut very quickly and very substantially," Trump said.

"Except us," Turnbull chimed in, to laughs.

"You're the only one," Trump responded. Trump also said the trip had been "very fruitful" for the United States and pointed to the warm welcomes he had received in capitals like Tokyo, Seoul and Beijing.

"It was red carpet like nobody, I think, has probably ever received," Trump said. "And that really is a sign of respect, perhaps for me a little, but really for our county. And I'm really proud of that."

Trump met privately with Turnbull later Monday. But his interactions with Duterte drew the most scrutiny.

Advisers had said that while Trump was always unlikely to publicly chastise Duterte, he might offer criticisms behind closed doors. Trump would hold his tongue in public to avoid embarrassing Duterte, whom he is urging to help pressure North Korea and fight terrorism, and to avoid pushing him into the arms of China. Duterte has seemed less committed to the strategic partnership with the U.S.

Duterte's war on drugs has alarmed human rights advocates around the world who say it has allowed police officers and vigilantes to ignore due process and to take justice into their own hands. Government officials estimate that well over 3,000 people, mostly drug users and dealers, have died in the ongoing crackdown. Human rights groups believe the victim total is far higher, perhaps closer to 9,000.

The opening ceremonies of the Association for Southeast Asian Nations conference began with pageantry, including a group photo of the leaders and the summit's traditional handshake. That cross-body handshake, during which each leader shakes the opposite hands of those next to him or her, briefly baffled Trump, who then laughed as he figured out where to place his arms.