Although the Paris climate conference that opens Monday will not end with emissions targets enforceable by law, the talks are a chance for all countries to formally commit to reducing their ecological footprint, Environment Minister Catherine McKenna said Sunday. 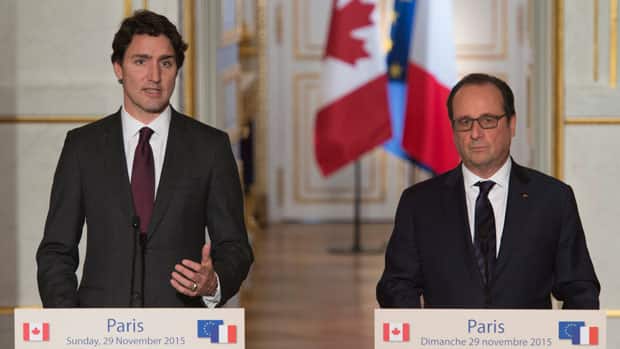 Trudeau, Hollande speak to the media

5 years agoVideo
10:02
The two leaders discussed a range of topics including climate change, the fight against ISIS and free trade 10:02

Although the Paris climate conference that opens Monday will not end with emissions targets enforceable by law, the talks are a chance for all countries to formally commit to reducing their ecological footprint, Environment Minister Catherine McKenna said Sunday.

"And it's really important we get everyone at the table, where everyone commits to do their fair share."

McKenna conceded that while the Liberal government has not come to Paris with targets of its own — it will stand by the targets set by the previous Harper government — she said that the Canadian delegation will reconvene 90 days after Paris to draft a made-in-Canada plan for lowering greenhouse gas emissions.

At a joint news conference after a luncheon, Trudeau said in French that he was impressed with the "personal courage" the French leader has shown since the Nov. 13 Paris attacks and welcomed his "leadership on security issues throughout the world."

Trudeau said the two discussed a "broad range" of topics during their first bilateral meeting, including climate change, the fight against ISIS and free trade.

"I'm very pleased to be here with the president to talk about the issue of climate change, and we will be working together to ensure there is a positive outcome from these two weeks of discussions," Trudeau said, adding in French that he was proud to stand next to a leader who has such a "grand vision" for tackling the "great issue of our time."

"I look forward to many more meetings, and close collaboration, with our French cousins."

Hollande said the goal of the climate change talks will be to "unite all nations to achieve an ambitious agreement. Ambitious necessarily means binding, so obviously each country will have its own responsibility to reducing greenhouse emissions."

The French leader said they discussed a number of approaches to fighting climate change, including the creation of a carbon market.

On the topic of international security, Hollande touted the "lasting friendship" between the two countries. "Terrorism is a threat against every country in the world. We have to unite our forces against this scourge," he said.

Trudeau joined a Quebec delegation for a visit to memorial set up outside the Bataclan concert hall for victims of the Paris attacks. 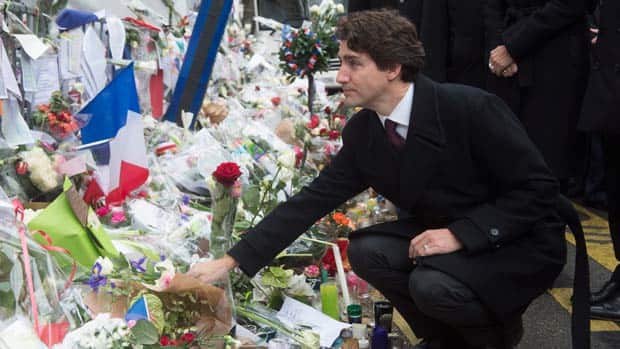 Trudeau said Canada will stand shoulder-to-shoulder with Hollande against terrorism, despite his pledge to pull fighter jets back from the fight against ISIS in Iraq and Syria.

"World security, terrorism issues, refugee issues and countering radicalization are the big subjects that draw us together ... Canada is pleased to be able to play a strong and positive role on the world stage now," Trudeau said.

Hollande said he wants Trudeau to visit France again, and he said French Prime Minister Manuel Valls will travel to Canada next year.

Emissions targets will not be legally binding

Trudeau said he was optimistic of a positive outcome from the climate talks despite the absence of credible emissions-cutting plans to stop global warming.

He said countries that don't make an effort to trim greenhouse gas emissions won't be looked upon kindly by their own citizens. 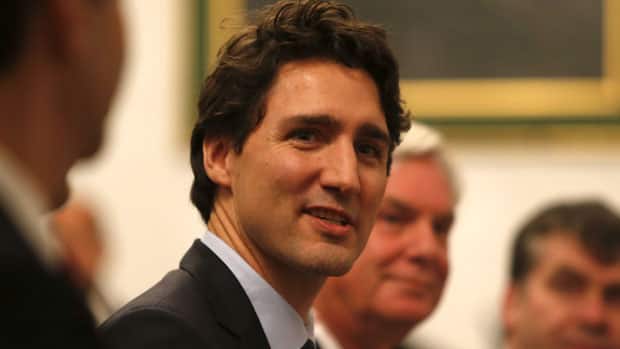 Participants at the UN summit, taking place from Monday to Dec. 11, are being urged to avoid repeating the failure of the 2009 climate talks in Copenhagen.

France said on Saturday almost all 193 governments in attendance had outlined plans for fighting global warming beyond 2020 in a step toward resolving obstacles to an agreement at the summit.

The meeting comes on the anniversary of the Holodomor, the systemic genocide of millions of Ukrainians between 1932 and 1933 by the Soviet regime.

"We believe that, along with the international community, Canada can play an important part in bringing this conflict to an end. As a country, we also remain committed to helping rebuild the democratic, economic, and security institutions that will help Ukraine flourish once more."

Trudeau had been expected to make a case for a comprehensive climate change agreement during his sit-down with his Indian counterpart, the leader of the world's third largest emitter of greenhouse gases.

With files from CBC's Rosemary Barton and Margo McDiarmid, and Reuters