Stranded Europe-bound truckers hoped Tuesday to receive the green light to get out of Britain soon, after some of the most dramatic travel restrictions of the pandemic were imposed on the country following the discovery of a potentially more contagious variant of the coronavirus.

'Non-essential travel discouraged, but transit should be facilitated,' EC says 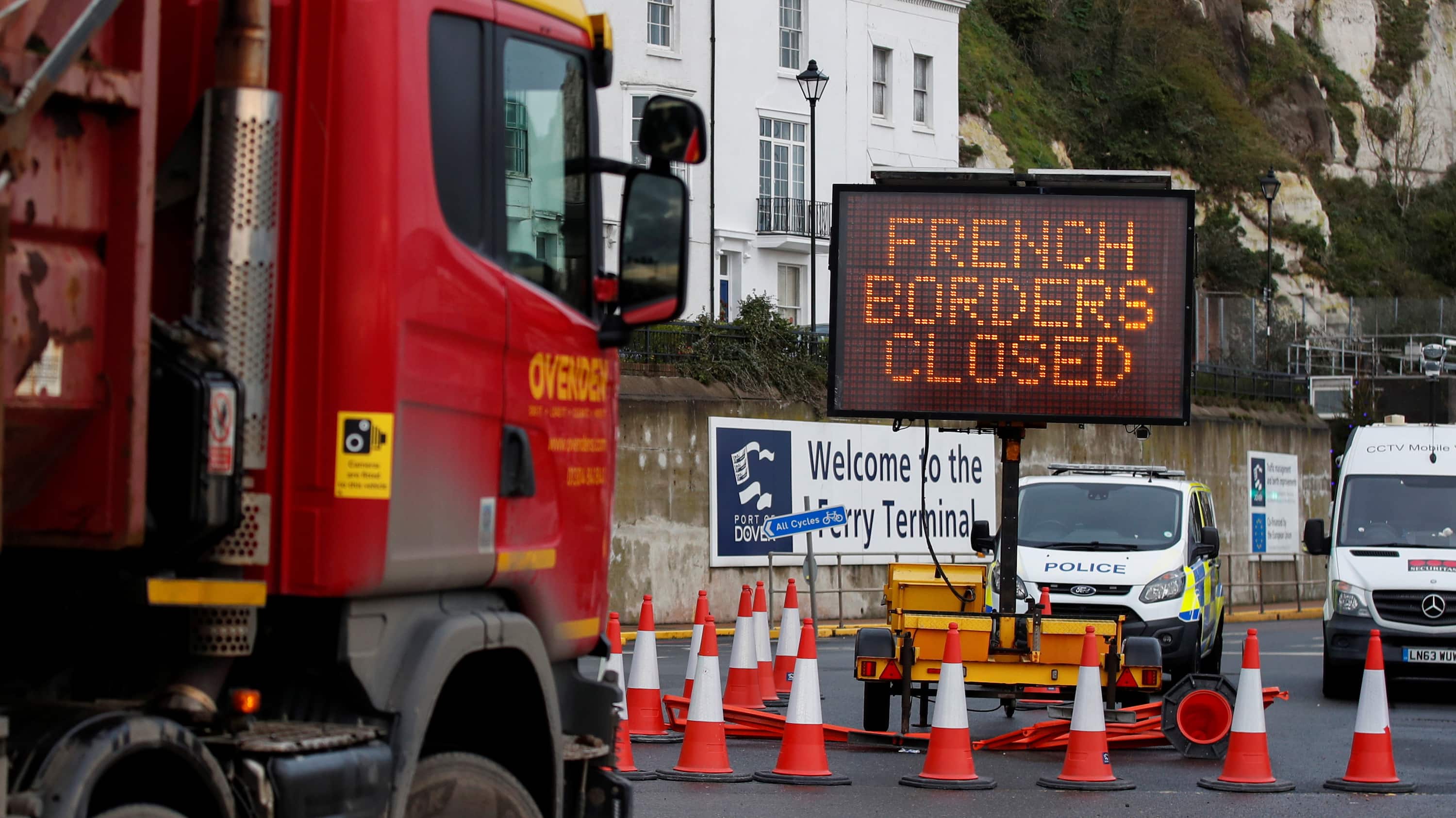 2 months ago
1:01
Hundreds of truckers who entered the U.K. from Europe are unable to go back through France after it blocked their re-entry over fears of a more virulent strain of the coronavirus in southeastern England. 1:01

Stranded Europe-bound truckers hoped Tuesday to receive the green light to get out of Britain soon, after some of the most dramatic travel restrictions of the pandemic were imposed on the country following the discovery of a potentially more contagious variant of the coronavirus.

More than 1,500 trucks snaked along a major highway in southeast England near the country's vital Channel ports or crowded into a disused airport, illustrating the scale of Britain's isolation after countries from Canada to India banned flights from the U.K. and France barred the entry of its trucks for 48 hours beginning Sunday night.

For a country of islands that relies heavily on its commercial links with France, that's potentially very serious — and raised concerns of food shortages if the restrictions weren't lifted by Wednesday.

Hopes increased over Tuesday that the stranded drivers may soon be able to get on the road again as the European Union's executive arm pushed for a co-ordinated response to the travel restrictions on the U.K.

The European Commission said people returning to their home countries or main places of residence should be able to do so provided they test negative for the virus or quarantine.

Although Justice Commissioner Didier Reynders said EU countries should work together to "discourage non-essential travel" between the bloc and Britain, he said "blanket travel bans should not prevent thousands of EU and U.K. citizens from returning to their homes."

The commission added that "cargo flows need to continue uninterrupted."

Home Secretary Priti Patel told BBC radio that the British government is "speaking constantly" with France to get freight moving again. France has said it wants to lift the ban as soon as possible and is looking at ways of testing drivers on their arrival.

While the French ban does not prevent trucks from entering Britain, many vehicles that carry cargo from the country to the continent return laden with goods. The fear is that will fall off — reducing deliveries to Britain at a time of year when the U.K. produces very little of its food and relies heavily on produce brought from Europe by truck.

Also, some drivers or their employers might decide against entering Britain for fear they won't be able to get back home.

The restrictions were creating a feeling of isolation in Britain akin to what the residents of Hubei province in China at the start of the year or those in northern Italy must have experienced a few months later.

Given that around 10,000 trucks pass through Dover every day, accounting for about 20 per cent of the country's trade in goods, retailers are getting increasingly concerned if there is no resolution soon.

Andrew Opie, director of food and sustainability at the British Retail Consortium, warned of potential shortages of food like lettuce, vegetables and fresh fruit after Christmas if the borders are not "running pretty much freely" from Wednesday.

The problem, he said, is the empty trucks sitting in England can't pick up new deliveries for Britain.

Over the weekend, British Prime Minister Boris Johnson imposed strict lockdown measures in London and neighbouring areas amid mounting concerns over the new variant to the virus, which early indications show might be significantly more transmissible.

As a result, Johnson scrapped a planned relaxation of rules over Christmastime for millions of people and banned indoor mixing of households. Only essential travel will be permitted.

Amid questions about whether vaccines being rolled out now would work against the new strain, the chief executive of BioNTech — the German pharmaceutical company behind one of those shots — said he was confident it would be effective, but further studies are needed to be completely sure.

Ugur Sahin said Tuesday that "we don't know at the moment if our vaccine is also able to provide protection against this new variant" but because the proteins on the variant are 99 per cent the same as the prevailing strains, BioNTech has "scientific confidence" in the vaccine.

There are mounting concerns that the whole of the U.K. will be put into a national lockdown after Christmas as new infections soar, including in Wales where 90 soldiers from the British Army will be reenlisted to drive vehicles from Wednesday to support health teams responding to emergency calls.

The British government's chief scientific adviser, Patrick Vallance, warned Monday that measures "may need to be increased in some places, in due course, not reduced." For many, that was code for another national lockdown.

While the new variant is being assessed, countries were trying to limit contact with Britain, even though there is evidence of the strain elsewhere already.

In Switzerland, for example, authorities are trying to track an estimated 10,000 people who have arrived by plane from Britain since Dec. 14 — and has ordered them to quarantine for 10 days.

Switzerland was one of the 40-odd countries to ban flights from the U.K. over concerns about the new variant.

The quarantine order is likely to affect thousands of Britons who may have already headed to Swiss ski resorts. Unlike many of its neighbors, Switzerland has left most of its slopes open, attracting enthusiasts from around Europe.

The virus is blamed for 1.7 million deaths worldwide, including about 68,000 in Britain, the second-highest death toll in Europe, behind Italy's 69,000.

The chaos at the border comes at a time of huge uncertainty for Britain, less than two weeks before it completes its exit from the EU and frees itself from the bloc's rules. Talks on a post-Brexit trade relationship between the two sides are deadlocked.