Tropical storm Florence continues to drench the central Carolinas as the death toll rises to at least 11, with winds rocking homes, ripping up trees and causing mass power outages.

'I hope we never see another one like that,' local resident tells CBC

It was like something out of a horror story — a tree crashing through the roof of Greg Dubose's home and into his kitchen as tropical storm Florence weaved a destructive and deadly path, drenching the Carolinas and causing mass power losses.

As dangerously high winds rocked homes and ripped trees from the ground, Dubose said he witnessed a "spooky" scene at his home in Wilmington, N.C.

"Friday morning the winds were real high. Trees across the street, they were folding and folding, and then all of a sudden, they just started popping one at a time," Dubose said in an interview with CBC's Ellen Mauro from the porch of his home Saturday.

Although tens of thousands of people have been forced out of their homes, and mass evacuations have been ordered, Dubose stayed put, as he did with Hurricane Fran in 1996, but said he had never experienced anything like Florence.

"It was really, really tense Friday morning. ... it was scary. I hope we never see another one like that."

Watch CBC's Ellen Mauro speak to a man who rode out the storm: 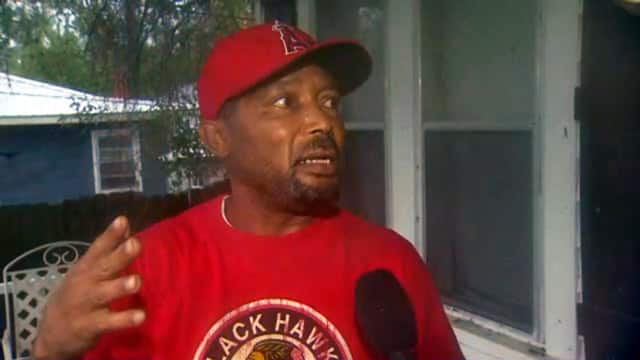 'Once I started feeling the house moving, I left': N.C. resident describes the power of Florence

2 years agoVideo
2:18
CBC's Ellen Mauro speaks with a resident of Wilmington, N.C., after his community was pummelled by tropical storm Florence. 2:18

The death toll from the slow-moving storm rose to at least 11 by late Saturday afternoon, when all coastal storm surge warnings were discontinued.

Forecasters with the U.S. National Hurricane Center predicted some of North Carolina's coastal counties could see up to a metre of rainfall by the time the storm fully passes next week. Florence is expected to swing north over the Appalachian Mountains and into the Ohio Valley on Monday.

At a press conference Saturday afternoon, North Carolina officials said rescuers in the coastal areas were searching for people by boat and by air, and had already taken hundreds of people to safety. And with rivers rising to record levels because of heavy rain, State Emergency Management Director Mike Sprayberry issued this caution: "Let me assure you this flooding is only going to get worse."

As of 8 p.m. ET on Saturday, Florence was crawling inland at 2 km/h, with its centre located about 100 kilometres east-southeast of Columbia, the South Carolina capital.

Political leaders in both Carolinas warned the potential for heavy rains would continue through tomorrow, with flash flooding expected over the next several days. Officials from North Carolina also urged travellers to avoid areas affected by the storm until floodwaters subside.

"I cannot overstate it: Floodwaters are rising, and if you aren't watching for them, you are risking your life," North Carolina Gov. Roy Cooper said.

The 11 deaths linked to the storm include:

The Cape Fear River flooding into downtown Wilmington <a href="https://t.co/Eml24WjliX">pic.twitter.com/Eml24WjliX</a>

"This is going to be a massive cleanup operation that will last for days, if not months."

Late Saturday, Trump tweeted: "Deepest sympathies and warmth go out to the families and friends of the victims. May God be with them!"

North Carolina's Harnett County has ordered a mandatory evacuation along the Lower Little River, which is expected to rise to more than 5.2 metres above flood stage.

"Rivers will rise days after the rain has stopped," said the North Carolina governor said. "In the east [of the state], they will crest Monday, Tuesday and Wednesday.

Cooper told reporters that 20,000 people are in 150 shelters, adding, "This storm will eventually leave our state … but now is the time for us to persevere. I've never known North Carolinans to quit in the face of a challenge."

A further 5,800 people in South Carolina were also in emergency shelters, according to state officials.

About 9,700 National Guard troops and civilians are using high-water vehicles, helicopters and boats to rescue people trapped by rising waters.

Officials in North Carolina's Harnett County, about 145 kilometres inland, urged residents of about 1,100 homes to clear out because the Lower Little River was rising toward record levels.

In New Bern, along the coast, homes were surrounded by water, and rescuers used inflatable boats to reach people. More than 360 people had been carried to safety since Thursday night amid rising waters from a river swelled by both rain and storm surge.

Kevin Knox and his family were rescued from their flooded brick home with the help of army Sgt. Johan Mackie, part of a team that was using a phone app to locate people in distress. Mackie rode in a boat through a flooded neighbourhood, navigating through trees and past a fence post to get to the Knox house.

"Amazing. They did awesome," said Knox, who was stranded with seven others, including a boy who was carried out in a life vest. "If not we'd be stuck upstairs for the next ... how long? I have no idea."

Steve Goldstein, who's with the U.S. National Oceanic Atmospheric Administration (NOAA), warns the deluge from the "nearly stationary" storm will cause "catastrophic flooding" inland through early next week.

Steady rain from the storm continues to present a danger. Watch below: Deer swim through flooded Jacksonville, N.C. neighbourhood. 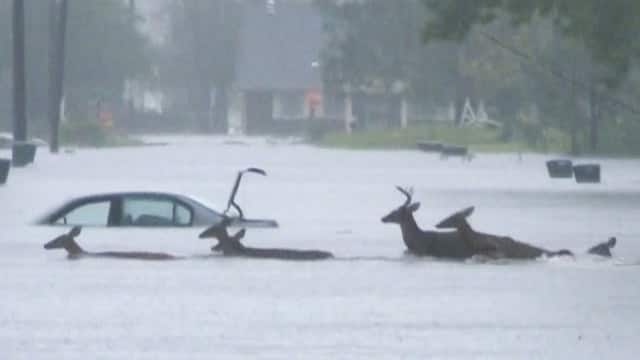 2 years agoVideo
0:49
The animals were spotted swimming across a residential street flooded by tropical storm Florence. 0:49

Florence peaked at a terrifying Category 4 with top winds of 225 km/h over warm ocean water before making landfall as a Category 1 hurricane at 7:15 a.m. on Friday at Wrightsville Beach, a few kilometres east of Wilmington and not far from the South Carolina line.

Power outages are widespread, affecting about 800,000 homes and businesses in North Carolina and 163,000 in South Carolina. Rescue crews have used boats to reach hundreds of people trapped by the rising waters.