At least 11 people died and dozens were injured in strong tornadoes that swept through the Dallas area and caused substantial damage this weekend, while 13 people died in flooding in the Midwest.

Days of tumultuous weather have led to dozens of deaths

At least 11 people died and dozens were injured in strong tornadoes that swept through the Dallas area and caused substantial damage this weekend, while 13 people died in flooding in the Midwest.

And officials in southern Arkansas say it appears a tornado touched down Sunday afternoon in Bearden as a severe weather system rolled into the region. There were no reports of injuries.

Ouachita County Sheriff David Norwood told the Arkansas Democrat-Gazette newspaper that the twister appeared to touch down in a four-block area along Main Street. He said the storm took roofs off buildings, uprooted trees and shattered storefront windows.

Norwood said streets into the area have been blocked to keep out looters.

It was the latest in a succession of powerful weather events across the country — from heavy snow in New Mexico, west Texas and the Oklahoma Panhandle — to flash flooding in parts of the Plains and Midwest. Days of tumultuous weather have led to 43 deaths overall — those in Texas, plus five in Illinois, eight in Missouri and 19 in the Southeast.

The full extent of damage from Saturday's storms along a nearly 64-kilometre stretch near Dallas came into clear focus. As many as 1,450 homes in Texas have been damaged or destroyed. Vehicles were mangled, power lines fell and trees were toppled. Heavy rain, wind and falling temperatures hampered cleanup efforts Sunday afternoon.

The Dallas/Fort Worth forecast office, and the National Weather Service said nine tornadoes touched town across North Texas, but they said the number may after they do more surveys on Monday.

Texas Gov. Greg Abbott made disaster declarations for four counties — Dallas, Collin, Rockwall and Ellis — on Sunday and warned that the number of victims could rise.

Abbott said the state will continue to face weather-related challenges for at least the next 24 hours.

"We need you to remain vigilant. We need you to listen to local authorities' warnings about action that you may need to take," said Abbott, which he said includes staying indoors and off the roads. 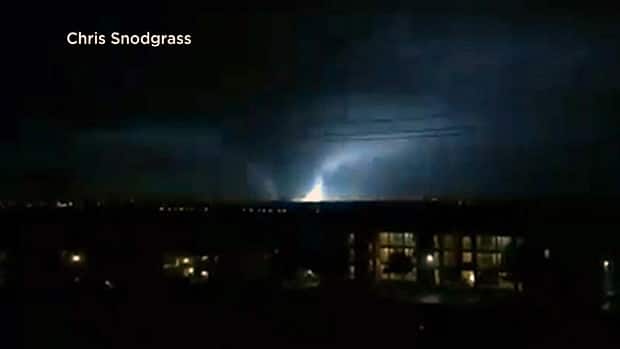 Abbott said there are shelters open across the state for those who need it. He said they expect rain-covered roads to turn to ice tonight.

Garland police Lt. Pedro Barineau said the impact on the community, about 32 kilometres northeast of Dallas, has been huge. Eight people died, 15 were injured and about 600 structures, mostly single-family homes, were damaged.

The weather service said an EF-4 tornado, which is the second-most powerful with winds up to more than 320 kph, hit the community at about 6:45 p.m. Saturday. At least three people who died were found in vehicles, said Barineau.

The destruction in Garland was so overwhelming that Dallas County Judge Clay Jenkins declared the city a disaster within mere minutes of seeing the toll firsthand.

"I don't declare local disasters lightly," Jenkins said. "But I looked at the scene for 10 minutes, spoke to the incident commander and then called the lawyers to bring the paperwork."

In the nearby town of Rowlett, City Manager Brian Funderburk said Sunday morning that 23 people were injured, but that there were no deaths and no reports of missing people. The weather service said damage indicated it was likely an EF-3 tornado, which has winds up to 266 kph.

Dale Vermurlen lived in a Rowlett neighbourhood that sustained heavy damage. His house only had minor damage, but was next to ones that were flattened.

"I grabbed both dogs by the collars and held on to the toilet. I said 'OK this could be it, boys."'

Homes in the neighbourhood that had been searched by emergency responders were marked with a black "X." In some instances, it looked like homes had been picked up and set back down in a big pile. State troopers were blocking off roads, utility crews were restoring power and people were walking around hushed and dazed.

"I grabbed both dogs by the collars and held on to the toilet. I said 'OK this could be it, boys."'- Dale Vermurlen, Rowlett, Texas, resident

Three other people died in Collin County, about 72.4 kilometres northeast of Dallas, according to sheriff's deputy Chris Havey, although the circumstances were not immediately clear.

National Weather Service meteorologist Matt Bishop in the Fort Worth office said the tornado outbreak at this time of the year for North Texas occurs "from time to time ... but it's certainly not something that happens regularly."

On the other side of the state, the Department of Public Safety in Amarillo strongly discouraged travel throughout the entire Texas Panhandle — a 26-county area covering nearly 70,000 square kilometres — because blowing and drifting snow had made the roads impassable. Interstate 40, the main east-west highway across the Panhandle, was almost completely shut down. DPS said only a small section of the highway in Amarillo remained open.

In far West Texas, up to 10 centimetres of snow fell overnight in the Alpine area, with 30-centimetre-deep drifts reported. Parts of Interstate 40 on the Texas-New Mexico border were closed Sunday due to snow.

State of emergency in Oklahoma

Meanwhile, Oklahoma Gov. Mary Fallin declared a state of emergency as there were blizzard conditions and an ice storm warning out west and flood warnings in the east,where one community had received 23 centimetres  of rain.

The state's Emergency Management Department has set up warming stations at churches and other locations. And the state Corporation Commission says 60,000 homes and businesses have lost electricity.

Officials in Altus, in the southwest corner of the state, have asked people to conserve water because of a power outage at a reservoir.

Six people died overnight when two separate vehicles drove into flooded roadways in south-central Missouri, Pulaski County Sheriff Ronald Long said, and KYTV reported that authorities recovered the body of a driver Saturday from a creek in the southwest part of the state. Also Saturday, three adults and two children drowned in southern Illinois when the vehicle they were riding in was swept away and sank in a rain-swollen creek.

The death toll in the Southeast linked to severe weather rose to 19 on Sunday when Alabama authorities found the body of a 22-year-old man whose vehicle was swept away while attempting to cross a bridge. Ten people have died in Mississippi, and six died in Tennessee. One person was killed in Arkansas.

Rowlett Tornado. My precious brother-in-law. That was their bedroom! <a href="https://t.co/3nB9AeP38I">pic.twitter.com/3nB9AeP38I</a>

with files from CBC