Women rally across Belarus as thousands detained in post-election protests

Hundreds of women rallied across the capital of Belarus on Wednesday to protest a brutal police crackdown that has left hundreds injured and thousands detained while challenging election results extending the 26-year rule of the country's authoritarian leader.

Hundreds of women rallied across the capital of Belarus on Wednesday to protest a brutal police crackdown that has left hundreds injured and thousands detained while challenging election results extending the 26-year rule of the country's authoritarian leader.

In several parts of Minsk, groups of women formed human chains, chanting "Shame!" and calling for an end to the crackdown in a bid to soften the ruthless official response to peaceful protests. Hesitant to use force against all-women rallies, police dispersed them without violence.

Protesters are contesting the official count showing President Alexander Lukashenko winning a sixth term with 80 per cent of Sunday's vote and the main opposition challenger garnering 10 per cent. Crowds have taken to the streets every night since to demand a recount.

Police deployed to break up the post-election protests have used batons, stun grenades, tear gas and rubber bullets. One protester died Monday amid the crackdown in Minsk, and scores were injured.

"We stand for a peaceful protest," said Ksenia Ilyashevich, a 23-year-old IT specialist who joined other women at a Minsk protest Wednesday. "We worked up the courage and came out to rally. We stand here for all."

Another demonstrator, 29-year-old Lyudmila Arutyunova, said, "We need to support each other when the authorities beat us."

"We have information that medical workers are obligated to report all injuries and wounds to the police, and doctors see the protesters not as victims but rather as enemies of Belarus's stability," Viasna lawyer Pavel Sapelko said.

In three nights of protests, at least 6,000 people have been detained and hundreds injured, according to the official count, but even that high toll appeared to downplay the crackdown's scope. Anguished relatives were besieging prisons across Belarus trying to find their missing relatives.

Belarusian state news agency Belta reported Wednesday that police detained "co-ordinators of mass riots" in Minsk. The detained men allegedly "managed hundreds" of protesters and were accused of paying them to participate in the unrest, Belta said.

Nearly 30 journalists are among those detained, the Belarusian Association of Journalists said Wednesday. Three have already been sentenced to 10 to 15 days of administrative arrest, and 25 more remain in custody, awaiting their turn to face a court. 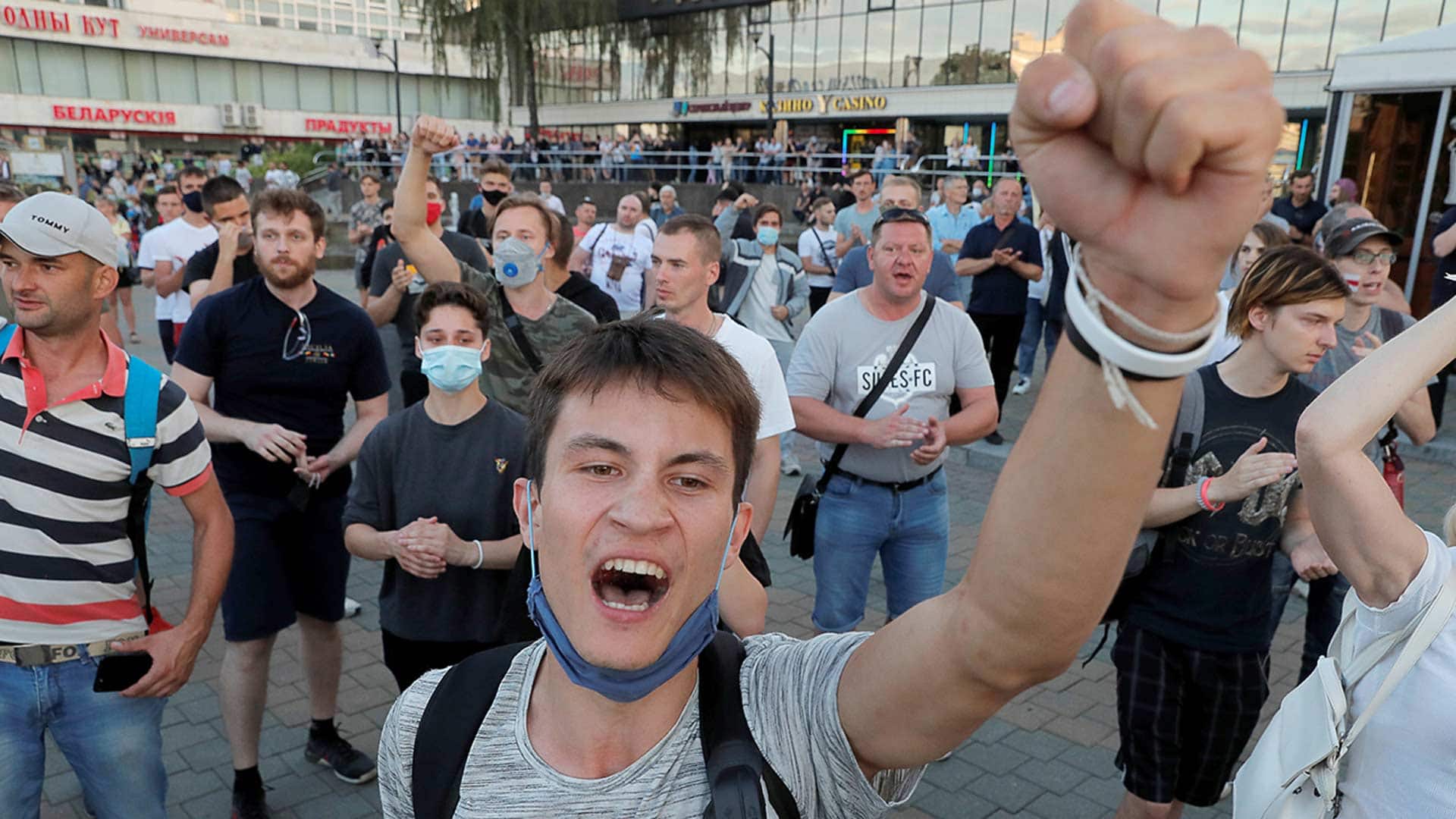 3 months ago
2:00
Protests continued in Belarus after the incumbent President Alexander Lukashenko's dubious landslide victory with 80 per cent of the vote in Sunday's national election. Opposition leaders call the result preposterous and only possible through vote-rigging. 2:00

During the protests on Tuesday night, reporters from several Belarusian and international outlets were beaten up. Officers seized memory cards from a group of photographers, including one for The Associated Press, as they took photos of the police crackdown.

"A deliberate hunt for journalists with independent Belarusian and foreign media has begun," said Boris Goretsky, vice-president of the journalists association.

Lukashenko, who has ruled the country with an iron fist since 1994, has derided the political opposition as "sheep" manipulated by foreign masters and vowed to continue taking a tough position on protests.

His top challenger, Sviatlana Tikhanovskaya, a 37-year-old former teacher and political novice, managed to unite fractured opposition groups and draw tens of thousands to her campaign rallies after two top potential challengers were barred from the race. She entered the election to replace her husband, an opposition blogger who aspired to run but has been in jail since his arrest in May.

But she left for neighbouring Lithuania on Tuesday in an abrupt about-face, hours after submitting a formal request for a recount. In a video recorded before departing that her associates said was filmed under pressure from law enforcement officials, she urged her supporters to end protests.

The actions by police this week have drawn harsh criticism from the European Union and the United States.

Developments in Belarus will be on the agenda of an urgent meeting of EU foreign ministers on Friday, EU foreign policy chief Josep Borrell tweeted.

The meeting was called a day after Borrell said that the 27-nation bloc would review its relations with Belarus and whether to take "measures against those responsible for the observed violence, unjustified arrests and falsification of election results."

In 2016, the EU lifted most of the sanctions it slapped on Belarus in 2004 after Lukashenko, once dubbed "Europe's last dictator in the West," freed political prisoners and allowed protests.

This year, the economic damage caused by the coronavirus and the president's swaggering response to the pandemic — which he airily dismissed as "psychosis" — has fuelled broad anger, helping swell the opposition ranks and prompting the Belarusian leader to unleash a renewed crackdown on dissent.

Meanwhile, Lithuania, Poland and Latvia are ready to mediate between the Belarusian government and the opposition, Lithuanian President Gitanas Nauseda said on Wednesday.

First, Nauseda said, Belarusian authorities must stop violence against protesters, release detained demonstrators and form a national council with members of civil society that would seek to find a way out of the crisis.

"If our initiative is met in a negative way, of course, the other means remain on the table — and that is sanctions, either at the European level or at the national level," Nauseda told reporters in the Lithuanian capital, Vilnius.