Absence may make the heart grow fonder, but holding hands may have kept it beating for two teens who doctors suspect were struck by lightning in California on Thursday when they were strolling hand in hand. 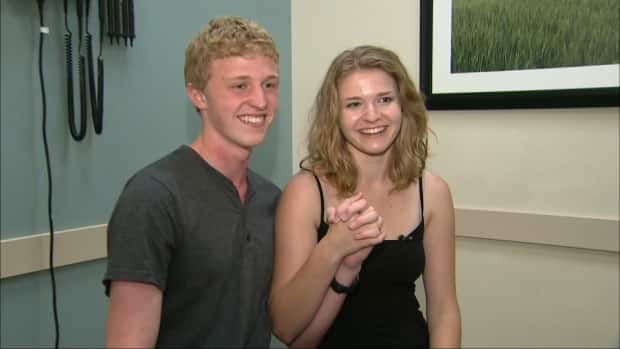 Couple lucky to be alive after being struck by lightning

Absence may make the heart grow fonder, but holding hands may have kept it beating for two teens who doctors suspect were struck by lightning in California on Thursday when they were strolling hand in hand.

Dylan and Lexie, who were identified by their first names only, were walking along a tree-lined street in Claremont, Calif., as a severe thunderstorm moved through the area.

"It was more of just kind of shove, you know, and it felt kind of like I was getting hit over the head with metal or something," Dylan told CBS Los Angeles.

The teenagers say a witness told them he saw the lightning bolt strike. Dr. Stefan Reynoso said their lives were probably spared because their arms were locked.

"These two are lucky that they were holding hands," he said. "It helped to diffuse that electrical current that ran through their bodies.

"The chance of getting hit by lightning is very uncommon and perhaps one in a million."

Reynoso says the two are doing fine, and the two now joke about their "electric love," CBS Los Angeles reports.