U.S. President Donald Trump is endorsing stricter gun-control measures, including raising the minimum age to 21 for possessing a broader range of weapons, and continues to talk about the possibility of arming teachers in the aftermath of yet another mass school shooting.

U.S. President Donald Trump endorsed stricter gun-control measures on Thursday, including raising the minimum age to 21 for possessing a broader range of weapons.

He tweeted his strongest stance as president one day after an emotional White House session where students and parents poured out wrenching tales of lost lives and pleaded for action.

"I will be strongly pushing Comprehensive Background Checks with an emphasis on Mental Health. Raise age to 21 and end sale of Bump Stocks!" Trump said on Twitter, without immediately offering more details.

"Evil walks among us and God help us if we don't harden our schools and protect our kids," said NRA executive vice-president and CEO Wayne LaPierre. "The whole idea from some of our opponents that armed security makes us less safe is completely ridiculous."

Speaking at the CPAC conference, LaPierre sharply criticized the media and delivered an unbowed defence of gun ownership and lashed out at Democrats, saying they are using the tragedy for "political gain." 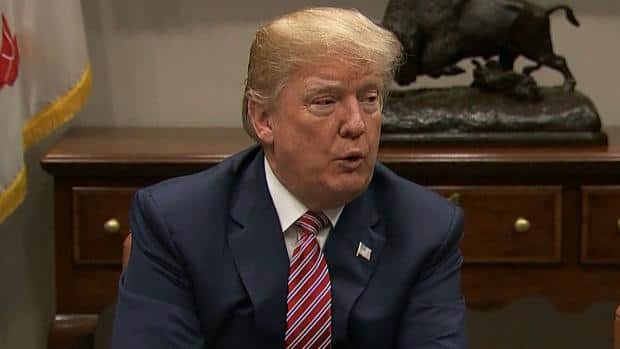 The current federal minimum age for buying or possessing handguns is 21, but the limit is 18 for rifles, including assault-type weapons, such as the AR-15 used by a former student in last week's attack on a Florida high school that killed 17 students and staff members.

The White House said Thursday that Trump does not want to ban sales of an entire class of firearms despite mounting pressure to put assault weapons such as the one used in the Florida shooting out of civilian reach.

"What we're looking for is solutions that don't ban a class of firearms for all individuals but ban all weapons for certain individuals who are identified as threats to public safety," spokesperson Raj Shah said.

Despite his new push for at least some gun-control changes, Trump stressed his backing for the NRA, saying on Twitter that "the folks who work so hard at the NRA are Great People and Great American Patriots. They love our Country and will do the right thing. MAKE AMERICA GREAT AGAIN!"

He also repeated his urgent call for trained teachers or others in schools to carry guns as a deterrent to attacks.

"If a potential 'sicko shooter' knows that a school has a large number of very weapons talented teachers (and others) who will be instantly shooting, the sicko will NEVER attack that school. Cowards won't go there … problem solved. Must be offensive, defence alone won't work!" Trump tweeted.

I never said “give teachers guns” like was stated on Fake News <a href="https://twitter.com/CNN?ref_src=twsrc%5Etfw">@CNN</a> &amp; <a href="https://twitter.com/nbc?ref_src=twsrc%5Etfw">@NBC</a>. What I said was to look at the possibility of giving “concealed guns to gun adept teachers with military or special training experience - only the best. 20% of teachers, a lot, would now be able to

....immediately fire back if a savage sicko came to a school with bad intentions. Highly trained teachers would also serve as a deterrent to the cowards that do this. Far more assets at much less cost than guards. A “gun free” school is a magnet for bad people. ATTACKS WOULD END!

Revisiting an idea he raised in his campaign, Trump's comments come as lawmakers in several states are wrestling with the idea, including in Florida, where the 17 most recent school shooting victims are being mourned.

"Our most valuable, most precious resources are our children. Why in the world are we going to put them in a circumstance where there is nobody that is armed and trained at any of our schools to be able to respond quickly to an active shooter situation?" Steube told The Associated Press, even as students, including survivors of the Parkland shooting, rallied at the state's capitol in support of changes in gun laws. 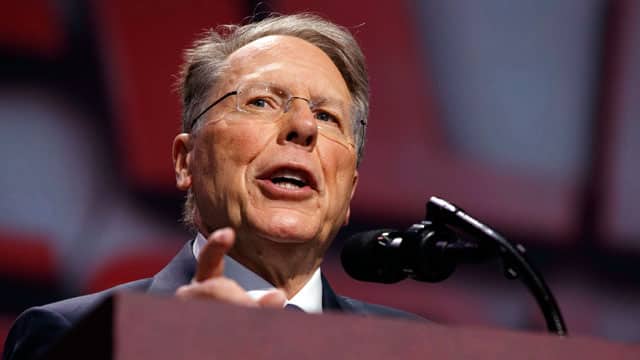 3 years ago
4:45
Any sort of gun ban is a non-starter for the National Rifle Association, but that doesn't mean some of its members don't believe reforms should be made - beginning with a pitch from the NRA president for more heavily secured schools. U.S. President Donald Trump is considering a wide range of reforms, including increasing the age for purchasing assault rifles, and stepped-up background checks 4:45

"Our students do not need to be sitting ducks. Our teachers do not need to be defending themselves with a No. 2 pencil," Republican Alabama Rep. Will Ainsworth said in proposing a bill days after the Valentine's Day shooting in Florida.

A 19-year-old former student at Stoneman Douglas, Nikolas Cruz, has been charged with carrying out the Parkland shooting. Authorities say he was armed with a semiautomatic AR-15 assault-style rifle that he had purchased legally last year.

The armed officer on duty at the Florida school where a shooter killed 17 people never went inside to engage the gunman and has been placed under investigation, officials said Thursday.

The school resource officer at the high school took up a position viewing the western entrance of the building that was under attack for more than four minutes, but "he never went in," Broward County Sheriff Scott Israel said at a Thursday news conference. The shooting lasted about six minutes.

The officer was suspended without pay and placed under investigation, then chose to resign, Israel said.

The debate goes well beyond statehouse walls: teachers — and the public — are divided on the issue.

"It just really hit home that these teachers, all they could do was pile those kids in a corner and stand in front of them and hope for the best," said Hansen, who carries a concealed handgun as she teaches special education students.

"I'm not here to tell all teachers that they have to carry a gun," she said. "For me personally, I felt that it was more of a solution than just hiding in a corner and waiting."

Utah is among at least eight states that allow, or don't specifically prohibit, concealed weapons in K-12 schools, according to the Giffords Law Center to Prevent Gun Violence.

Victoria Barrett, a writing teacher from Indianapolis told CBC News Network that she would never carry a gun in the classroom.

"That is not my job. That is not coherent with my beliefs in the world. I do not intend under any circumstance to ever take a person's life," said Barrett, who wrote about her views in the Washington Post.

"I think that there are a lot of measures that we can take and try and explore. But this one seems to me to likely to only make things worse."

In Austin, Texas, teacher Tara Bordeaux can't easily see herself taking on that role, preferring to leave it to trained law enforcement officers.

'Hold off until help arrives'

Claude, Texas, Independent School District superintendent Brock Cartwright won't reveal how many or who among his teachers is armed, but the district's message to potential intruders blares that staff members are armed.

Like other administrators, Cartwright said armed teachers are just one part of safety plans that include drilling for emergencies and shoring up buildings. The small town east of Amarillo doesn't have a police department, raising concerns about the potential response time for law enforcement.

"Hopefully, we never have to use it," Cartwright said, "but if we do, our thought is we're going to hold off until help arrives."

The president of the 1.7 million-member American Federation of Teachers, Randi Weingarten, called arming teachers "one of the worst ideas I have heard in a series of really, really, really bad ideas."

Nevertheless, a tweeted offer by Butler County, Ohio, Sheriff Richard Jones to train local teachers to carry a concealed handgun garnered so much interest that he quickly capped the number at 300.