'We are going to send this back': Malaysia returning unwanted Canadian plastic

Malaysia is denouncing Canada's "irresponsible" export of plastic waste, becoming the second Asian nation to make plans to ship Canadian trash back across the ocean.

UPDATE: This story was updated on May 29, 2019, to include new information about what the Malaysian government plans to do with the Canadian container. Read on for details.

Malaysia is denouncing Canada's "irresponsible" export of plastic waste, becoming the second Asian nation to make plans to ship Canadian trash back across the ocean.

On Tuesday, Malaysian officials opened a shipping container filled with plastic bags from major Canadian chains, as well as product packaging stamped with "Made in Canada" labels from recognizable brands.

"I think you need to take back your rubbish," Malaysian Environment Minister Yeo Bee Yin told a CBC News crew at Port Klang, a sprawling facility outside Kuala Lumpur.

Authorities did not identify which company exported the plastic from Canada. But they said it will be returned to that exporter after it was deemed to be too contaminated and of insufficient value for legitimate recyclers in Malaysia to take it in.

Watch the latest on the situation from CBC News in Malaysia: 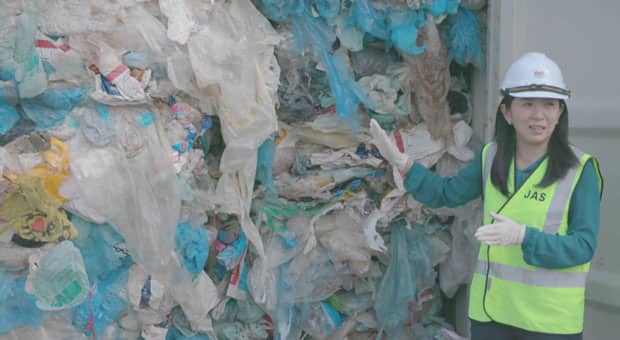 2 years agoVideo
1:36
Malaysia became the second Asian nation to make plans to ship Canadian trash back across the ocean, calling the export 'irresponsible.' 1:36

It's not known if the plastic in Malaysia came from a municipal recycling program, but shipping waste halfway around the world and back is not likely what Canadians think of when they drop plastic for recycling into their blue bin.

"I hope this will make Canadians angry as well," the environment minister said. "This is the irresponsible export of plastic, of waste. It's household garbage, it smells bad."

Malaysian officials said Wednesday they will first try to have the importer in Malaysia pay the cost of shipping the container back to Canada. They're still not naming the exporter, citing an ongoing investigation.

If that fails, officials said they would try to demand Ottawa pay to return the waste. Failing that, the next step would be to have Canada pay to have it sent to a landfill or incinerated in Malaysia.

Malaysia, which is cracking down on incoming waste from several countries, said it hopes to have the waste issue resolved within the next few weeks.

Malaysia's move comes amid an outcry in the Philippines over containers of fetid waste that have been stuck there for years.

Dozens of containers filled with contaminated plastic and other waste are set to leave the Philippines bound for Canada this week after a diplomatic brouhaha over the rubbish, which was sent abroad by a Canadian company in 2013 and 2014.

The years-old issue came to light again recently when President Rodrigo Duterte lashed out over the garbage, saying in late April that the garbage was going back to Canada — with or without help from authorities in Ottawa.

The Philippines issued bombastic complaints about Ottawa delaying the return of the container, and eventually moved to recall its envoys to Canada.

With the departure of the containers now imminent, Filipino Foreign Minister Teodoro Locsin Jr. had some choice words about the issue on Twitter.

ALL CONTAINERS CONTAINING GARBAGE CLEANED AND READY TO GO. WAITING FOR A COUPLE OF DOCUMENTS AND ROUTINE PERMISSION FROM CHINA FOR TRANSSHIPMENT TO CANADA. DEPARTURE IS MAY 30. Anybody gets in the way one way or another, I will screw you dry. Don't provoke me.

The story of Canada's plastic waste — first in the Philippines and now in Malaysia — has travelled across Asia.

More than 100 journalists were present when Malaysian authorities opened the Canadian container, along with containers from the U.S., China, Japan and Saudi Arabia.

"We are going to send this back to Canada," Malaysia's environment minister told CBC News. "We really hope the people of Canada will demand better tracking and monitoring of your waste recycling."

What's in the container?

CBC's team in Malaysia found plastic bags and packaging from several Canadian grocery giants, including Loblaws, No Frills, Walmart and Costco. The bin also held product packaging from bread and meat companies, like Dempster's and Schneiders.

It's not known how these items ended up with the waste sent to Malaysia, which has just 50 licensed plastic recyclers. Those licensed operators are allowed to import containers full of plastic from countries like Canada, and are required to adhere to specific environmental regulations.

But the government estimates there are likely hundreds of other operators — some remote and illegal, others existing under the cover of a legitimate licence holder — that are potentially operating outside the rules.

While some plastic is broken down into pellets for re-use, local authorities have said those "under the radar" operators are known to dump, bury and burn less valuable plastics.

Enormous piles of dust-like plastic residue is left to contaminate groundwater, and often leaves a haze over certain regions of the country.

It's a long way from what many consumers in Canada likely expect when they take their blue box to the curb.

Plastic recycling is a multi-billion dollar global business. Only certain higher-value plastics are in demand in North America for recycling, and the United States has much of the capacity.

For years, China was the destination of choice for plastic waste, taking in virtually any consumer or industrial product for recycling. But contaminated imports, worsening air pollution and a shifting economy prompted Chinese authorities to abruptly ban imports of plastic for recycling in 2017.

Brokers in the developed world, including in Canada, struggled to find new markets to send the plastic from millions of blue boxes. For many months, it was piled high in Canadian warehouses or incinerated.

Then Chinese operators shifted their businesses to neighbouring countries, including Malaysia, the Philippines and Thailand. They joined existing recyclers in once again welcoming the developed world's plastic.

Canadians recycle just 11 per cent of all the plastics we use — much of it sent far away to be recycled, or otherwise.

That has prompted some groups in Canada to call for a reduction in the use of plastics, rather than a reliance on recycling. Especially as the nations where the developed world sends some of its plastic to be recycled are increasingly closing the door.

With files from CBC's Eric Szeto