Even in world's most-documented war, justice is a 'long-term game': Nahlah Ayed

To all those who risked their lives for years to gather evidence of atrocities in Syria's inexhaustible war: the international community is finally catching up.

To all those who risked their lives for years to gather evidence of atrocities in Syria's inexhaustible war: the international community is finally catching up.

Yet despite it being one of the best documented conflicts ever, exacting justice for the worst of Syria's war crimes, and from its highest-ranking perpetrators, is still a long way off, given the persistent international paralysis on dealing with the matter.

It's an awkward message to send as Catherine Marchi-Uhel, the woman heading the United Nation's awkwardly named International, Impartial and Independent Mechanism (IIIM) begins her work this week.

She's belatedly charged with collecting and protecting the unprecedented troves of evidence of war crimes that already exist: shocking photos, video, documents, electronic files and other evidence spirited out of Syria documenting industrial-level incarceration, torture and wholesale murder of civilians and prisoners.

Some of it was originally prepared by the Syrian regime itself. Most of it has been gathered by ordinary Syrians, many working for local or international NGOs—at extreme personal risk, but with justice as the ultimate goal.

She begins meetings with Syrian civil groups later this week.

"The message I send to them is that … I don't want them to have collected material and evidence in vain," she said in an interview from Geneva, where the IIIM is headquartered.

"I'm telling them that we are going to make the best use of this information and evidence they have collected."

Though she acknowledges all this does not happen "overnight."

The new legal team's very existence is the by-product of the bitter international tug of war over how, or even whether, to bring accountability to a six-year war still defined by impunity. 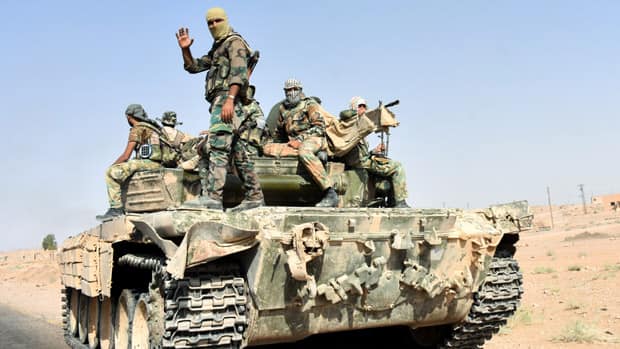 Syria's War | What could be coming next

3 years ago
6:46
The war in Syria has dragged on for years. CBC's The National provided a guide, below, on how we got here, and what may happen next 6:46

The UN General Assembly created the IIIM in December after Russian (and Chinese) opposition stalled the desire of members of the Security Council to refer Syria to the International Criminal Court. (A council reference is necessary because Syria is not party to the ICC).

There is no tribunal yet to prosecute any cases IIIM prepares. But Marchi-Uhel, a former French judge appointed in July to head the team, insists that her team still brings Syrians a step closer to justice.

In the short term, Marchi-Uhel's promise means trying to be useful to the prosecutors of isolated cases being brought against mostly low-level perpetrators to courts in individual Western countries.

In yet more evidence of the international community's failure to co-operate on ending impunity in Syria, one of the best prospects so far of prosecuting any Syrian war crimes is actually happening in countries like Germany, Spain and Canada.

Often brought forward by individual displaced Syrians, those cases have relied on private evidence gathering efforts,  including the work of NGOs, both international and local.

Marchi-Uhel says her yet-to-be-hired team of about 50 people could be supporting those efforts "within months."

But her legal team's work will likely be most valuable in the long term—gathering and safely preserving evidence until international players can agree on a mechanism to  prosecute Syria's worst crimes and its highest ranking perpetrators.

Or until Syria itself is capable and interested in prosecuting cases for its own internal peace.

Crimes in class of their own

The latter seems so long off that Marchi-Uhel isn't even welcome in Syria. She did write asking to meet with Syrian officials, to no avail.

A former judge who has tried crimes relating to Cambodia and the former Yugoslavia, she acknowledges that the nature and volume of Syria's alleged war crimes — as well as the challenges — are in a class of their own.

For one, the war continues, and its related atrocities keep piling up. There are countries and entities that are entirely opposed to her mission. Contributions to fund the team are voluntary for UN members. There are concerns about her ability to be impartial given she comes from a country involved in the Syria war, fighting against ISIS.

Then there's the cautionary tale of an existing UN Commission of Inquiry on Syria. A member of the panel quit in August because of the lack of will on the Security Council to find a legal answer to the impunity in Syria.

There is also the fact that the General Assembly doesn't have the power to create a tribunal to prosecute future cases IIIM prepares — something Marchi-Uhel hopes will change in the future.

Still, the start of its work could have a deterring effect, she says hopefully.

It will be "an important effort to preserve the evidence and signal the UN's resolve to one day bring the perpetrators to justice," says Payam Akhavan, a Canadian former UN prosecutor at The Hague and professor of International law at McGill University.

But without the option of the ICC, the IIIM, is "a second-best solution to the problem of impunity," he says.

All this is why he believes there's a far simpler route to expediting the quest for justice—one he's urging Canada in particular to pursue.

"We need a more immediate judicial response .… And if the ICC isn't an option, then the International Court of Justice is a powerful alternative."

The ICJ cannot hear criminal trials. But Akhavan has argued that a country like Canada could use the UN Convention against Torture to file a complaint against Syria for failing to ensure perpetrators of torture in its notorious prisons are brought to justice.

He says "an authoritative judgment" against Syria for crimes against humanity at the ICJ "could have the same effect as unexecuted ICC arrest warrants."

"All it requires is a government like Canada to seize the initiative … a unique opportunity for Canada to rise to the occasion and exercise moral leadership," he says. The office of the minister of Global Affairs did not respond to queries on whether such an approach is being considered.

"There can be no peace without justice," adds Akhavan. "International criminal justice is a long-term game."