Turkey has launched a military operation in northeast Syria just days after U.S. troops pulled back from the area, with airstrikes and artillery hitting Kurdish YPG militia positions around border towns.

Turkey moved ground forces into northern Syria on Wednesday, after launching airstrikes and firing artillery, as part of an offensive aimed at crushing Kurdish fighters, just days after U.S. troops pulled back from the region.

Turkish President Recep Tayyip Erdogan gave the name of the operation — "Peace Spring" — on his official Twitter account Wednesday, and said the aim was to eradicate "the threat of terror" against Turkey.

Turkey had been poised to enter northeast Syria since U.S. troops, who had been fighting with the Kurds against Islamic State in Iraq and Syria (ISIS), started to leave the area in an abrupt policy shift by U.S. President Donald Trump. The withdrawal was widely criticized in Washington as a betrayal of Washington's Kurdish allies.

Several large explosions rocked Ras al-Ayn, just across the border across from the Turkish town of Ceylanpinar, a CNN Turk reporter said. The sound of planes could he heard above and smoke was rising from buildings in Ras al-Ayn, he said. People were fleeing the town, witnesses said.

Turkey had long threatened an attack on the Kurdish fighters, considered by Ankara to be terrorists and an extension of a domestic insurgency led by the Kurdistan Workers' Party (PKK).

Trump again defended the U.S. pullout, in a new statement released after Turkey launched its offensive, saying he "did not want to fight these endless, senseless wars — especially those that don't benefit the United States."

The 5 European members of the UN Security Council - Belgium, France, Germany, Poland and the U.K. - have requested a closed meeting on <a href="https://twitter.com/hashtag/Turkey?src=hash&amp;ref_src=twsrc%5Etfw">#Turkey</a>’s military offense into <a href="https://twitter.com/hashtag/Syria?src=hash&amp;ref_src=twsrc%5Etfw">#Syria</a> to be held tomorrow ~ diplomats

He said Turkey must commit to protecting civilians and religious minorities in the area.

"The United States does not endorse this attack and has made it clear to Turkey that this operation is a bad idea," said Trump.

U.S.-backed Kurdish fighters have halted operations for now against ISIS, given the military offensive from Turkey, two U.S. officials and a Kurdish military source said earlier.

Kurds 'didn't help us in Normandy'

Trump defended his decision to withdraw U.S. troops from northern Syria, despite his country's past alliance with the Kurds in fighting ISIS, telling reporters at the White House, "they didn't help us in the Second World War, they didn't help us with Normandy as an example," referring to the Allied invasion of Europe during that war.

Trump on the Kurds: "They didn't help us in the Second World War, they didn't help us with Normandy, as an example." He suggests that they battled alongside U.S. forces for "their land," and adds, "With all of that being said, we like the Kurds." <a href="https://t.co/4aFGJiQquv">pic.twitter.com/4aFGJiQquv</a>

The Pentagon said in a statement its overall "force presence" in northern Syria hasn't changed, but that U.S. forces have been moved from the path of Turkish forces.

In addition to driving the Kurdish YPG militia, which it deems a security threat, away from its border, Turkey aims to create a space where two million Syrian refugees can be settled. Turkey has taken in over three million refugees, but aid groups have said the repatriation is much too soon, given the violence and destruction still evident in the country.

Turkey is getting help in its efforts from rebel allies in Syria.

"Strike them with an iron fist, make them taste the hell of your fires," a statement from the National Army, the main Turkey-backed rebel force, told its fighters. 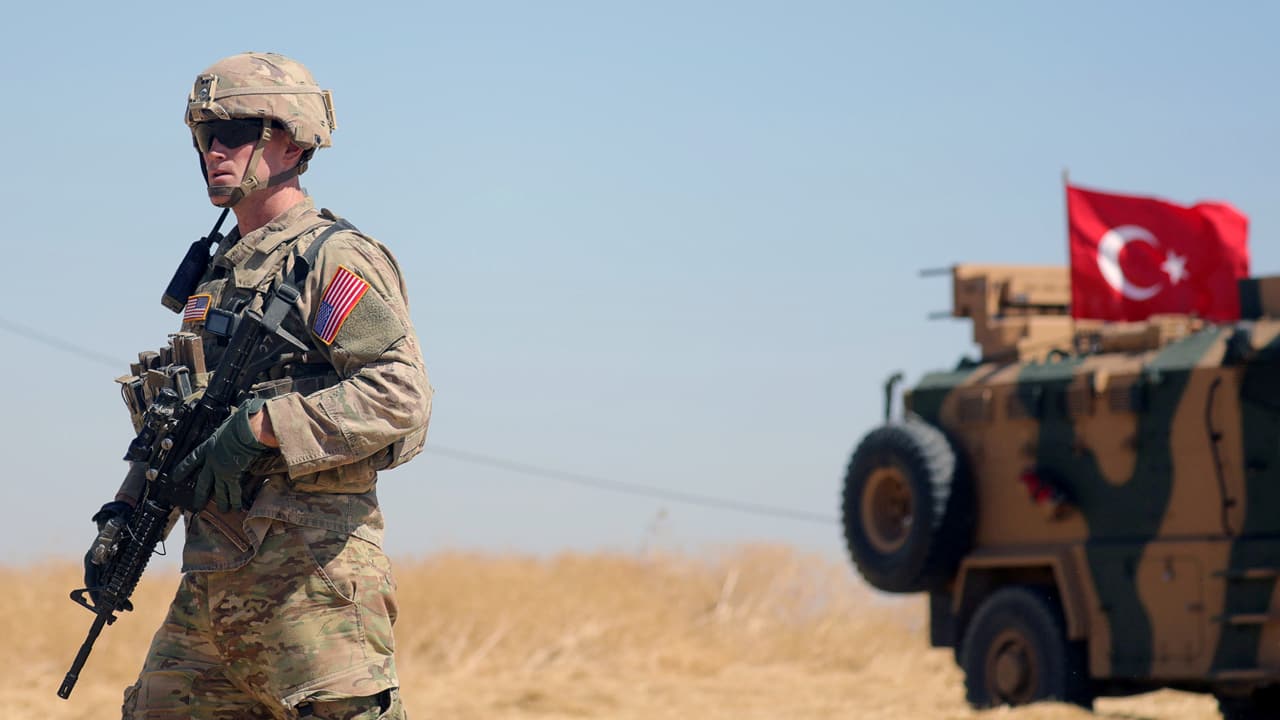 1 year ago
2:08
U.S. President Donald Trump announced that the U.S. is pulling its troops from northern Syria, which raised concerns that the area will be at risk of an attack from Turkey.  2:08

In its call for mobilization, the local Kurdish authority known as the Autonomous Administration of North and East Syria urged the international community to live up to its responsibilities as "a humanitarian catastrophe might befall our people" in the region.

"We call upon our people, of all ethnic groups, to move toward areas close to the border with Turkey to carry out acts of resistance during this sensitive historical time," it said.

The Kurds also said they want the U.S.-led coalition to set up a no-fly zone in northeast Syria to protect the civilian population from Turkish airstrikes.

The SDF is holding thousands of ISIS fighters in several detention facilities in northeastern Syria, and has warned that the incursion might lead to the resurgence of the extremists.

Watch: From Sept. 29 — The uncertain future of those in prison camps 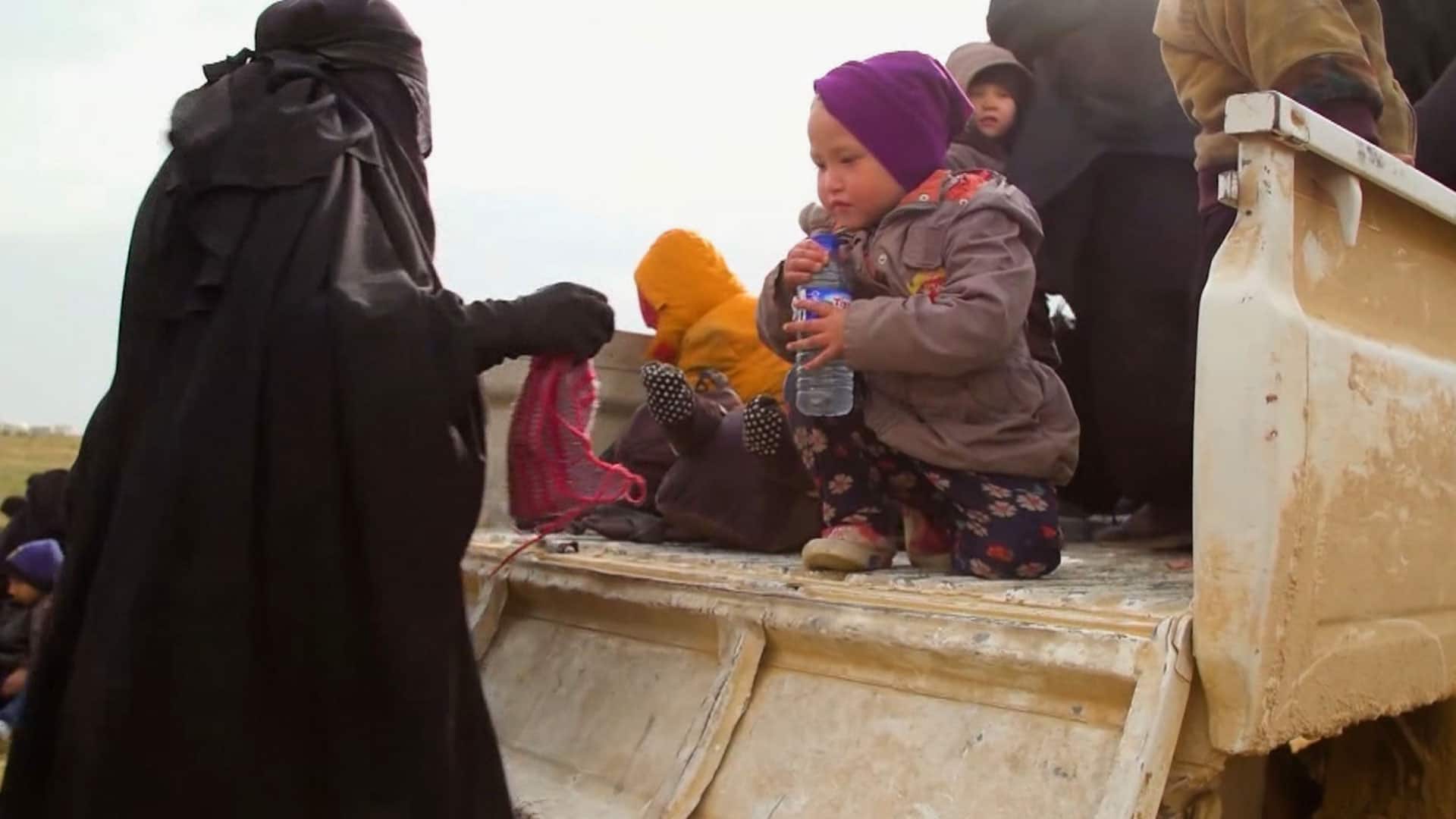 2 years ago
5:09
Thousands of captured foreign ISIS fighters face an uncertain future in Kurdish prison camps as some want to return home, including several Canadians. 5:09

An estimated 100,000 people are held in and around camps in the region, including 68,000 in al-Hol camp, Fabrizio Carboni, International Red Cross regional director for the Near and Middle East, said on Wednesday.

Carboni said those at the camp represent dozens of countries, and he called on his nations to repatriate them.

"So our message to all states that have citizens in those camps is take responsibility, to be courageous, because we know it's a major political and security challenge," he said.

Few countries have seemed willing to take back their citizens, who may be hard to prosecute, and the issue has led to fierce debate in Canada and elsewhere.

Erdogan reportedly talked to Vladimir Putin before the offensive and told the Russian president in the phone call that the operation would help peace and stability in Syria.

Another Assad ally, Iran, urged Turkey to show restraint and avoid military action in northern Syria, although it said Turkey was "rightfully worried" about its southern border.

'Who the hell supports Erdogan over the Kurds?'

Reaction in the West was swift. In the U.S., Republican Sen. Lindsey Graham, a Trump ally who nevertheless has criticized the president's decision to withdraw troops, joined with Democratic Sen. Chris Van Hollen in announcing proposed legislation to issue sanctions on Turkey. The measures would include targeting the U.S. assets of Erdogan.

On Monday, a day after Trump said troops would be pulled from northern Syria, Graham said the withdrawal from border positions "ensures an ISIS comeback."

I am pleased to have reached a bipartisan agreement with Senator <a href="https://twitter.com/ChrisVanHollen?ref_src=twsrc%5Etfw">@ChrisVanHollen</a> on severe sanctions against Turkey for their invasion of Syria. <br> <br>While the Administration refuses to act against Turkey, I expect strong bipartisan support. <a href="https://t.co/Ph5fIVt7k3">pic.twitter.com/Ph5fIVt7k3</a>

Under the plan he announced Wednesday, the U.S. would impose sanctions on any military transactions with Turkey and set sanctions on anyone who supports Turkey's domestic energy industry for use by its armed forces.

"Who the hell supports Erdogan over the Kurds?" Graham said before announcing the proposals. "The president's doing this completely against everybody else's advice."