U.S.-backed Syrian Kurdish forces captured a strategically important airbase from Islamic State militants in north Syria on Sunday in the first major victory for the group since the U.S. airlifted the forces behind enemy lines four days ago. 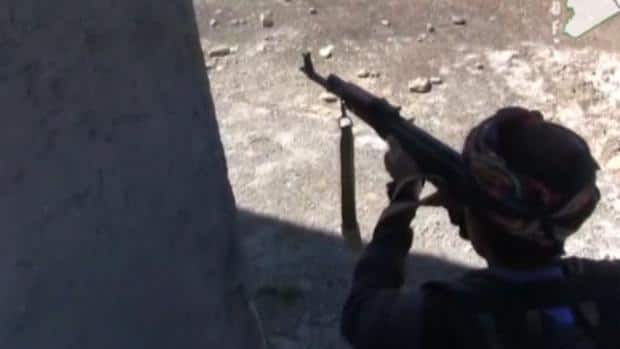 U.S.-backed Syrian Kurdish forces captured a strategically important airbase from ISIS militants in north Syria on Sunday in the first major victory for the group since the U.S. airlifted the forces behind enemy lines four days ago.

The U.S., which has provided substantial air and ground support to the SDF, ferried hundreds of SDF forces — as well as U.S. military advisers and U.S. artillery — behind ISIS lines earlier this week.

The airlift was a major development to the SDF's multi-front campaign to bear down on Raqqa as U.S.-backed Iraqi forces simultaneously press their assault to seize Mosul from the militants in neighbouring Iraq. SDF forces are within 10 kilometres of Raqqa from the north.

Tabqa airbase was captured by ISIS militants from the Syrian government in August 2014. Shortly afterward, the group announced it had killed about 200 government soldiers at the base, in a mass killing recorded and distributed on video over social media.

Concerns over dam near Raqqa

Meanwhile there were conflicting reports over whether civilians had begun evacuating Raqqa due to concerns over the stability of the nearby Tabqa Dam.

The militants said U.S.-led coalition airstrikes had locked up the dam's gates, causing the water level behind it to rise. The activist group Raqqa is Being Slaughtered Silently reported that ISIS had ordered Raqqa residents to evacuate, though without their furniture. Tabqa Dam is 40 kilometres upstream of Raqqa on the Euphrates River.

U.S.-backed Syrian Kurdish forces were in control of a spillway north of the dam "which can be used to alleviate pressure on the dam if need be," the coalition said in a letter to Associated Press.

The coalition says the dam has not been structurally damaged, to its knowledge, and says it has not targeted the dam.

The Observatory said there were no evacuations happening from Raqqa, as did the activist-run Raqqa 24 media centre.

Raqqa 24 said engineers employed by the militants had restored power to the dam's gates and the structure was functioning normally.

Reports of residential areas being targeted

The reports from Raqqa came as a leading Syrian opposition group called on the U.S.-led coalition to stop targeting residential areas in and around the city.

The Syrian National Coalition said in a statement that it was "increasingly concerned" about civilian casualties in the campaign against the extremist group. The exiled opposition coalition is taking part in U.N.-mediated talks in Geneva.

The SNC said it believed coalition forces were behind an airstrike that killed at least 30 civilians sheltering in a school in the countryside outside Raqqa on March 21. The coalition has said it is investigating.

The U.S. has provided substantial air and ground support to the Kurdish-led Syrian Democratic Forces, who are closing in on Raqqa as well as the Tabqa Dam.

The Britain-based Syrian Observatory for Human Rights said coalition airstrikes have killed 89 civilians in Raqqa province in the past week, including 35 in a school in the village of Mansoura.