'The house literally collapsed on us': Mosul airstrikes that killed hundreds of civilians condemned

The United Nations and Amnesty International are sounding the alarm over the rising number of Mosul residents killed by coalition and Iraqi forces as the battle to free Iraq's second largest city continues.

U.S.-led coalition has launched an investigation into airstrikes earlier this month 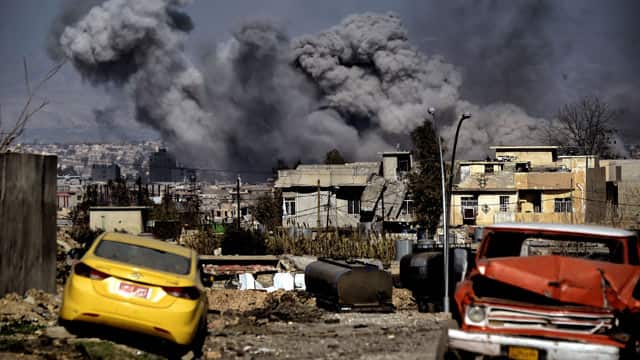 4 years agoVideo
2:22
Many Mosul residents have lost relatives to airstrikes believed to be carried out either by the international coalition fighting ISIS or Iraqi forces 2:22

Standing atop a pile of broken concrete and electrical wires, Fatih Abdullah joined a growing list of Mosul residents who have lost relatives to airstrikes believed to be carried out by the international coalition fighting ISIS or Iraqi forces.

Abdullah's brother Shahab was among 13 people — including children — killed when a strike flattened the family's home in the Hay al-Mamoun district of western Mosul on Feb. 25.

"The day before my brother was killed, he said there is ISIS around my house, so he came to my house," Fatih Abdullah told CBC News. "And then he changed his mind. And the next day, the family was hit by an airstrike."

The international coalition, led by the United States and Iraq's military, faces mounting criticism over the number of civilians being killed in the battle to defeat ISIS in Mosul, which began five months ago.

Civilians placed in danger by ISIS

The top United Nations human rights official, Zeid Ra'ad al-Hussein, said at least 307 civilians have been killed and 273 wounded since Feb. 17, when the military operation to liberate the western side of the city began.

Hussein, the UN High Commissioner for Human Rights, said the self-proclaimed Islamic State in Iraq and Syria has forced residents inside booby-trapped buildings and used women and children as human shields.

"This is an enemy that ruthlessly exploits civilians to serve its own ends, and clearly has not even the faintest qualm about deliberately placing them in danger," Hussein said in a statement.

When a CBC News crew spent more than a week in Mosul earlier this month, the sound of coalition warplanes flying high over the city was common, as was the presence of Iraqi helicopter gunships launching missiles at ISIS targets.

The U.S. military has launched an investigation into strikes that occurred on March 17. Residents of west Mosul say as many as two hundred bodies have been recovered from buildings in one neighbourhood.

Amnesty International accused the international coalition and Iraq's air force of "not taking all the precautions" necessary to protect civilians.

Donatella Rovera, a senior crisis adviser with the rights group, recently spent a week in eastern Mosul, which was freed by Iraqi security forces in January.

'If they were real Muslims, they would not be fighting so close by to civilians.- Fatih Abdullah, Mosul resident

Rovera cited interviews with Mosul residents and medical workers, who told stories of disproportionate fire being used against ISIS militants.

"Perhaps some ISIS fighters were on the roof of a house," she told CBC News. "Instead of using precision munitions to specifically target those fighters, very large bombs were used that destroyed the whole house with the whole family in the house."

Amnesty researchers spoke to Hind Ahmad, a 23-year-old resident of east Mosul, who recalled an explosion on Dec. 16.

"We were sleeping when the house literally collapsed on us. It was a miracle none of us was killed," Amhad told Amnesty. "Almost everyone in the house was killed — 11 people. All I know is that I have lost everyone who was dearest to me."

Iraqi authorities have routinely dropped leaflets over neighbourhoods where the fight with ISIS is about to begin, urging residents to stay in their homes and seek shelter where they can.

Rovera said after residents of western Mosul saw the number of civilians killed in the battle for the east, many chose to take their chances by escaping.

"The reason why we've seen people fleeing west Mosul in much greater numbers may have something to do with the fact that people saw what happened in east Mosul," she said. "Staying put doesn't necessarily keep you safe."

While the international coalition has not responded to the Amnesty claims, the Pentagon maintains that military planners do their best to avoid civilians deaths before a strike is launched.

"There is no military force in the world that has proven more sensitive to civilian casualties," said the U.S. Secretary of Defence James Mattis. "We go out of our way to always do everything humanly possible to reduce the loss of life or injury among innocent people."

While anger toward international and Iraqi forces grows among some Mosul residents, Fatih Abdullah said he does not blame the U.S. for the death of his brother and his family in February.

"I blame ISIS," he said, pointing to a school across the street from the destroyed home, where Abdullah said ISIS fighters had holed up.

"ISIS are not real Muslims. If they were real Muslims they would not be fighting so close by to civilians."