The family of Stephon Clark joined hundreds of protesters at a rally, urging California's capital city not to let his memory or calls for police reform fade nearly two weeks after the 22-year-old unarmed black man was killed by Sacramento officers.

Between 200 and 300 people gather at downtown park, with another protest planned later today

The family of Stephon Clark joined hundreds of protesters at a rally Saturday, urging California's capital city not to let his memory or calls for police reform fade nearly two weeks after the 22-year-old unarmed black man was killed by Sacramento officers.

Clark's fiancée, Salena Manni, stood on stage with his two young sons, grandmother and uncle for the gathering organized by Sacramento native and former NBA player Matt Barnes, who pledged to create a scholarship fund for the children of black men killed by police.

"All he wanted to do was go see his sons again, and unfortunately he can't," Curtis Gordon, Clark's uncle, said as he recalled seeing his nephew hours before the shooting. "So remember that — while we mourn, while we shout, while we cry — because it ain't just our pain, it's their pain."

Barnes amplified calls for charges against the two officers who are on administrative leave.

"It's more than colour — it comes down to right and wrong," he said. "You're trying to tell me I can kill someone and get a paid vacation?"

The peaceful demonstration that drew between 200 and 300 people to a downtown park came a day after a private autopsy released by the family showed Clark was shot from behind.

Clark was killed March 18 by two police officers responding to a call of someone breaking into car windows. They yelled that he had a gun before shooting, but it was only a cellphone. The police department says it has not received an official autopsy report from the county coroner's office.

Activists and faith leaders called for justice not just for Clark, but for all black men killed by police. Family members of Joseph Mann, who was killed by Sacramento police in 2016, also spoke. The chairman of a police oversight commission urged attendees to continue their activism by showing up to meetings and pushing for systemic change.

Community leaders urged the city to set a national example.

Protesters plan to gather Saturday night outside a sheriff's department office in South Sacramento rather than downtown, where thousands of fans will flock for a game between the Sacramento Kings and Golden State Warriors. Protesters have twice blocked fans from entering, but refrained from a similar move at the most recent game.

The Friday release of the private autopsy commissioned by Clark's family has prompted fresh outrage. Pathologist Dr. Bennet Omalu, known for his study of a degenerative brain condition in football players, announced that Clark was hit by eight bullets — six in the back, one in the neck and one in the thigh — and took three to 10 minutes to die. Police waited about five minutes before rendering medical aid.

Omalu said the proposition that Clark was assailing the officers, meaning he was facing them, is "inconsistent with the prevailing forensic evidence." He said it was unclear if Clark would have survived had he gotten immediate medical attention.

A day after the shooting, police distributed a press release that said the officers who shot Clark "saw the suspect facing them, advance forward with his arms extended, and holding an object in his hands." 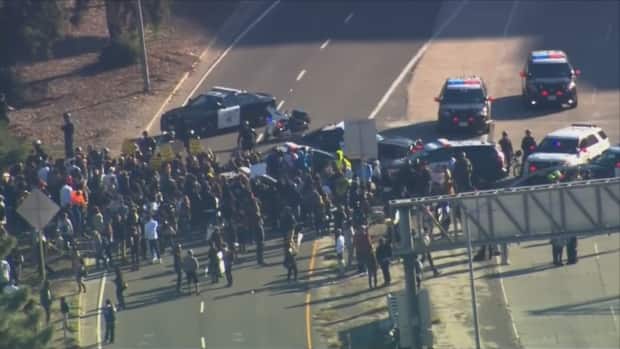 Police video of the shooting doesn't clearly capture all that happened after Clark ran into his grandmother's backyard. Clark initially moved toward the officers, who were peeking out from behind a corner of the house, but it's unclear if he was facing them or knew they were there when they opened fire after shouting "gun, gun, gun."

After 20 shots, officers called to him, apparently believing he might still be alive and armed. They eventually approached and found no gun, just a cellphone.

Gov. Jerry Brown, a Democrat, called Clark's death tragic and said it "raises a number of very serious questions." He said he supports the state attorney general's independent oversight of the investigation.