The imprisonment of a rap artist for his music praising terrorist violence and insulting the Spanish monarchy has set off a powder keg of pent-up rage in the southern European country.

The imprisonment of a rap artist for his music praising terrorist violence and insulting the Spanish monarchy has set off a powder keg of pent-up rage in the southern European country.

The arrest of Pablo Hasél last week has brought thousands to the streets for different reasons.

Under the banner of freedom of expression, many Spaniards strongly object to putting an artist behind bars for his lyrics and tweets. They are clamouring for Spain's left-wing government to fulfil its promise and roll back the Public Security Law passed by the previous conservative administration that was used to prosecute Hasél and other artists.

Hasél's imprisonment to serve a nine-month sentence on Tuesday has also tapped into a well of frustration among Spanish youth, who have the highest unemployment rate in the European Union. Four in every 10 eligible workers under 25 years old are without a job.

"I think that what we are experiencing now with the cases of Pablo Hasél ... and other rappers politically detained by this regime is a brutal attack against the freedom of speech," 26-year-old student Pablo Castilla said during a protest in Barcelona. "The protests are being brutally repressed by the allegedly progressive national government and the Catalan government.

"They are attacking us youngsters because we are showing our anger." 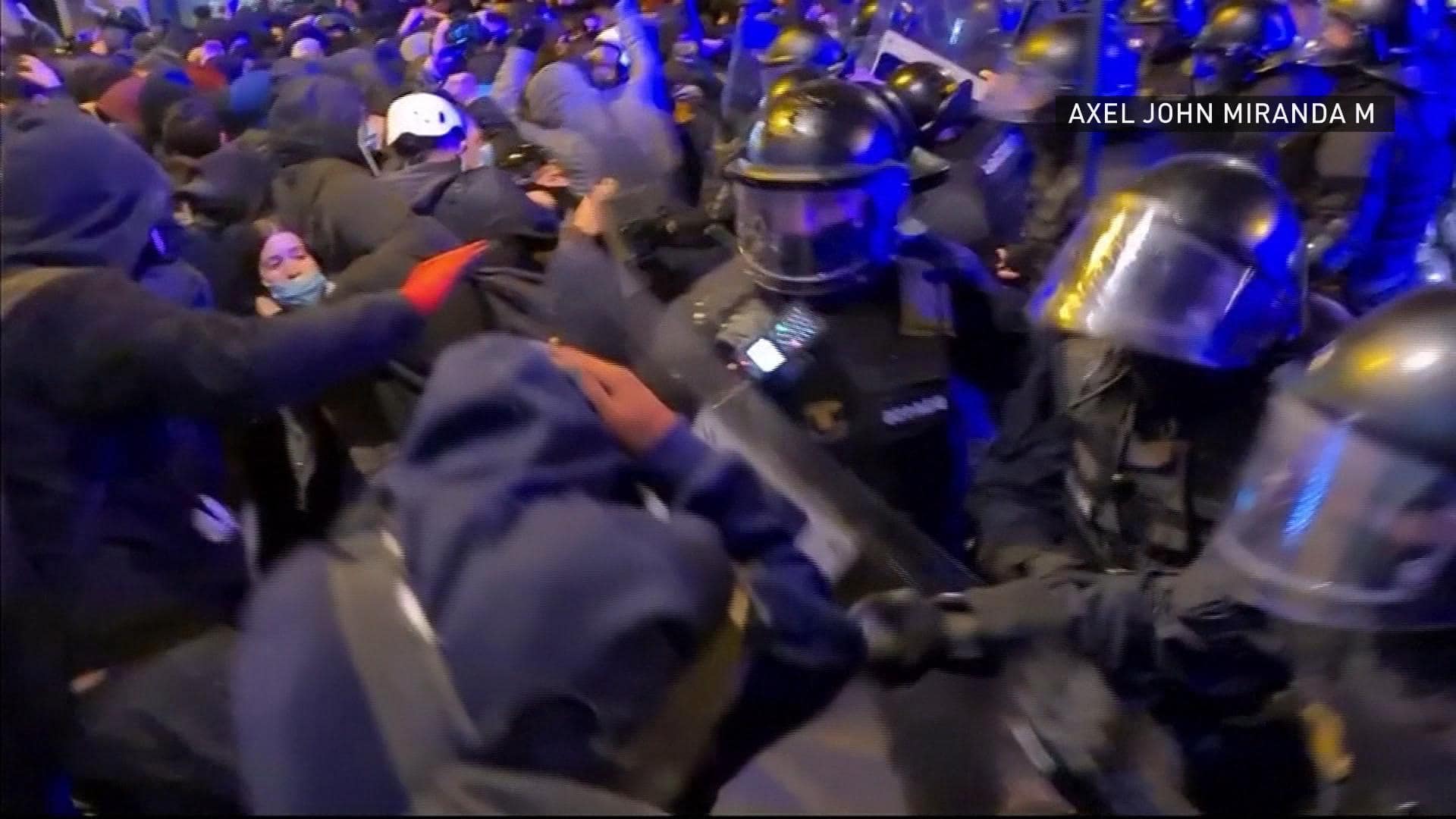 Barcelona sees another night of ugly protests over jailed rapper

13 days ago
2:34
Demonstrations in Barcelona continue after rapper Pablo Hasel was jailed last Tuesday for glorifying terrorism and insulting Spain's royal family. People are angry over the perceived lack of free speech. 2:34

For many, Hasél's case also represents what they perceive as a heavy-handed reaction by a state whose very structure is in need of deep reform.

Hasél's lyrics that strike at King Felipe VI and his father, King Emeritus Juan Carlos I, have connected with a growing public debate on the future of Spain's parliamentary monarchy.

Unquestioned outside fringe circles of the left until the past decade, the royal house has been plagued by financial scandal that has reached Juan Carlos himself. Many Spaniards were aghast when the former monarch left Spain for the United Arab Emirates amid a court investigation into his alleged fiscal improprieties.

As well as shouting its support for Hasél, a crowd that gathered in Madrid on Saturday chanted: "Where is the change? Where is the progress?" and "Juan Carlos de Borbon, womanizer and thief."

The debate has caused tensions inside Spain's left-wing coalition government. While Prime Minister Pedro Sanchez and his Socialist Party back the parliamentary monarchy Spain has had since the end of Francisco Franco's dictatorship in the 1970s, their minor partner, the upstart United We Can party, wants to get rid of the monarchy and has supported the protests for Hasél despite their violent turn.

The anti-monarchic streak in the protests cuts across Spain. But in Hasél's home region of Catalonia, an already tense political climate appears to be magnifying the uproar.

The protests are missing widespread calls for Catalonia's independence or flags supporting secession of the industrial region. Even so, the head of public safety for Barcelona's town hall said that many of the most violent offenders were also heavily involved in the 2019 riots that followed the imprisonment of several leaders of Catalonia's separatist movement.

"It is a varied, violent profile that we already are familiar with because it is very similar to those who played a large role in the incidents of October 2019, so we know the type," Barcelona town council member Albert Batlle told Cadena SER radio.

Some leading pro-secessionist politicians have heavily criticized the handling of the protests by Catalan police, who made more than 35 arrests on Saturday night alone.

What started out as peaceful, if angry, protests by thousands in Barcelona and other nearby towns degenerated into ugly incidents come nightfall caused by a violent minority bent on destroying property and battling with police.

"I think we must differentiate between those who come here in support of Pablo Hasél's freedom and those who do not," 19-year-old Joana Junca said. "Street barricades to defend themselves are OK. But those who go out there just to riot don't have my support."

Within that splinter group of troublemakers, some are out to do some timely looting.

Police point to small groups who bash their way into sporting goods stores and other shops while law enforcement officers are engaged by the clashes and clearing barricades of burning trash containers and metal barriers strewn across streets.

Police described what they called "pillaging" by "some people who take advantage of the disorder and cover provided by the large number of people."

Then there are those, mostly teen rioters, who appear to be motivated by an anarchist, anti-police bent and seek to disrupt public order by any means possible.

They work in fast-moving packs, smashing store windows and trashing bank offices. They pick their moments to stop running and target police with co-ordinated hurling of stones and other objects. Police swing batons and fire foam bullets after pouring out of riot vans to disperse them — and the chase continues.

Eleven police officers were injured on Tuesday night when a mob attacked a police station in the Catalan town of Vic.

"The attack on the station in Vic was a turning point," Imma Viudes, spokesperson of the SAP-Fepol union for the Catalan police, told Spanish National Radio. "We don't have the means to control this mass violence. ... Someone is going to have to put their fist down."

On Sunday, on their way to hurl bottles and firecrackers at a police station in Barcelona, a group of mostly black-clad youths marched behind a banner that they defiantly planted in front of a line of police vans.

It read: "You have taught us that being peaceful is useless.¨