Spain's constitutional court ruled that an independence referendum in Catalonia was unconstitutional, adding weight to government efforts to block the region from breaking away from the rest of the country but not persuading demonstrators demanding the release of two jailed separatist activists.

Spain's constitutional court ruled Tuesday that an independence referendum in Catalonia was unconstitutional, adding weight to government efforts to block the region from breaking away from the rest of the country but not persuading demonstrators demanding the release of two jailed separatist activists.

The court says the law was against national sovereignty and the "indissoluble unity of the Spanish nation."

The constitutional court's ruling was not a surprise. The Spanish government had repeatedly insisted the referendum was illegal. Regional leaders defied the Madrid-based central government and held the Oct. 1 vote even after police seized millions of ballots and used force to close polling stations.

Supporters of secession maintain the "Yes" vote won and Catalan officials have a mandate to declare independence. Portraying the central government as repressive, they showed no signs of giving up despite the court ruling that concluded the referendum was invalid.

Thousands of people holding candles and banners flooded a main avenue in Barcelona on Tuesday night to demand the release of the two Catalan activists jailed by Spanish authorities a day earlier on possible sedition charges for organizing pro-independence rallies ahead of the vote.

"We are facing an executive power in the state that uses the judiciary branch to block the legislative," Catalan government spokesman Jordi Turull told reporters shortly after the constitutional court ruling was announced.

Catalan President Carles Puigdemont made an ambiguous statement about the region's future last week, saying he has the mandate to declare independence but adding that he would not immediately move to implement it in order to allow time for talks with the central government.

Spain has said that no dialogue can take place with independence on the table.

On Monday, a Madrid judge provisionally jailed Jordi Sanchez and Jordi Cuixart, who lead two different grassroots groups promoting independence for Catalonia. The judge ruled they were behind huge demonstrations Sept. 20-21 in Barcelona that hindered the police operation against preparations for the referendum.

Meanwhile, Agusti Alcoberro, the man standing in for Sanchez as head of the Catalan National Assembly, said peaceful protests would be the local response to what he said was the Spanish government's heavy-handed approach.

"No modern state in the 21st century can survive if it bases its legitimacy on subjugating politically and dominating part of its population with the police and military," Alcoberro told The Associated Press. "That is suicidal, and somebody should explain it to the Spanish government." 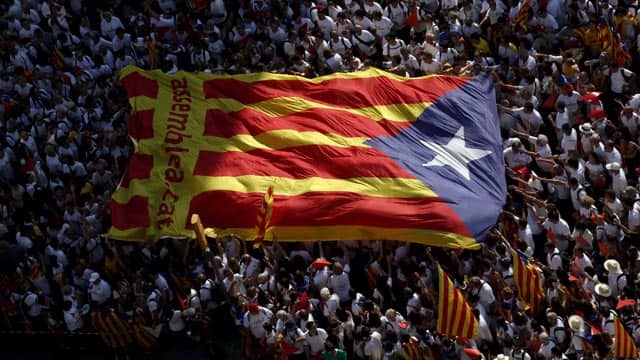 3 years ago
8:09
Independence movements, like the one in Catalonia, are happening all over the world. What drives them and are peaceful solutions possible? Our Turning Point panel weighs in. 8:09
CBC's Journalistic Standards and Practices|About CBC News