Catalonian separatists dismiss Spanish unionists as "fascists," a term that recalls the dictatorship of Francisco Franco. There is seemingly very little movement between the positions.

"The nationalists are the problem," the man wrapped in a Spanish flag said with no hint of irony.  "You have to tell the truth about what's happening here!"

He had just marched through the centre of Barcelona on Sunday along with hundreds of thousands of other flag-waving demonstrators chanting "Catalonia is Spain, Spain is Catalonia."

It was just a week after Catalonia's separatist leaders staged an independence referendum rejected by Spain as illegal and the first major demonstration by Catalonians who favour remaining in Spain.

If the man with the flag is to be believed, that's because up until recently they've been too intimidated by Catalonian separatists to voice their opinions, In other words, by "the nationalists."

He was happy to give his opinion, but not his name. Sharing thoughts on independence can get you into trouble, he said.

Maria Dolores had no such concerns. She too was draped in a Spanish flag. Born in 1957, she said the Catalonian leadership has gone too far.

And she dismissed Catalonia's claim to nationhood, even though she herself was born and raised in Barcelona. "They have created a complete fantasy about their nation," she said. "About their history, about their reality which is not at all the truth."

For their part, many in the separatist camp tend to dismiss unionists as "fascists," an insult dating back to the days of Francisco Franco's dictatorship between 1939 and 1975, a time many pro-independence Catalonians still associate with Madrid, the nation's capital.

They say they're the ones suffering intimidation after the Spanish government sent in thousands of extra national police and the Civil Guard to try to stop the referendum, arresting politicians and confiscating ballot boxes.

So goes the battle for hearts and minds in Catalonia. Two intractable sides with seemingly very little movement between their positions.

"We have two clusters, very homogenous each of them," said Guillem Lopez Casasnovas, an economist and former member of the board of governors of the Bank of Spain, a few days after the unity march.

It was also the night after Catalonian President Carles Puigdemont made his famous suspended declaration of independence — almost an un-declaration.

"Unionist and independentist. They are very homogenous internally, but externally they don't talk to each other." 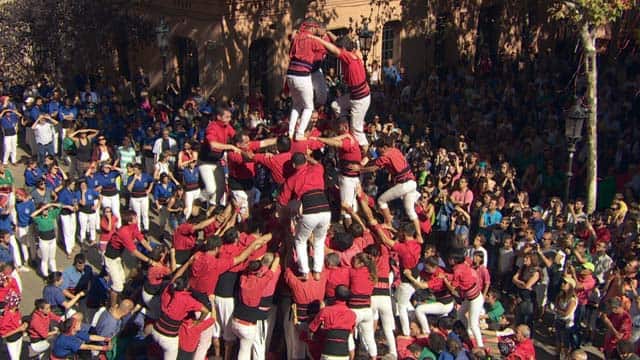 3 years ago
0:46
If the Catalan dream of independence were captured in human form, it might look like this. Making human towers, or “castells," is one of Catalonia's oldest traditions. Here it's performed at a neighbourhood festival in Barcelona. 0:46

One of the oldest Catalonian traditions is the castell, a human tower.

A wide base is formed in a circle, with people standing layered against each other like the leaves of an artichoke: heads down, hands and arms intertwined and supporting the next layer above, pushing up against the backs of their legs. Barefoot climbers pull themselves up ever higher, children eventually scrabbling up the outside to reach the top.

When the last child forms the pinnacle, he or she is supposed to hold up four fingers, each one representing a stripe on the Catalonian flag.

Or so the mythology goes. At a recent Sunday festival in the Barcelona neighbourhood of Sarria the towers were too high for bystanders to get a good look.

The kids only remain up for a second before sliding back down to the ground as if they were going down a fire pole. It's as good a metaphor for nation building and Catalonian determination as you'll find.

The Catalan language and culture were suppressed during the Franco years, along with those from other parts of Spain including the Basque country and Galicia. Even children's names had to be Castilian or Spanish.

That all started to change with the end of the dictatorship, and Catalonia today enjoys a degree of autonomy within Spain. Catalan is taught in schools and has replaced or joined Spanish names on street signs.

But for many Catalonians there remains a deep sense of grievance, the feeling that Madrid still doesn't respect them or see them as equals.

The fact that Catalonians put more into the national coffers than they feel they get back in investment doesn't help.

"Civil servants come from other regions of Spain [to work here] but not knowing Catalan," Nuria Benetez offered as an example. She manages one of the human tower groups taking part in the festival.

"Not knowing anything, so we cannot use Catalan when coming to the justice or sometimes to the health system."

"When you come [to court]  in German you have a translator but when you come in Catalan you're asked to change your language, your mother language, to another one. We should at least have the same rights as foreigners!"

And when the Spanish government refuses to allow Catalonians a vote on their own destiny, it tends to rankle.

"I'm not in favour of one flag or another flag," said Sarria municipal worker Joan Manel. "For me the important thing is that people could vote to decide what they want."

He wants a legal referendum, he says, just like in Scotland or Quebec. The longer people are denied the right to decide, he says, the deeper wounds already festering will become.

"The symptoms are already there. If people see one person wearing a flag, a Spanish flag, maybe they'll be called bad people. And the same the other way.  This is for me dangerous, the beginning of bad things."

The hostility within Catalonian society over the region's future has become more open in the wake of the referendum. The Catalonian president declared victory for independence with 90 per cent in favour, even though the turnout was less than 43 per cent.

In Barcelona, firefighters came out to stand between riot police and voters trying to cast their ballots. When the national police started to get physical with the voters, the firefighters linked arms to form a chain and were beaten for their trouble.

But firefighters have been criticized for taking sides and for wearing their uniforms as civil protection workers.

"Wearing our uniforms is what made people feel comfortable and calm," said Raquel Santiago, a representative of the Catalonian fire brigade, which she said is made up of both pro- and anti- independence members.

Bernat Pratginestos belongs to Firefighters For Independence. His bosses did not want him to talk to us, and he was not allowed to wear his uniform when he did.

It offers a brief glimpse of the potential tug on people's loyalty and sense of duty if Spain were to send in police to take over the administration of Catalonia, as they have threatened to do.

Pratginestos said he doesn't see his support for independence as a conflict on any level because, in his mind, it is protecting democracy.

'It has no sense'

"Once you tell me I cannot vote about that because the Spanish Constitution forbids this, it's kind of telling no, you can only decide about this with war or with a king's marriage or something like that. It has no sense."

He's also convinced that Spain could have won the referendum if it had found a way to let it proceed.

"A bit of fear, a bit of threat, a bit of campaign of the glory of being Spanish and they win the referendum. But in their way to see the conflict, it's not this question. It's the question of who has the right to decide, and they believe that as Catalonians we don't have that right. That we are not a national community."

Many analysts point to a 2010 decision by Spain's Constitutional Court to roll back a statute aimed at offering more autonomy to Catalonia and recognition as a nation as the point at which support for independence really started to grow.

Even those who are against secession say the government in Madrid deserves a high degree of blame for its role in the current crisis.

"The Catalonian government's been talking for five years in favour of independence, and nothing has come from the other side," said Merce Vilarrubias, a Catalonian writer and school teacher.

She has very little sympathy for the separatist cause.

"People like me, we cannot express ourselves because for the separatist the world is divided between them or the fascists. And there is nothing else. So either you are with them or you are a fascist."

Vilarrubias also doesn't like what she describes as the common Catalonian narrative that they are somehow better than the rest of Spain.

"I don't see any reason for independence. I think we can all live together. Catalonia has a high level of self-government and we live in a democracy. We're part of Europe. What more do you want?" she asked.

The day that Puigdemont was due to finally make his statement to the regional assembly on the results of the referendum and what he planned to do with them, people began gathering in the centre of Barcelona early, to watch it broadcast live on big screens.

Hope and exhilaration swirled around in the hot sun, along with the flags flying at the demonstration, the red, yellow and blue of the Catalonian flag this time around.

By the time Puigdemont appeared, the bats were out flying between the palm trees lining the avenue. And as dusk fell, so did the hopes of the most ardent separatists in the crowd as they listened to their president make his declaration of independence and then suspend it.

"We all thought we were going to listen to our president declaring the independence of Catalonia, but we've seen he's not convinced on doing it," said 18-year-old Alex Rodriguez.

"Maybe a week or a month ago, dialogue was the way," said his 17-year-old friend Julia. "But I don't think they want to talk with us. And we are not good with them."

That is perhaps one of the most striking things about the impact of the referendum. The heavy-handed tactics of the Spanish government in trying to respond to the challenge of it, did in fact manage to push some people across those intractable lines, from one cluster to another.

And it has become a part of the narrative for the next generation.