Catalonia's separatist leader wants the regional parliament to debate and vote on how to respond to what he called the Spanish government's "attempt to wipe out" Catalonia's autonomy.

Catalonia's separatist leader wants the regional parliament to debate and vote on how to respond to what he called the Spanish government's "attempt to wipe out" Catalonia's autonomy.

In a televised address late Saturday, Catalan President Carles Puigdemont called plans by Prime Minister Mariano Rajoy to replace him and his Cabinet an "attempt to humiliate" Catalonia and an "attack on democracy."

Puigdemont's comments were a veiled threat to push ahead with an independence declaration for the prosperous region in northeastern Spain. They came after he joined a large protest in Barcelona on Saturday where many were aghast at the plans announced earlier in the day by Rajoy.

Puigdemont called Rajoy's move the "the worst attack" on Catalan people and institutions since Gen. Francisco Franco's abolishment of Catalonia's regional government in 1939.

Hundreds of thousands protested in Barcelona in a massive show of support for independence. They also called for the release of two prominent activists who have been jailed while awaiting possible sedition charges.

The march was initially called by the Catalan National Assembly and Omnium Cultural — two Catalan cultural and advocacy groups — to press for their leaders' release. But it has become a collective rejection of the Spanish government's move to take over Catalonia's regional powers.

Spanish Prime Minister Mariano Rajoy says he wants his country's senate to give him direct power to dissolve the regional Catalan government and call a new election. 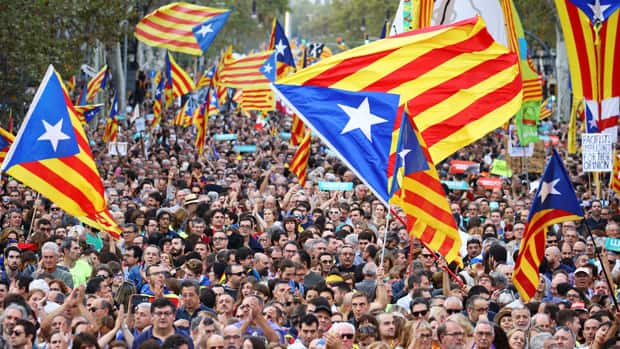 3 years agoVideo
0:52
Thousands gathered in Barcelona Saturday to protest Madrid´s decision to sack the secessionist leadership of Catalonia and force the region into a new election 0:52

Rajoy said after meeting with his cabinet on Saturday that the central government needs to take the unprecedented step of assuming control of Catalonia to "restore order" in the face of a secession effort backed by the regional government.

He is proposing that the powers of Catalan officials be taken over by central government ministers.

The move is aimed at blocking the independence movement that has gained pace since a disputed Oct. 1 referendum on separating Catalonia from Spain.

In the streets of Barcelona, banging pots and pans and honking cars greeted Rajoy's announcement.

Catalan activist groups first called for another protest over the jailing of two pro-independence leaders who are being investigated on possible sedition charges.

The speaker of the Catalan parliament says Spain's central authorities have made an effective "coup d'etat" in what she called an "authoritarian" attempt to take control of the northeastern region.

Legislator Carme Forcadell says in Barcelona that Rajoy "has announced a de facto coup d'etat with the goal of ousting a democratically elected government."

Forcadell said the move is "an authoritarian blow within a member of the European Union."

At the national level, Pablo Echenique, a secretary in the far-left Podemos party, vowed to work to oust Rajoy and his conservative Popular Party.

Pro-business Ciudadanos (Citizens) party president Albert Rivera says he supports the announced measures to heal divisions created by the Catalan independence movement and to provide the security companies need to remain in Catalonia.

Rajoy's cabinet was meeting to outline the scope and timing of the measures the government plans to take under Article 155 of the Spanish constitution. The section allows central authorities to intervene when one of Spain's 17 autonomous regions fails to comply with the law.

It's never been used since the 1978 constitution was adopted, but Rajoy's conservative government says establishing direct control over Catalonia was a move of last resort.

The goal is "the return to legality and the recovery of institutional normalcy," the prime minister said on Friday.

Rajoy could force the removal of Catalan officials and call early regional elections for as soon as January. Such actions are expected to spark angry opposition from supporters of independence and moderate Catalans who will see them as an attack on their autonomy.

The slow-burning constitutional crisis over secession escalated this month when regional government officials claimed the referendum gave them a legal basis for separating from Spain.

The country's constitutional court has so far ruled against all moves toward secession, including the controversial referendum. The court's website appeared to be offline Saturday, and a spokeswoman said it had been affected by vandalism of unknown origin.

Spain's National Security Department had warned of potential digital vandalism Friday and said slogans supporting independence for Catalonia had popped up on a number of government websites.

The constitutional court spokeswoman said Saturday only the court's website was not working and no internal information was compromised. She requested anonymity in line with internal rules.

The referendum vote itself was marred by sporadic violence as police took action to shut down some polling locations. The central government says the results have no legitimacy.