The massive political scandal surrounding South Korea's president has seeped into the lives of young people here, most especially those taking what may be the most important tests of their lives. 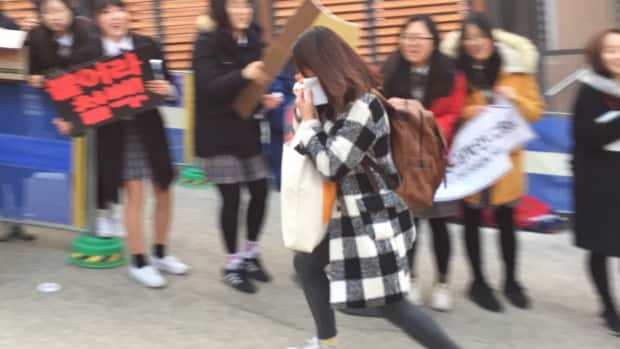 Late for the test

4 years ago
0:26
One of the last arrivals at Seoul Girls High School emerged from the back of an ambulance that arrived with lights flashing and sirens blaring, minutes before the door closed. 0:26

You see it in the recent mass demonstrations, where entire families with young children attend, and students in their blue-and-white school uniforms lead chants in the streets of "Park Geun-hye resign."

The scandal has also affected high school seniors weary of a college entrance exam that may very well define their futures.

On Thursday, about 600,000 of them sat for the Suneung, a standardized test similar to the Scholastic Aptitude Test (SAT) in the United States. Students spend years cramming for the eight-hour exam, which is widely considered the main gateway into South Korea's top universities and workplaces.

In the capital's Mapo district, underclassmen lined the entrance outside of Seoul Girls' High School to cheer on the test-takers.

"I'm nervous right now, but I'll calm down when I take the test," one senior told CBC News as she rushed through the crowd of screaming girls.

So much importance is placed on the Suneung here that the government grounds or reroutes flights during part of the test to limit noise that may distract the students. Businesses open an hour late to ease traffic for students on the road. And parents pray at temples for their children's success, sometimes weeks in advance.

For those who may be running late, the city offers escorts. One of the last arrivals at Seoul Girls' High School emerged from the back of an ambulance which sped up to the school with its lights flashing and sirens blaring.

She shyly ran into the courtyard with her head down, minutes before the door closed.

In a political scandal that has gripped the nation, President Park Geun-hye allegedly allowed her old friend, Choi Soon-sil, to manipulate the government for her own illegal financial gain. Choi has been arrested and charged with extortion, and Park has agreed to an investigation by prosecutors, though the process has been delayed.

Choi also ​may have used the president's clout to get her daughter into Seoul's prestigious Ewha Women's University, despite a spotty academic background.

"That kind of incident should never happen again," said a senior test-taker outside Seoul Girls' High.

"I think Choi's daughter should take a test without any illegal influence and only then return to university."

According to local media, the Choi scandal has diverted attention from the Suneung. Retailers have complained of a fall in the sale of products given as gifts to test-takers, including a popular pumpkin-flavored candy.

And at least one daily newspaper reported students "feel kind of down" because of the discontent in South Korea society now. One parent, it reported, hoped her child would complete the exam before joining protests against the Park administration.

Koreans have long held that education is the ladder to upward mobility. During the Joseon Dynasty it was the civil service examination called the gwageo.

The tradition continues in the form of the Suneung.

"It's a one-time, life-changing opportunity," said Yeom Yoo-sik, a professor of sociology at Yonsei University.

Some people are born with a golden spoon, but that doesn't mean those people should have an advantage. It's unfair.- Student Seo Yong-na

"If your wealth or socio-economic status has changed based on that one-time, life-time educational opportunity, nobody disagrees."

The problem is, he said, not all students get the same shot.

"People have started to observe that's not the reality anymore," said Yeom. "Choi Soon-sil, Lee Jae-yong [the heir to the Samsung empire], they have nothing to do with educational achievement."

The inequality has also emerged in the form of intense private tutoring — day and night. Among the parents who can afford it, some reportedly spend up to 25 per cent of household income to keep their kids in school after school.

The trend has led South Korean students to rank among the best standardized test takers in the world. The trade-off, Yeom said, is that they're also among the unhappiest students in the world.

Seoul Girls' High School juniors are already cramming to prepare for the Suneung next year.

Seo Yong-na will sit for the exam in 2017. She also has her concerns about the test and the Choi scandal.

"Some people are born with a golden spoon, but that doesn't mean those people should have an advantage," she said. "It's unfair."

"As a student who's going to take the test next year, I feel a heavy burden in Korea, because your success depends on which university you attend."

Her senior peers now await their results. But they're also waiting to change their country.

Soon after they finished their Suneung, they formed a candlelight vigil in Gwanghwamun, where hundreds of thousands of people — by some estimates millions — marched last weekend on President Park's official residence, the Blue House.

Photos appeared on numerous Twitter accounts Thursday night. In one, the students hold a banner that reads: "Now it's time for seniors to take action. Suneung is over, resignation begins."