British Prime Minister Theresa May says the ex-spy who was poisoned in Salisbury was made ill by a military-grade nerve agent of the type produced by Russia. 3 years ago
0:21
Theresa May says if Russia doesn't offer a credible response, officials will consider the poisoining an "unlawful use of force by the Russian state against the United Kingdom." 0:21

British Prime Minister Theresa May says the ex-spy who was poisoned in Salisbury was made ill by a military-grade nerve agent of the type produced by Russia.

May said the investigation is ongoing, but her government has concluded that it is "highly likely" that Russia is responsible for the attack on former Russian spy Sergei Skripal and his daughter.

She said there were two possibilities: that it was a "direct act" by the Russian state, or the Russian government lost control of the nerve agent used and allowed it into the hands of others.

May said Russia's ambassador to the U.K. has been summoned to explain how a Russian nerve agent turned up in Salisbury, the English city where Skripal and his adult daughter were sickened.

Skripal, 66, and his daughter Yulia, 33, remain in critical condition following the March 4 nerve agent attack. They were found unconscious on a bench in Salisbury. Skripal lived in the town, 140 kilometres southwest of London.

On Monday, May said British officials had identified the substance as being part of the Novichok group of nerve agents, which were developed by the Soviet military during the 1970s and 1980s.

"Should there be no credible response, we will conclude that this action amounts to an unlawful use of force by the Russian state against the United Kingdom," May said, calling the attack a "reckless and despicable act." 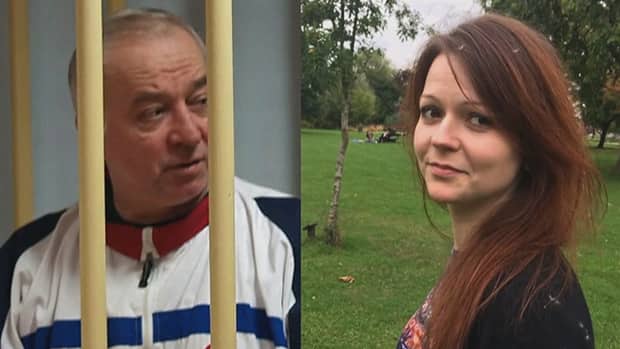 3 years ago
0:28
Theresa May told legislators that Sergei Skripal was exposed to a military-grade nerve agent. 0:28

Her statements to legislators came after she chaired a national security council meeting to hear the latest evidence.

Russia's foreign ministry hit back immediately, saying the comments by May were a "circus show" and part of political information campaign against Russia

Russian President Vladimir Putin said that Britain should figure out what happened to Skripal before blaming the poisoning on Russia. Asked by a British reporter if Russia was behind the poisoning, Putin said in comments carried by Russian news wires on Monday: "You first get to the bottom of things over there, and after that we can discuss it."

Earlier in the day, British legislator Tom Tugendhat told the BBC the poisoning of Skripal and his daughter was "looking awfully like it was state-sponsored attempted murder."

Skripal worked for Russian's military intelligence service GRU before he was recruited to spy for Britain. In 2006, he was sentenced to 13 years in prison in Russia for espionage. He was freed in a 2010 spy swap and settled in England.

The health implications of the attack broadened Sunday after British officials said limited traces of contamination were found in a restaurant and a pub in Salisbury.

Public health officials said the risk of others being sickened by the chemicals that put Skripal and his daughter in hospital was very low. But they advised people who had patronized the businesses during a two-day period to wash their clothes, double-bag articles for dry cleaning, and wipe down items like jewelry.

"It's really important to understand the general public should not be concerned. There is, on the evidence currently, a very low risk." Dr. Jenny Harries of Public Health England said at a news conference.

Authorities haven't revealed how or where the Skripals were exposed to the nerve agent.

In Russia, suspicions over the poisoning point to Britain.

"If you think about it, well, the only ones for whom the poisoning of the ex-GRU colonel is advantageous are the British," Dimtry Kiselev, one of Russia's most powerful media figures, said during his Sunday news program.

The British motive? "Simply in order to feed their Russophobia," Kiselev said.

British Foreign Secretary Boris Johnson has warned that if Russia was behind the poisoning, then Britain would "respond appropriately and robustly."

Johnson also drew parallels between the poisoning of Skripal and the murder of former KGB agent Alexander Litvinenko who died in London in 2006 after drinking green tea laced with radioactive polonium-210.

A British public inquiry found the killing of Litvinenko had probably been approved by Russian President Vladimir Putin and carried out by two Russians, Dmitry Kovtun and Andrei Lugovoy. Lugovoy is a former KGB bodyguard who later became a member of the Russian parliament.