Al-Qaeda detainees also among those executed 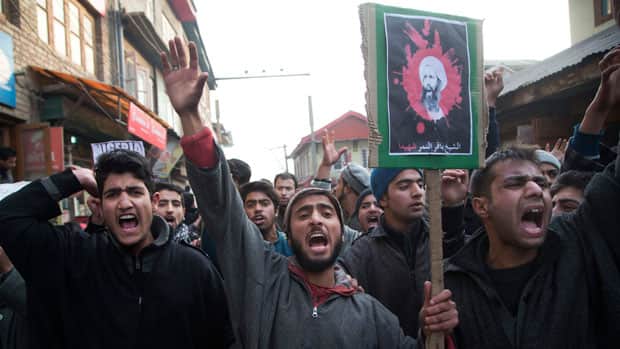 5 years ago
2:34
47 prisoners convicted of terrorism charges were executed on Saturday, including a Shia cleric who rallied protests against the government 2:34

Furious protesters stormed and ransacked Saudi Arabia's embassy on Sunday after gathering to denounce the kingdom for executing a prominent Shia cleric.

Demonstrators broke into the embassy, smashed furniture, lit fires, and threw papers from the roof. They were eventually cleared away by the police, Iran's ISNA news agency reported.

On Saturday, Saudi Arabia announced it had executed 47 prisoners convicted of terrorism charges, including al-Qaeda detainees and Sheikh Nimr al-Nimr who had rallied protests against the government.

The execution of al-Nimr had been expected to heighten sectarian tensions across the region and deepen discontent among Saudi Arabia's Shia minority.

The extremist group's branch in Yemen, known as al-Qaeda in the Arabian Peninsula, threatened violence against Saudi security forces last month if they carried out executions of members of the global network.

Saudi Arabia's top cleric Grand Mufti Sheikh Abdulaziz Al Sheikh said the executions were carried out in line with Islamic law and the need to safeguard the kingdom's security. He described the executions as a "mercy to the prisoners" because it would save them from committing more evil acts and prevent chaos.

Influential Shia figures and groups across the region were swift to condemn al-Nimr's execution, with Saudi Arabia's regional rival Iran describing it as "irresponsible."

Iran's Foreign Ministry spokesman Jaberi Ansari had been quoted on the state-owned English-language Press TV warning that the Saudi monarchy would pay a heavy price for its policies. A senior Iranian cleric, Hossein Nouri Hamedani, said in a statement broadcast on state television that the region should expect "both [Shia] and Sunni Muslims to react."

Brian Stewart, a senior fellow at the Munk School for Global Affairs at the University of Toronto, said Iran has been warning Saudi Arabia "over and over again" not to execute al-Nimr.

"Iran is a defender of the Shia world throughout the Middle East, and this is a direct challenge to Iran at the worst possible time," Stewart said.

"This seems to be a complete defiance of protest over human rights, from Western countries that have asked them not do the executions, and a challenge to Iran," he said.

In Iraq, influential Shia militia Asaib Ahl Al-Haq called on the government to reconsider allowing Saudi Arabia to keep its newly reopened embassy in Baghdad; the Saudi embassy was reopened Friday for the first time in roughly 25 years.

In Lebanon, a top Shia cleric condemned al-Nimr's execution, describing it as "a grave mistake that could have been avoided with a royal amnesty that would have helped reduce sectarian tensions in the region."

This seems to be a complete defiance of protest over human rights- Brian Stewart, Munk School for Global Affairs at the University of Toronto

Small groups of protesters took to the streets in neighbouring Bahrain, which has seen low-level violence since 2011 when the tiny island-nation's Shia majority held mass protests to demand greater rights from the Sunni-led monarchy.

The Interior Ministry announced the names of all 47 people executed in a statement carried by the state-run Saudi Press Agency. Of those executed, 45 were Saudi citizens, one was from Chad and another was from Egypt.

The al-Qaeda militants executed, including leading idealogue Faris al-Shuwail, had been convicted of taking part in a wave of deadly attacks that killed foreigners and Saudis.

The executions took place in the capital, Riyadh, and 12 other cities and towns, the Interior Ministry statement said. Nearly all executions carried out in Saudi Arabia are by beheading with a sword.

Saudi Arabia carried out at least 157 executions in 2015, with beheadings reaching their highest level in the kingdom in two decades, according to several advocacy groups that monitor the death penalty worldwide.