The first aid delivery in weeks to reach the besieged eastern suburbs of Damascus was cut short after Syrian government forces began shelling the area while aid workers were still inside, a local council says, amid a renewed escalation in the government's deadly aerial and ground campaign.

The first aid delivery in weeks to reach the besieged eastern suburbs of Damascus was cut short after Syrian government forces began shelling the area while aid workers were still inside, a local council said Tuesday amid renewed escalation in the government's deadly aerial and ground campaign.

Aid trucks had to leave before they could finish unloading supplies on Monday, as the eastern Ghouta suburbs suffered their worst day of violence since the UN Security Council demanded a 30-day ceasefire for Syria.

The Syrian American Medical Society charity, which supports hospitals in eastern Ghouta, said 79 people were killed in shelling and airstrikes, as the government, supported by Russia's military, pushed its assault on the rebel-held suburbs, where the UN estimates close to 400,000 people are trapped under unmanageable levels of violence.

The U.K.-based Syrian Observatory for Human Rights monitoring group said 80 civilians were killed on Monday. The Security Council resolution, which passed unanimously on Feb. 25, has gone unheeded. Monday's aid shipment was the first to enter eastern Ghouta amid weeks of a crippling siege and a government assault that has killed close to 800 civilians since Feb. 18.

Aid agencies, however, said Syrian authorities removed basic health supplies, including trauma, surgical kits and insulin, from the convoys before they set off. 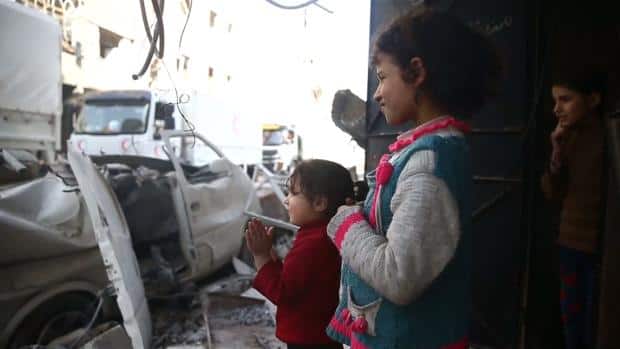 The UN said airstrikes and shelling in eastern Ghouta and the shelling of Damascus continued for hours while the convoy was unloading supplies.

"After nearly nine hours inside, the decision was made to leave for security reasons and to avoid jeopardizing the safety of humanitarian teams on the ground," said Jens Laerke, deputy spokesperson for the UN's Office for the Co-ordination of Humanitarian Affairs. As a result, 14 of the 46 trucks in the convoy were not able to fully offload critical humanitarian supplies. Of the 14, four were partially offloaded, he said.

Laerke said the team found a desperate situation for people who have endured months without access to humanitarian aid.

"Food for civilians was in short supply or prohibitively expensive and high rates of acute malnutrition were observed," he said.

The violence called into question future aid deliveries. Another aid convoy is scheduled to enter eastern Ghouta on Thursday, but Laerke said security measures must be guaranteed for this to happen.

The International Committee for the Red Cross confirmed that its joint convoy with the United Nations had to leave before offloading all its supplies on account of the deteriorating security situation.

Ingy Sedky, the ICRC spokesperson in Syria, said most of the aid from a 46-truck convoy was delivered to the town of Douma in eastern Ghouta but the mission was cut short before the rest of the supplies could be unloaded.

Iyad Abdelaziz, a member of the Douma Local Council, said nine aid trucks had to leave the area after government shelling and airstrikes intensified in the evening.

The group, also known as the White Helmets, added that two of its volunteers, and 28 others, suffered difficulties breathing following shelling on the town of Hammouriyeh on Monday evening. It accused the government of using "poison gas." The Syrian Observatory for Human Rights reported 18 people suffered breathing difficulties, without attributing a cause.

It was the eighth allegation of chlorine gas use reported by the Syrian American Medical Society this year. The reports could not be independently confirmed, and Russia used its Security Council veto to freeze the work of a UN body investigating such reports earlier this year.

Still, the allegations could provoke a response from Washington, which says it could take military action against the Syrian government for continued chemical weapons use against its own people.

The convoy that reached Douma on Monday carried only a fraction of the relief needed for the estimated 400,000 people trapped under the government's siege. The UN's humanitarian office said the convoy carried food for 27,500 people.

But it said the Syrian government offloaded 70 per cent of the health supplies, including trauma and surgical kits and insulin, before allowing the convoy to enter eastern Ghouta.

The government routinely removes lifesaving medical supplies from aid convoys, in a pattern of denying such aid to civilians living in opposition areas. UN officials have complained for years about such actions by the Syrian government.

Russia's Defence Ministry said it was extending an offer to allow armed rebels to leave eastern Ghouta with their families and weapons. Russia has been a staunch ally of Syrian President Bashar al-Assad, helping him turn the tide of the bloody civil war in his favour.

Ministry spokesperson Hami Aksoy said on Tuesday that the camps would be built in a zone controlled by Turkish-backed forces, as well as in Idlib province where Turkish forces are trying to establish a "de-escalation zone" under an agreement reached between Turkey, Russia and Iran.

Turkey controls a swath of territory revolving around the town of al-Rai, al-Bab and Jarablus — a border zone that Turkey and Turkey-backed rebels took from ISIS in 2016.

Turkey has also launched a campaign to oust a Syrian Kurdish militia from the enclave of Afrin that Ankara considers to be "terrorist" and linked to an insurgency within Turkey's own borders.