Calling it a "groundbreaking, historic moment," committee chair Lindsey Graham led the 22-member committee's approval with unified support among its 12 Republican members, even with the Democrats vowing to stay away.

Committee approval would pave the way for a final confirmation vote on the Senate floor planned by Republican Majority Leader Mitch McConnell for Monday.

The confirmation of Barrett, a federal appeals court judge, would expand the top U.S. judicial body's conservative majority to 6-3 if approved by the full chamber.

"We're not going to allow them to take over the committee," Graham said Thursday of the Democrats.

My Democratic Senate colleagues and I boycotted the Supreme Court nominee committee vote today. Let's be clear: this nomination process is a sham and shows how Republicans will stop at nothing to strip health care from millions of Americans with pre-existing conditions.

Texas Republican John Cornyn called it a "surreal environment," given the Democratic no-show.

Protesters, some shouting "Stop the confirmation!" demonstrated loudly outside the Capitol across the street from the Supreme Court. Some demonstrators were dressed as handmaids, evoking The Handmaid's Tale and a reference to Barrett's role in a conservative religious group that once called high-ranking women members "handmaids." Other demonstrators had "#SupportAmy" signs.

The protesters drowned out Democratic senators who called a news conference to decry what they called a "sham" confirmation process.

Senate Democratic leader Chuck Schumer said the Senate Republican majority "is conducting the most rushed, most partisan and the least legitimate nomination to the Supreme Court in our nation's history."

"Democrats will not lend a single ounce of legitimacy to this sham vote," he said.

Because of the boycott, Republicans on the panel adjusted rules that require at least two members of the minority party to be present to constitute a quorum. 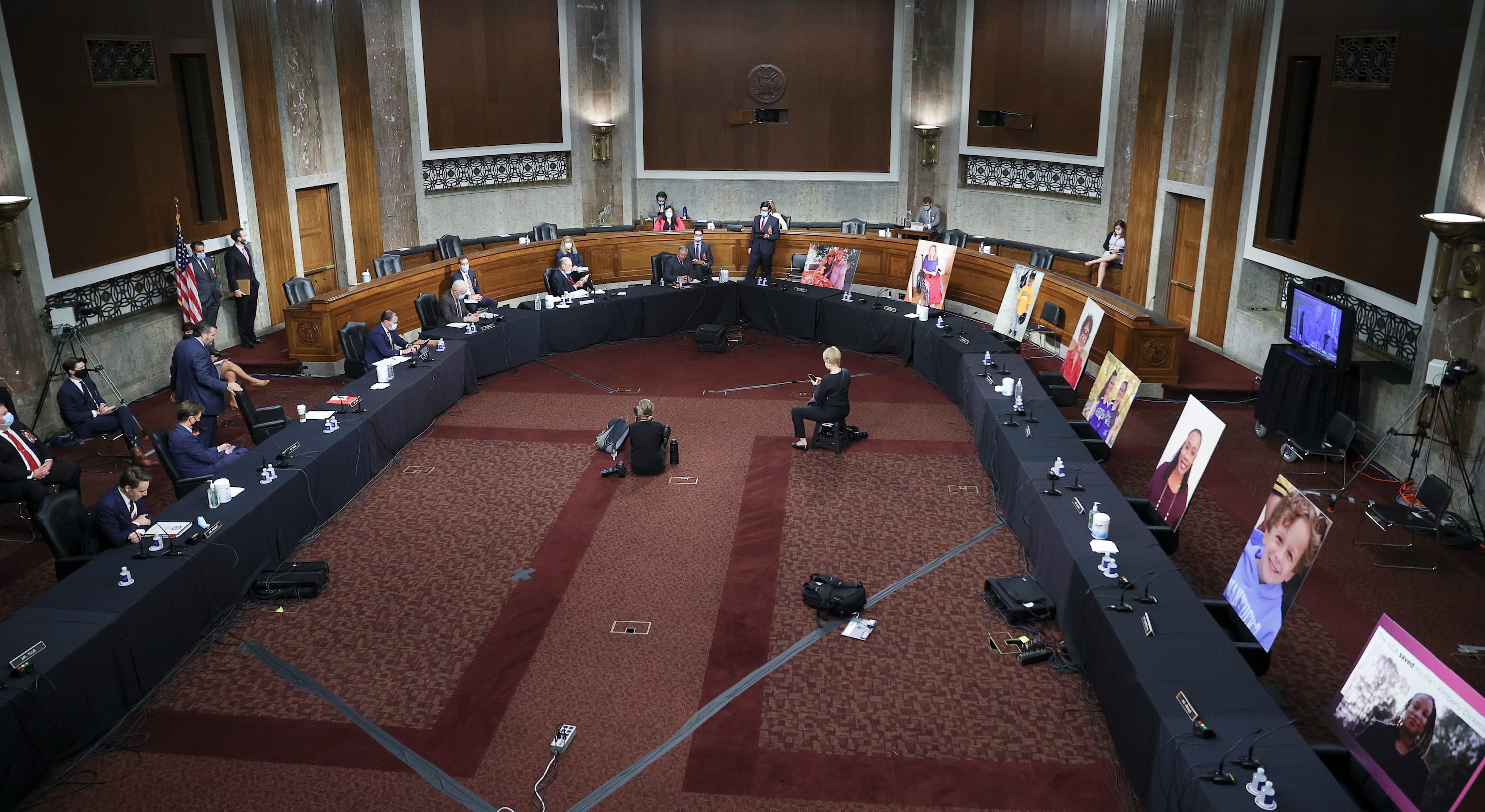 3 months agoVideo
1:40
U.S. Senate judiciary committee chair Lindsey Graham said the committee vote is a 'historic moment' for American politics, in contrast to Senate minority leader Chuck Schumer, who said the nomination of Amy Coney Barrett is the most 'illegitimate' process he has seen. 1:40

Mike Davis, a former top aide on the panel who now advises Senate Republicans, said the committee was well within its normal practice to hold the vote, even with Democrats skipping it. He said the longstanding practice has been to allow business to go forward if all members of the majority attend.

Countering that view, a Democratic aide granted anonymity to discuss the proceedings said never before have the rules been brushed past for a Supreme Court confirmation.

Barrett would be the fifth woman on the top court but given her past record, by far the most conservative.

Sandra Day O'Connor, the first, was seen as a moderate conservative, while the three subsequent female justices have been liberal.

Seats that would have been occupied by Senate Democrats were filled Thursday with blown-up placards of American citizens the party says will be stripped of Obamacare coverage if the top court rules after a hearing to be held soon after the election to void aspects of what is known as the Affordable Care Health Act.

It is no surprise Democrats are boycotting today’s <a href="https://twitter.com/senjudiciary?ref_src=twsrc%5Etfw">@senjudiciary</a> business meeting. They know Amy Coney Barrett is well-qualified to serve on the Supreme Court. That’s why their actions today are merely a political stunt to appease the angry, radical Left. <a href="https://twitter.com/hashtag/ConfirmACB?src=hash&amp;ref_src=twsrc%5Etfw">#ConfirmACB</a>

The 48-year-old Barrett is a devout Catholic who personally opposes abortion. Barrett told the committee last week that she believed the landmark 1973 Roe v. Wade ruling legalizing abortion nationwide was not a "super-precedent" that could never potentially be overturned. Barrett also said she had "no agenda" to roll back abortion rights.

Trump said in 2016 he would appoint justices who would overturn Roe. Senate Republicans, who have made confirmation of Trump's conservative judicial appointees a high priority, have pulled out all the stops to ensure that the chamber can confirm Barrett to the post before the election on Nov. 3, as the president has requested.

Senate approval all but guaranteed

Republicans hold a 53-47 Senate majority, making her confirmation a virtual certainty. Trump has said he believes the Supreme Court will decide the election's outcome and has made clear that he wants Barrett on the bench for any election-related cases.

Democrats pressed her to recuse herself from such cases because of a conflict of interest in potentially deciding the political fate of the president who nominated her so close to the election. She rebuffed their pleas.

What do you want to know about the U.S. election? Email us at Ask@cbc.ca

No nominee to the Supreme Court has ever been confirmed by the Senate this close to a presidential election. Democrats were incensed that Senate Republicans moved forward with the nomination so near an election after refusing in 2016 to allow the chamber to act on a Supreme Court nomination by Trump's Democratic predecessor, Barack Obama, because it was an election year.

WATCH l Barrett on what it means to succeed Ginsburg:

3 months agoVideo
2:35
Republican Senator Joni Ernst asks U.S. Supreme Court nominee Amy Coney Barrett how she would respond to people who say she is not an adequate replacement for the late liberal Justice Ruth Bader Ginsburg. 2:35

Some on the left have floated the idea of expanding the number of justices if Biden wins to counter the court's rightward drift in light of the actions of Senate Republicans in 2016 and now. Republicans have decried the idea as "court-packing."

Biden said last week he was "not a fan" of court-packing but has kept his options open. The number of justices has been fixed by law at nine for more than a century.

Trump appointed Barrett to the Chicago-based 7th U.S. Circuit Court of Appeals in 2017. If confirmed, Barrett could serve on the Supreme Court for decades, alongside Trump's two other appointees, Neil Gorsuch and Brett Kavanaugh.