President Donald Trump's U.S. Supreme Court nominee Amy Coney Barrett said Wednesday during the the third day of her four-day Senate judiciary committee hearing that she cannot express a view on climate change because it is a "very contentious matter of public policy."

Supreme Court nominee Amy Coney Barrett says she cannot express a view on climate change because it is a "very contentious matter of public policy."

Barrett made the comment Wednesday, the third day of her four-day Senate judiciary committee hearing, during a line of questioning from Democratic Sen. Kamala Harris.

Asked whether "climate change is happening and it's threatening the air we breathe and the water we drink," Barrett declined to answer, saying that it is "a very contentious matter of public debate, and I will not do that, I will not express a view on a matter of public policy, especially one that is politically controversial."

Barrett also said it is an "open question" whether Trump could pardon himself if he were convicted of a crime, while adding that the nation's top judicial body "can't control" whether a president obeys its decisions.

Trump has said he has the "absolute power" to pardon himself, part of his executive clemency authority. Asked by Democratic Senator Patrick Leahy whether a president has such power, Barrett said the "question has never been litigated."

"That question may or may not arise, but it's one that calls for legal analysis of what the scope of the pardon power is. So because it would be opining on an open question when I haven't gone through the judicial process to decide it, it's not one on which I can offer a view," Barrett said.

'No one is above the law'

Trump faces a criminal investigation about his conduct and the conduct of his businesses by a New York City prosecutor who is seeking his financial records and tax returns. Trump also has issued executive clemency to political allies and friends.

Barrett, a conservative federal appellate judge, is the Republican president's third selection for a lifetime job on the Supreme Court. Trump has asked the Senate, controlled by his fellow Republicans, to confirm her before the Nov. 3 U.S. election.

Barrett said "no one is above the law" but twice declined to answer directly when Leahy asked her whether a president who refuses to comply with a court order is a threat to the U.S. constitutional system of checks and balances within the three branches of government.

"The Supreme Court can't control whether or not the president obeys," she said.

Barrett declined to discuss whether Trump is violating the U.S. Constitution's "emoluments" clause with his business dealings, objecting to Leahy's characterization of the provision as an anti-corruption measure. The provision bars presidents from taking gifts or payments from foreign and state governments without congressional approval.

"I don't know if I would characterize it as an anti-corruption clause," Barrett said, adding that it was designed to "prevent foreign countries from having influence."

Barrett, 48, would be the fifth woman ever to serve on the court. As a devout Catholic, Barrett personally opposes abortion and has sidestepped questions on contentious social issues, including abortion.

"This is history being made folks," Sen. Lindsey Graham, the chairman of the panel, said. "This is the first time in American history that we've nominated a woman who is unashamedly pro-life and embraces her faith without apology, and she's going to the court. A seat at the table is waiting for you."

Under questioning by Graham, Barrett reiterated her comments from Tuesday that the landmark 1973 Roe vs. Wade ruling that recognized a woman's constitutional right to abortion was not a "super-precedent" that could never potentially be overturned.

She would not say if the landmark 1965 Griswold vs. Connecticut ruling that protects the right of married couples to use contraceptives without government restrictions was properly decided, but said it is "very unlikely" to be imperiled.

Some conservatives, including Barrett's mentor, the late Antonin Scalia, have criticized the ruling, which recognized a right to constitutional privacy and paved the way for Roe vs. Wade and rulings recognizing LGBT rights.

WATCH | Barrett pressed on why she won't answer questions about certain cases: 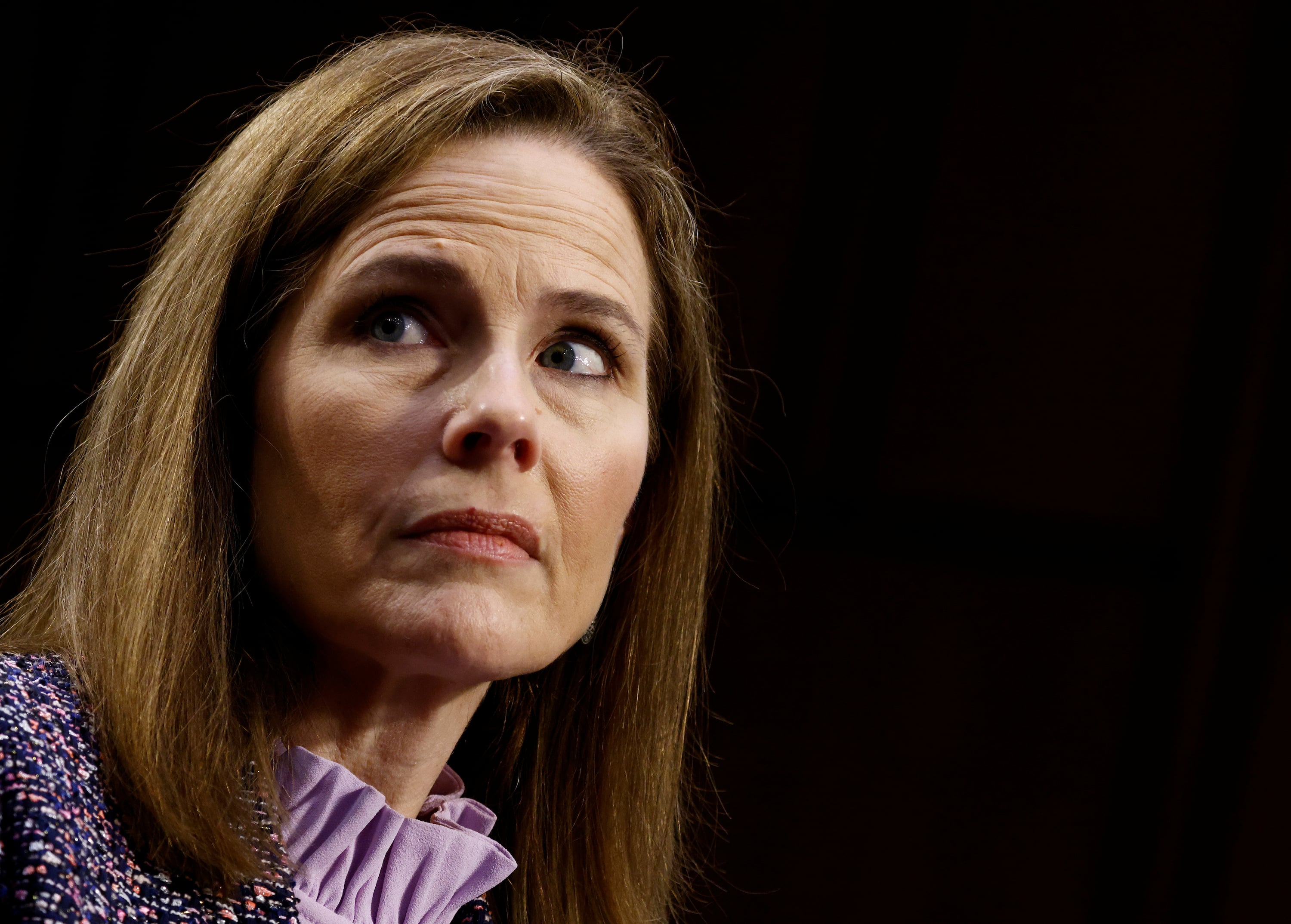 3 months agoVideo
3:42
Amy Coney Barrett is pressed on why she will not say whether a case the decriminalization of gay relationships was correctly decided. 3:42

Barrett could be on the high court for Nov. 10 arguments in a challenge by Trump and Republican-led states to Obamacare, the 2010 law, formally called the Affordable Care Act (ACA), that has helped millions of Americans obtain medical coverage and includes protections for people with pre-existing conditions.

In response to Democratic suggestions that she would vote to strike down the entire law if one part is found to be unlawful, Barrett said that if a statute can be saved, it is a judge's duty to do so.

Barrett indicated she favours a broad reading of the "severability doctrine," in which courts assume that when one provision of a law is unlawful, Congress would want the rest of the statute to remain in place. The Supreme Court has taken such an approach in recent years.

"I think insofar as it tries to effectuate what Congress would have wanted, it's the court and Congress working hand in hand," Barrett said of the doctrine.

When judges address the legal question raised in the ACA case, the "presumption" is that Congress did not intend the whole statute to fall, Barrett said.

"If I were on the court, and if a case involving the ACA came before me, I would approach it with an open mind," Barrett told Republican Sen. John Cornyn of Texas.

Barrett has declined to say whether she would recuse herself from the Obamacare case. Barrett said the case centres on a different legal issue than two previous Supreme Court rulings that upheld Obamacare that she has criticized.

Trump nominated Barrett to a lifetime post on the court on Sept. 26 to replace the late liberal Justice Ruth Bader Ginsburg. At one point Wednesday, Barrett was asked to respond to those who believe she would be the wrong person to fill that seat.

WATCH | Barrett on why she believes she can fill seat left vacant by Ruth Bader Ginsberg:

3 months agoVideo
2:35
Republican Senator Joni Ernst asks U.S. Supreme Court nominee Amy Coney Barrett how she would respond to people who say she is not an adequate replacement for the late liberal Justice Ruth Bader Ginsburg. 2:35

"I am fully committed to enforcing all laws to prohibit racial discrimination," Barrett said.

"In my private life, I abhor racial discrimination and obviously for both personal reasons and professional reasons, I want to ensure that there's equal justice for all," said Barrett, who has two Black adopted children from Haiti among her seven kids. 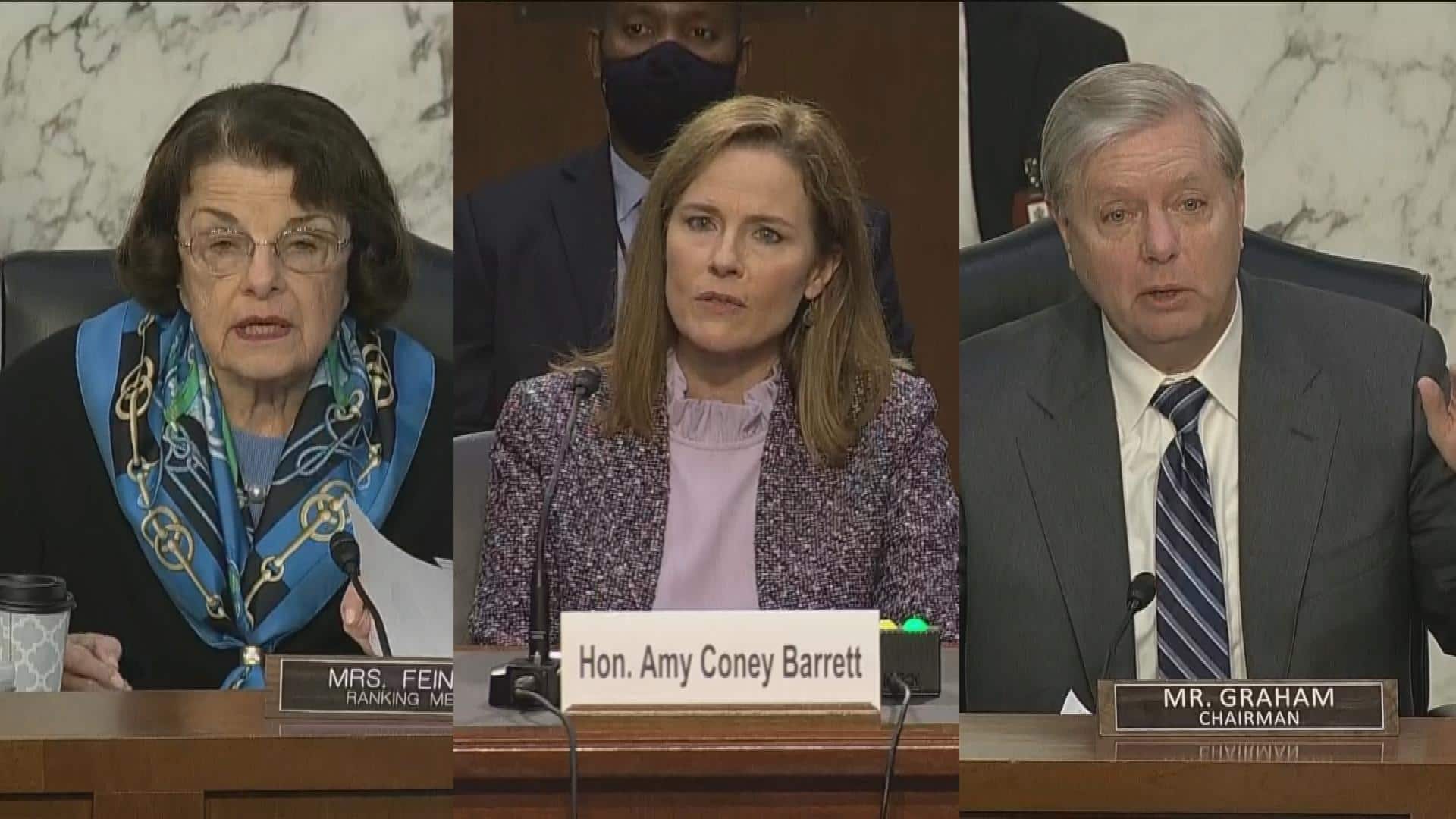 Barrett would tilt the court even further to the right, giving conservative justices a 6-3 majority. Republicans have a 53-47 Senate majority, making Barrett's confirmation a virtual certainty.

Trump has urged the Senate, controlled by his fellow Republicans, to confirm Barrett before Election Day. The president has said he expects the U.S. Supreme Court to decide the election's outcome as he faces Democratic challenger Joe Biden.

The hearing is scheduled to end on Thursday with testimony from outside witnesses, with Republicans then preparing for a committee vote on her nomination.