Cable networks are bemoaning the loss of civility in public life after Sarah Huckabee Sanders was asked to leave a restaurant. But the way the incident has been used is all about politics.

Even supposing civility in America's public life is dead, it did not die because Sarah Huckabee Sanders was asked to leave the Red Hen restaurant in Lexington, Virginia, Friday night.

In case you missed the tale, Sanders, the White House press secretary, was at the restaurant for dinner with friends when the owner, Stephanie Wilkinson, pulled her aside and asked her to leave.

"I explained that the restaurant has certain standards that I feel it has to uphold, such as honesty, and compassion and cooperation," Wilkinson told the Washington Post.

Wilkinson made it clear in the Post story that her problem with Sanders is not that Sanders supports the president, but that Sanders is an actual tool of the Trump administration, which Wilkinson believes has enacted policies that are cruel and inhumane.

"I said, 'I'd like to ask you to leave,'" Wilkinson says she told Sanders.

According to Wilkinson, Sanders replied "That's fine, I'll go." The restaurant picked up the cheque.

There was no fuss, no muss, no scene — until the story broke.

​
On Saturday morning Sanders used her White House Twitter account to tweet about the incident and to say that Wilkinson's actions "say more about her than about me," which seems like it could be true no matter whose side you're on.

Last night I was told by the owner of Red Hen in Lexington, VA to leave because I work for <a href="https://twitter.com/POTUS?ref_src=twsrc%5Etfw">@POTUS</a> and I politely left. Her actions say far more about her than about me. I always do my best to treat people, including those I disagree with, respectfully and will continue to do so

Later Sanders explained that she used her White House Twitter account because reporters were asking about the incident, and so that made it official business.

Soon Trump supporters were trolling the restaurant, encouraging fake phone dinner reservations, while Trump haters were in a swoon over their new hero Wilkinson.

By Monday the president was attacking the Red Hen on Twitter and even suggested it might not be a healthy place to eat. He claimed it had dirty windows, doors and canopies  and said "I always had a rule, if a restaurant is dirty on the outside, it is dirty on the inside!"

The Red Hen Restaurant should focus more on cleaning its filthy canopies, doors and windows (badly needs a paint job) rather than refusing to serve a fine person like Sarah Huckabee Sanders. I always had a rule, if a restaurant is dirty on the outside, it is dirty on the inside!

In a different time such an attack by the president on a privately owned, legally operated American business might be considered an abuse of office.

Let them 'eat in peace'

In any case the Washington Post editorialized in Sanders's defence. "Let the Trump Team Eat in Peace," it argued, warning that those who think this is a "special moment" that justifies incivility should consider how others might follow that lead on issues such as abortion.

The Post editorial triggered its own reaction from the left, many of whom accused it of failing to understand the overall enormity of the Trump moment and of effectively recommending a butter knife to engage in a long and ongoing gunfight.

In a lengthy thread on Twitter, progressive website Vox's David Roberts argued that Wilkinson "was trying to draw a line, disrupt the normal daily patterns of civility & accommodation, create a Moment around which people can rally to echo the message: No. This is not normal, not 'just politics.' We must stop pretending it is; we must snap out of the hypnosis."

He mocked what he called "Very Serious People," such as the Post's editorialists, who say "Calm Down. Let's not go crazy here. Let's not be RUDE" in the context of children being separated from parents.

David Axelrod,  former strategist and senior adviser to President Obama, took exactly the opposite view and said he was both "amazed and appalled by the number of folks on the left who applauded the expulsion of @PressSec and her family from a restaurant." A triumph for Donald Trump, he called it.

It was the cable news networks that bemoaned the sudden death of civility, as if America has not been wringing its hands about that for years.

Representative Joe Wilson bellowed "You lie!" at Barack Obama during a speech to Congress in 2009 — or, if you like, go back more than a century to when gauche taunts of "Ma! Ma! Where is Pa? Gone to the White House Ha! Ha! Ha!" followed Grover Cleveland after allegations that he'd fathered an illegitimate child. That was in 1884.

Roberts and Axelrod disagree about the wisdom of what happened at the Red Hen, but they agree it's not about civility, it's about tactics and strategy. That makes it similar to the dilemma Democrats face in calculating how much to play the president in the midterm election campaigns, to go hard against him or talk more positively about a different kind of politics.

The president seems to welcome the attack, to see it as a chance to reprise one of his favourite roles: victim.

He reportedly instructed Sanders to begin her press briefing with a statement about the incident, and she did.

Standing at her podium Monday, she looked down at the reporters with a feeling that she had the high ground. 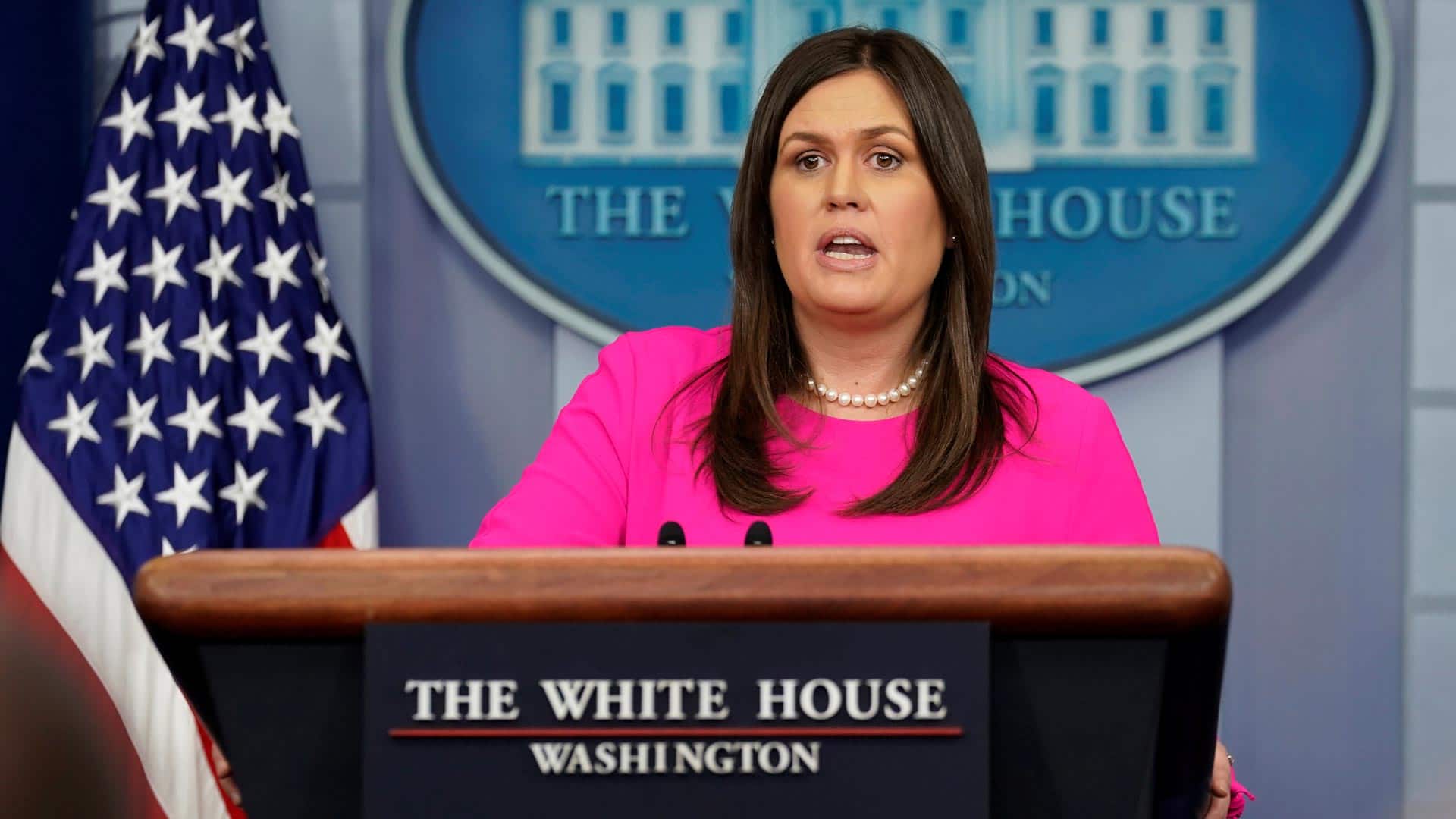 Sarah Sanders on being asked to leave restaurant

"Healthy debate on political ideas and philosophy is important," she said. "But the calls for harassment and push for any Trump supporter to avoid the public is unacceptable."

Her defence of civility came just a couple of hours after her boss described Congresswoman Maxine Waters as "an extraordinarily low IQ person" after she called on opponents of the family separation policy to "create a crowd" when encountering members of Trump's cabinet in public and let them know "they're not welcome anymore, anywhere."