St. Nick's annual trip with a reindeer-led sleigh loaded with presents is well in flight, with the goal of delivering them to children around the world in time for Christmas. So put down that mug of hot cocoa and those cookies, and follow Santa's journey here. 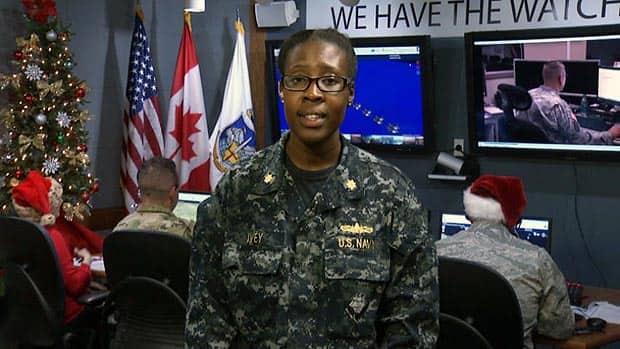 Santa Claus is on his way!

The jolly old soul in the red suit is making the annual reindeer-drawn sleigh ride to deliver presents to children around the world — and he's already stopped on several continents.

Santa started his global flight around 6 a.m. ET Thursday and made his first stop in the village of Novoye Chaplino in far northeastern Russia.

By 10:00 p.m. ET, Santa had dropped off almost 5 billion presents and was on his way to Haiti, having recently passed parts of Canada. His sleigh had carried gifts for children in eastern Europe, northern Africa, India, the Middle East, Australia, Japan and New Zealand.

When Santa approached Canadian airspace from the northeast, NORAD said he was joined by his escort — two CF-18 Hornets from CFB Bagotville in Quebec. They stayed with him until he approached Winnipeg, where two fighter jets from 4 Wing Cold Lake in Alberta took over for the rest of his trip across Canada, before handing off to American fighter jets.

Shortly after, the U.S. Department of Agriculture has granted a first-of-its kind Christmas Eve waiver for Santa and his herd of reindeer to enter the United States, bypassing the agency's usually stringent requirements on the importation of livestock.

The agency said in a statement issued on Thursday it was allowing "S. Claus of the North Pole, broker of Worldwide Gifts," to skip routine disease-transmission screening for live animals entering the United States, noting that a recent inspection had deemed his hooved team a "negligible risk."

Santa's journey was also being tracked by the Google Santa Tracker, but this service was showing him approaching the pyramids in Egypt at 4 p.m. ET, an hour after Norad showed him flying over the country.

Santa will be on the go until he makes his final stop at Midway Atoll in the Pacific Ocean early Christmas Day. After making his last deliveries, he will head home to the North Pole for some well-deserved rest — before starting preparations for next Christmas.