The Republican presidential nominee said that the 30,000 missing emails from Clinton's private email server would reveal "some beauties" and made an extraordinary plea for a foreign power to locate them.

'Russia, if you're listening, I hope you're able to find the 30,000 emails that are missing' 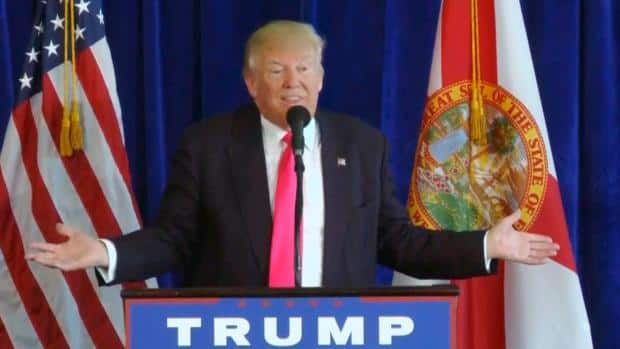 4 years ago
2:06
Republican candidate says Russian president will respect him 2:06

In a Miami press conference Wednesday, the Republican presidential nominee said that the 30,000 missing emails from Clinton's private email server would reveal "some beauties" and made an extraordinary plea for a foreign power to locate them.

"Russia, if you're listening, I hope you're able to find the 30,000 emails that are missing," Trump said. "I think you'll be rewarded mightily by our press!"

Clinton's campaign claims that Russia hacked computers belonging to the Democratic National Committee and released those emails on the eve of the party's convention to benefit Trump's candidacy.

The emails, published by WikiLeaks last week, revealed that the DNC favoured Clinton's candidacy over rival Bernie Sanders, triggering a leadership shakeup within the DNC.

Trump dismissed the claims, saying it's not clear who hacked those emails, but the incident is a sign that foreign countries no longer respect the U.S.

"If it's any foreign country it shows how little respect they have for the United States," said Trump, who added that he was "not an email person myself because I believe it can be hacked."

Moments after he took the final question, Pence condemned the possible cyber-espionage, breaking from Trump for the first time since being selected as his vice-president.

"If it is Russia and they are interfering in our elections, I can assure you both parties and the United States government will ensure there are serious consequences," Pence said in a statement.

Trump, whom Democrats have accused of having cozy ties with Russian President Vladimir Putin, repeatedly declined to condemn the actions of Russia or any other foreign power of trying to intervene in the a U.S. election.

"No, it gives me no pause," the celebrity businessman said.

"If Russia or China or any of those country gets those emails, I've got to be honest with you, I'd love to see them."

"This has to be the first time that a major presidential candidate has actively encouraged a foreign power to conduct espionage against his political opponent," senior policy adviser Jake Sullivan said in a statement. "That's not hyperbole, those are just the facts. This has gone from being a matter of curiosity, and a matter of politics, to being a national security issue."

Trump also suggested that Clinton should not receive any security briefings due to the hack that would ensure "that word will get out."

Trump has said that he has "zero investments" in Russia and insisted that his company had not received any significant investments from the country. He also has downplayed his affection for Putin and said he would treat the Russian leader "firmly," though he said he wanted to improve relations with Russia.

Some Democrats and security experts have said that Trump's proposal to set conditions on NATO allies could risk Russian expansion in Eastern Europe.

President Barack Obama, meanwhile, said "anything's possible" when asked during an interview whether the Russians could be working to sway the election toward Trump.

"Donald Trump has repeatedly expressed admiration for Vladimir Putin," Obama said during the sit-down with NBC News that aired Tuesday. "And I think that Trump's gotten pretty favourable coverage back in Russia."

Obama and the other NATO leaders have accused Russia of "destabilizing actions and politics," including its 2014 annexation of Crimea. The act fuelled angst in the Eastern Europe about Russian aggression.

Trump said, if elected, he'll look into whether Russia was justified in seizing control of the Ukranian region of Crimea.

When asked at a press conference Wednesday whether he would recognize Crimea as Russian territory and if he would consider lifting sanctions against Moscow, Trump said: "We'll be looking at that. Yeah, we'll be looking."

Earlier this month, Trump suggested the U.S. could abandon its NATO treaty commitments in some cases.