Russian officials have confirmed that eight of the 64 people killed in a fire in a Siberian mall were children and that emergency exits were blocked.

Witnesses say fire alarms were silent and staff were nowhere to be seen when a fire at a shopping mall packed with children and their parents on the first weekend of the school recess killed 64 people in Russia's Siberia.

The fire at the Winter Cherry mall in Kemerovo, a city about 3,600 kilometres east of Moscow, was extinguished by Monday morning after burning through the night.

Sixty-four deaths were confirmed after firefighters finished combing through the four floors of the mall, Emergency Situations Minister Vladimir Puchkov told a televised briefing. Six of the bodies have not yet been recovered. Some of the dead were found inside a cinema, which one witness said had been locked shut.

Investigators said Monday that emergency exits were blocked and a security guard turned off the public announcement system when he received a call about the blaze, but they provided no information about why that happened.

On Monday morning, Kemerovo residents were bringing flowers, candles and stuffed animals to a plaza outside the mall, and local hospitals reported an influx of people wanting to donate blood for the victims.

Out of 23 victims whose bodies have been identified, eight are children, the emergency officials said. 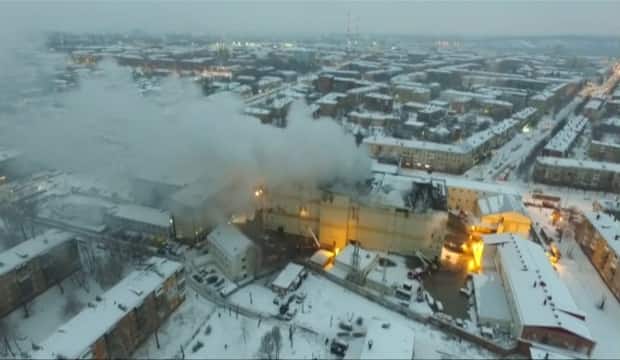 Thirteen people have been hospitalized. Health Minister Veronika Skvortsova, who visited the Keremovo hospital where the victims were receiving treatment, said on Russian state television that the patient in the gravest condition is an 11-year-old boy who jumped out of a window from the fourth floor. The boy's parents and younger sister died in the fire, Skvortsova said.

Some 200 animals are also believed to have died in the mall's petting zoo. The zoo's manager told Russia's TASS news agency that the animals included rabbits, turtles, pigs, goats and rodents.

Russia's top investigative body said Monday afternoon that they are searching for a security officer who appears to have turned off the PA system when he received a call about the blaze.

Four people have been detained in connection with the deadly fire, including one of the mall's tenants. The investigators did not give the cause of the fire but said they have obtained evidence proving "flagrant violations" that could have contributed to the heavy loss of life, including the fact that the fire escapes were blocked.

Kremlin spokesperson Dmitry Peskov told reporters on Monday it was too early to draw conclusions about whether local officials failed in Kemerovo.

Witness testimony indicated that the fire alarms were not working, but it was not clear why. Eyewitnesses also said that staff did not arrange for the evacuation at the shopping mall, which was converted from a former confectionery factory in 2013.

'The fire was in front of me'

Winter Cherry was one of Kemerovo's most popular entertainment centres for children, with its own indoor skating rink, petting zoo and trampolines. Kemerovo residents said the mall was packed with children and their parents.

Anna Zarechneva who was on the top floor where the fire started, watching a movie with her husband and son, said they only found out about the fire when a man ran into the theatre shouting.

"We didn't hear the fire alarm, they even didn't turn on the light during the show," she said. "That movie could have been the last for us — I've only just realized that."

Alexander Lillevyali lost three daughters — 11-year-old twins and a five-year-old — who were in a cinema hall on the top floor watching a cartoon.

Lillevyali told the Meduza news website that one of his daughters called him, saying they could smell the smoke but could not get out because the door was locked.

"I was shouting into the phone, telling her to get out, but there was nothing I could do — the fire was in front of me," he said.

The Prosecutor General's Office on Monday ordered all shopping malls in Russia to be checked for fire safety features.

Russian companies routinely complain about excessive checks from various government agencies, which often abuse elaborate rules and regulations to pressure businesses. As a result, many companies prefer to pay bribes instead of complying with outdated and excessive regulations, including fire safety rules.

President Vladimir Putin late on Sunday offered his "deep condolences" to the families of the victims. Prime Minister Dmitry Medvedev called for a moment of silence at a session of the government on Monday.

Pope Francis said in a telegram to Putin that he is "deeply saddened" by the loss of life. German President Frank-Walter Steinmeier and Chancellor Angela Merkel both issued condolences to Russia, with Merkel quoted as telling Putin: "We grieve with you."

More than 24 hours after the blaze engulfed the building, the owner of the mall still has not come forward.

Local media named millionaire Denis Shtengelov who built his fortune through a company producing snack food, as the owner of the mall. Shtengelov, however, insisted in an interview with the business daily Vedomosti that even though he was initially a majority owner of the mall, he now owns only a minority stake along with "many" other unnamed investors.

Igor Yurgens, president of the Russian Union of Insurance Companies, told state television that individual shops were insured but the mall does not appear to have an insurance policy. Yurgens speculated that the mall did not sign an insurance contract because its fire safety features were below standards.