Revellers marked the Queen's 60 years on the throne and lined the banks of the River Thames on Sunday to witness an elaborate water pageant featuring key members of the Royal Family.

Boats from more than 50 Commonwealth countries take part in flotilla 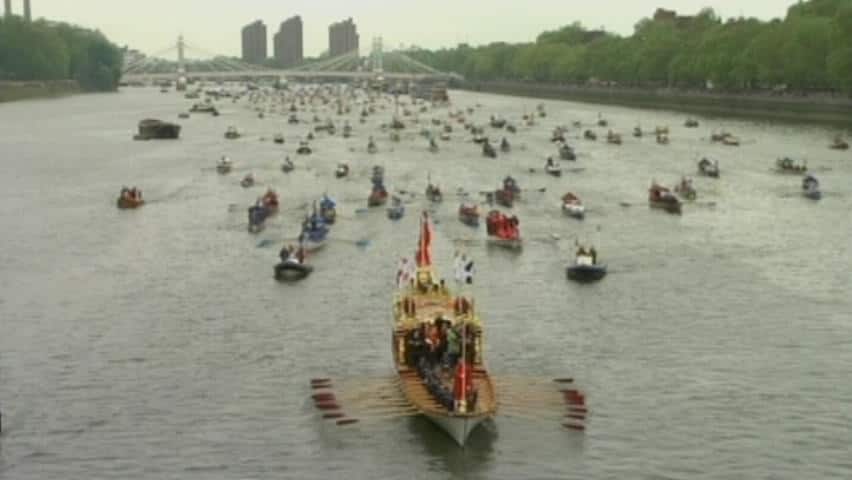 9 years agoVideo
3:51
More than a million spectators lined the Thames River in London, England, to welcome the Queen's flotilla of over 1,000 boats to mark her Diamond Jubilee 3:51

Revellers marked the Queen's 60 years on the throne and lined the banks of the River Thames on Sunday to witness an elaborate water pageant featuring key members of the Royal Family.

An estimated 1.25 million people were on hand for the theatrical extravaganza marking the Queen's Diamond Jubilee — a flotilla of 1,000 vessels.

Queen Elizabeth and her husband Prince Philip, 90, led the river pageant aboard the Spirit of Chartwell, floating along the 11-kilometre route winding through central London.

The 86-year-old queen wore a silver and white dress and matching coat — embroidered with gold, silver and ivory spots and embellished with Swarovski crystals to evoke the river — for her trip aboard the barge Spirit of Chartwell, decorated for the occasion in regal red, gold and purple velvet.

Members of the Royal Family who joined the monarch aboard the flower-strewn luxury vessel included Prince Charles and his wife Camilla, Prince William and his wife Catherine, and Prince Harry.

They passed under 14 bridges to finish at Tower Bridge. Trumpeters were at every bridge to herald the Queen.

Military boats, D-Day boats, paddle steamers, barges, duck boats, kayaks, dragon boats, skiffs, gondolas and even a replica of a Viking longboat — vessels from across the Commonwealth — took part in the flotilla.

Guinness World Records said the pageant set a record for the largest parade of boats, surpassing the previous record of 327 boats in Bremerhaven, Germany, last year.

The event took place in cool, drizzly weather. On one of the vessels, the London Philharmonic Orchestra conducted by David Parry entertained the crowd. Musical barges separated each of the flotilla's 10 sections.

Five boats had Canadians on board. The only Canadian-built boat, the Canada One canoe, was powered by eight paddlers.

Just ahead of the canoe were 14 paddlers from the Vancouver area, breast cancer survivors, in a borrowed English dragon boat named Abreast from the West.

On Monday, the Queen will join thousands of others at an outdoor concert beside Buckingham Palace, headlined by pop royalty including Paul McCartney, Stevie Wonder, Annie Lennox and Elton John.

Canadian Prime Minister Stephen Harper left for London on Sunday to take in the festivities. He will attend Monday night's televised concert.

The Prime Minister's Office said Harper will also attend a Tuesday service at St. Paul's Cathedral with the Queen and the Royal Family. On Wednesday, Harper will join other Commonwealth leaders at a luncheon and be on hand for the unveiling of a new portrait of the Queen.

Up to 50 large screens were placed along the Thames to help people to view the river pageant.

Hundreds of people ignored the persistent rain and camped out overnight to secure prime riverside spots.

The flotilla was organized as a tribute to the Queen's 60 years on the throne and to Britain's past when, for centuries, monarchs used the river as their main highway.

It was a spectacle not seen since the reign of Charles II, who in 1662 threw what some described as the party of the 17th century by staging a 1,000-boat flotilla on the Thames.

Jubilee celebrations kicked off Saturday with a royal day at the races, as the Queen watched a horse with the courtly name of Camelot win the Epsom Derby.

The second of four consecutive days of Diamond Jubilee celebrations included thousands of street parties across the country.