Coming into his own: Prince William, the pandemic and a higher profile

A few years ago, questions arose over how interested Prince William was in royal duties, but more recently the second-in-line to the throne has seen his stature rise, particularly as he offers reassurance to people facing the stress of the pandemic.

2nd-in-line to throne has shown leadership reaching out to people, biographer says

A few years ago, there were mutterings about whether a "work-shy" Prince William was as interested as he might be in the role he had as No. 2 in line to the throne.

In an interview at the time of his grandmother Queen Elizabeth's 90th birthday in 2016, William responded that he takes duty very seriously.

Since then, however, and particularly during the pandemic, there has been a sense things are changing for him.

"I think William has grown in stature in the last couple of years and really come into his own," royal biographer Penny Junor, author of Prince William: The Man Who Will Be King, said in an interview.

"And during lockdown, he showed great leadership."

Junor points to "broadcasting in the way he did" as William took part in numerous video and social media endeavours to give support in the fight against COVID-19, along with how he was "reaching out to people and offering reassurance and comfort at a time when we were losing faith in our politicians."

All that "was very valuable," Junor said via email, "and a useful demonstration of what monarchy is for."

Indeed, the headlines that questioned William's interest in his role have been replaced by ones that talk of "how William became the Royal Family's resident grownup."

Some observers see change in William as a response to changes around him. He has become a father, and his younger brother, Harry — with whom he was very close as they grew up in the shadow of the death of their mother — has stepped back from the upper echelons of the Royal Family and lives with his wife, Meghan, in California.

"William has always had this ability to connect with people," Seward said. "He's very natural and not at all fake. He's always had it but I think perhaps he was overshadowed by Harry. Now he's no longer on the scene, we are reminded that William has the same qualities in spades."

Junor said she thinks the problem was that the two princes were treading on each other's toes.

"Harry was second in the pecking order and probably found that difficult at times, and William was possibly frustrated at times by the media attention Harry and Meghan were attracting," she said.

"Harry and Meghan's departure has inevitably made more work for [William and his wife, Kate] but the waters are no longer muddied."

In ways, William's coming into his own has been a steady evolution over the past few years. A solo trip to the Middle East in 2018, along with a trip with Kate to Pakistan last year, burnished his international profile. And he's now focusing efforts on environmental issues, following in the footsteps of his father, Prince Charles.

Still, questions returned this week as word emerged that William had COVID-19 in the spring, around the same time Charles let everyone know he had had — and subsequently recovered from — the disease. Why, some observers wondered, was William's illness not revealed to the public at the time?

"Not making the news public certainly was a break with precedent, but I think it is in character with what we know about William," said Junor.

"He is fiercely private and feels strongly that there should be boundaries between the public and private sides of his life — which his parents never achieved. I can see he might feel that his health is strictly private — and since he is not yet monarch and not yet even next in line, I think that's arguably reasonable."

Looking into links to the slave trade

A new curator being hired by the organization that manages historic royal properties, including Kensington Palace and Hampton Court Palace, will look into their connections to the slave trade.

Historic Royal Palaces did not respond to a request for comment, but a spokesperson told the Guardian newspaper: "We cannot ignore the fact that for hundreds of years colonialism and empire, enslavement and exploitation were part of our national story.

"As seats of power, the palaces in our care are connected to that history. We expect the research will address this in more depth."

Lucy Worsley, head curator of Historic Royal Palaces, told the Times newspaper that any properties used by the Stuarts are "going to have an element of money derived from slavery."

The Stuart period lasted from 1603 to 1714. During that time, monarchs included William III, who reigned jointly with his wife, Mary. They transformed the former Nottingham House into Kensington Palace, where Prince William, Kate and their three children now live in London.

Also during the Stuart period, the Royal African Company had a lucrative monopoly trade that included slaves, sending them to the Americas. King James II, when he was Duke of York, ran the original company. William III was a part-owner of the company after slave trader Edward Colston transferred shares in it to him when he ascended the throne in 1689.

"When you think about the whole issue of the slave trade and the connection with the monarchy, if you go online, you're not going to find a book which specifically deals with this," said Paulina Kewes, an English professor at Oxford University who teaches the Stuart period. "There isn't a book called The British Monarchy and the Slave Trade or Stuarts and the Slave Trade."

Kewes sees a need in Britain for "wider dissemination of some facts which may not be comfortable but which need to be in the public domain."

And that, she said, "needs to be communicated to the wider public in a sensitive, thoughtful way."

In many ways, she said, "it's very nice that Historic Royal Palaces will now have a curator for inclusive history. It's just a shame that it's so little so late."

From her perspective, the best possible outcome of Historic Royal Palaces's endeavour would be if "they didn't try to go it alone."

"I think that it is absolutely necessary that Historic Royal Palaces should work alongside galleries, the National Trust, the National Archives, museums of all kinds," she said.

"[There] should be a proper network which specifically addresses the role of the slave trade in the history, [the] culture, of this country, its impact on art and architecture, on all sorts of things, and not reinvent the wheel."

As with pretty much everything else, the pandemic is prompting changes to the ways of honouring those who have fallen in war.

Members of the Royal Family took part in modified remembrance commemorations in London on Sunday. But even without the impact of the pandemic, there would likely have been two notable royal absences.

Those absences carry a certain degree of irony, given that they involve the two members of the Royal Family who have had high-profile service in the Armed Forces.

Prince Harry, living in the U.S. and having stepped back as a working member of the Royal Family, was not there. He spent a decade in the army and did two tours in Afghanistan. In a podcast Sunday, the BBC reported he said: "Being able to wear my uniform, being able to stand up in service of one's country, these are amongst the greatest honours there are in life."

Prince Andrew also was absent Sunday, having stepped back from royal duties amid the fallout from his friendship with convicted sex offender Jeffrey Epstein.

Royals made other appearances of remembrance earlier in the week, including Queen Elizabeth, who did a low-profile trip to Westminster Abbey in central London on Wednesday to mark the centenary of the burial of the unknown soldier.

Camilla, Duchess of Cornwall, was also at Westminster Abbey on Wednesday for a remembrance service that had been attended by Prince Harry for the past few years.

Prince Charles and Camilla made their first trip to Canada as a couple in early November 2009.

The 11-day trip, which took them from coast to coast, began in St. John's on Nov. 2 and included stops in Quebec, Ontario and British Columbia.

While there were warm welcomes in some places, crowds were sparse in others, and there were anxious moments in Montreal when riot police had to push back about 200 anti-monarchists before Charles and Camilla visited an armoury. 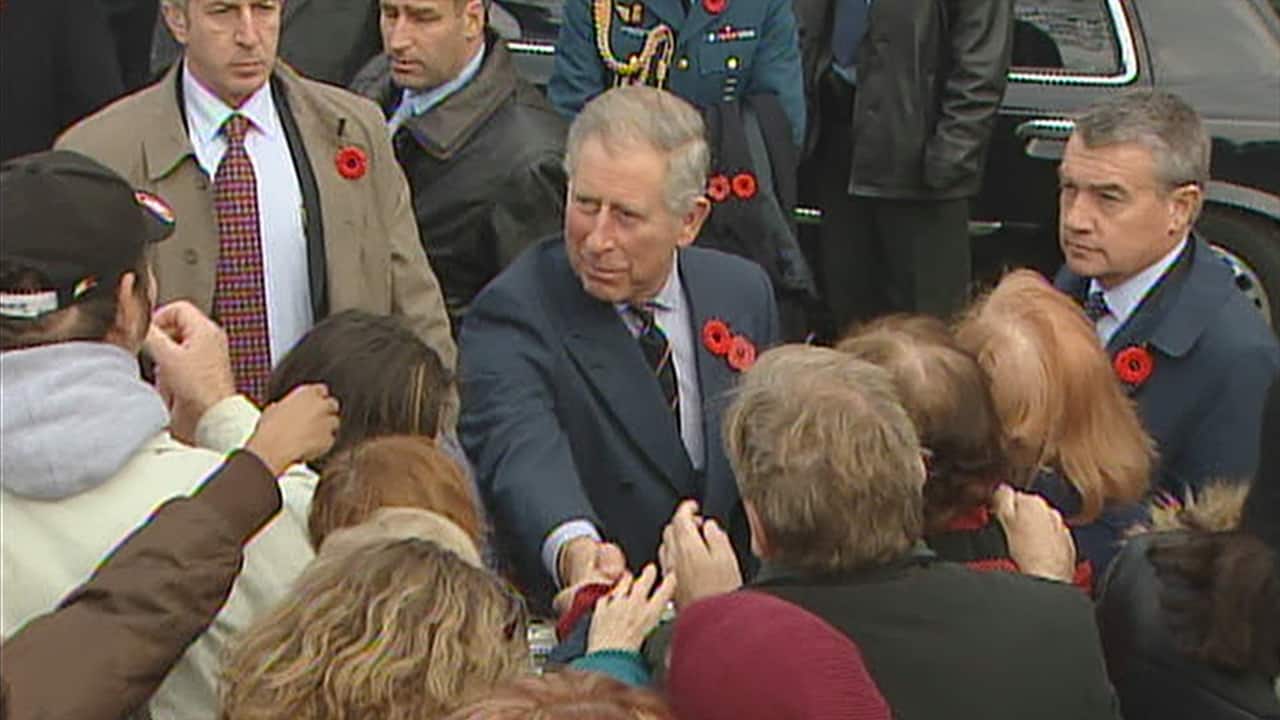 11 years agoVideo
3:13
During a 2009 visit to Canada, Prince Charles and the Duchess of Cornwall made an effort to connect with Canadians. 3:13

In Vancouver, anticipation was high for the 2010 Winter Olympic Games, with the couple touring the athletes' village, meeting the mascots and getting their own pairs of the much-sought-after red mittens.

"I'm one of those people who hate throwing anything away. Hence, I'd rather have [clothes] maintained, even patched if necessary, than to abandon them."

— Prince Charles talks about his approach to his wardrobe, and his commitment to sustainable fashion, in an interview with Edward Enninful, editor in chief of British Vogue.