U.S. President Donald Trump kept uncharacteristically silent and out of the fight today as national Republicans called ever more insistently for Roy Moore to abandon his Alabama campaign for the U.S. Senate and party officials sourly debated options that none of them liked.

Attorney tries to discredit 1 of Moore's accusers, calls for yearbook to be released

U.S. President Donald Trump dodged questions about the turmoil in the Alabama Senate race on Wednesday, declining to join national Republicans who've called for Roy Moore to abandon the race amid allegations of sexual impropriety with teenage girls. Far from surrendering, Moore's camp challenged the credibility of one of the accusers.

Trump, who withstood allegations of sexual assault weeks before his own election, was uncharacteristically silent when faced with questions about the scandal, which has rattled the party and left Moore's would-be colleagues threatening to expel him should he win. Republicans had looked to Trump as one of the few remaining hopes for pushing a fellow political rebel from the race.

Moore, meanwhile, offered fighting words in a tweet addressed to the top Senate Republican: "Dear Mitch McConnell, Bring. It. On."

Chris Hansen, executive director of the national Republican Senate campaign committee, fired back, "Bring It On is a movie about cheerleaders."

In Alabama, Moore's campaign chairman and personal attorney did address reporters, trying to undercut the story of one of the women who has accused Moore of sexually accosting her when she was in high school.

The attorney, Phillip Jauregui, demanded that Beverly Nelson "release the yearbook" she contends Moore signed. The lawyer questioned whether the signature was Moore's and said it should be submitted for handwriting analysis. Neither the attorney nor the campaign manager addressed the original allegations from Leigh Corfman who says that Moore initiated sexual contact with her when she was 14. They did not take questions. 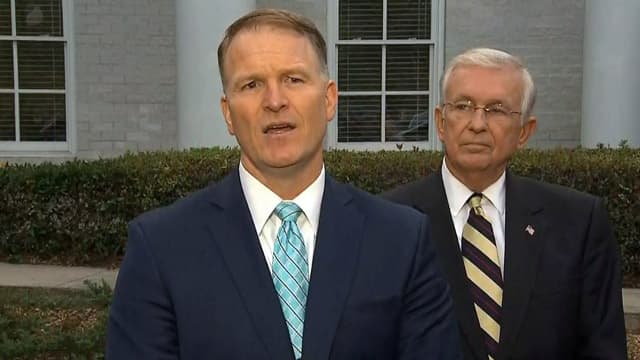 3 years agoVideo
1:44
Phillip Jauregi, Moore's lawyer is pushing back against one or the Alabama Republican's accusers, saying he wants to see a yearbook at the heart of the allegation 1:44

Gloria Allred, Nelson's attorney, later said her client would allow the yearbook to be examined only if Moore is questioned under oath by a Senate committee.

The unusual news conference suggested Moore, a judge twice removed from his post as state Supreme Court chief justice, was digging in, leaving his party with two damaging potential election outcomes. His victory would saddle GOP senators with a colleague accused of abusing and harassing teenagers, a troubling liability heading into next year's congressional elections, while a loss to Democrat Doug Jones would slice the already narrow Republican Senate majority to an unwieldy 51-49.

Swing in the polls

It's too late to remove Moore's name from the ballot, so fielding a Republican write-in at this point would almost certainly hand the election to the Democrats unless he should withdraw and persuade his supporters to vote for that substitute.

According to internal polling conducted by the Senate Republican campaign arm and reviewed by The Associated Press, Moore trails Democrat Jones by 12 points — 39 per cent to 51 per cent — in the survey conducted on Sunday and Monday. Moore led by nine points the week before in the National Republican Senatorial Committee's internal numbers.

Behind the scenes, aides described Trump as vexed by the Moore issue. Even if he should speak out, he might make an uncomfortable critic: The allegations against the bombastic former judge echo Trump's own political problems when he was accused weeks before the 2016 election of more than a dozen instances of sexual harassment. The Trump aides would not be named discussing the matter because they were not authorized to discuss private conversations.

To a great extent, the anti-establishment forces that propelled Trump to the White House are now strongly behind Moore, and Alabama Republican leaders are reluctant to enrage his loyal conservative supporters. State Republican leaders are highlighting party rules that could allow them to crack down on Alabama officials who support anyone else.

Alabama Republican officials convened in person and by phone late Wednesday to discuss the situation. The 21-member party steering committee did not take a final vote after an hours-long meeting, which took place before new allegations of misconduct surfaced. For now, the committee is expected to maintain support for Moore, according to three people familiar with the meeting who weren't authorized to speak publicly.

The state Republican Party has the power to revoke Moore's nomination and ask election officials to ignore ballots cast for him, but that would risk a lawsuit and backlash from Moore supporters. The party has little interest in alienating Moore's followers a year before elections in which the governor's office and entire state legislature will be in play.

A regional Republican committee representing the state's 5th congressional district approved a new resolution of support for Moore and asked the state party to do the same.

Trump backed Moore's unsuccessful rival, Senator Luther Strange, in the Republican primary. Moore has the backing of Trump's former chief strategist, Steve Bannon. And Bannon's conservative news site, Breitbart, has led the charge in trying to discredit the allegations against the candidate.

Officials cautioned that the actions of Washington Republicans, including the president, were unlikely to affect Moore's decision-making — and that any moves against him could backfire. For example, calling for Moore to exit the race could risk embarrassment if, as expected, Moore defied the request. Officials said the White House did sign off on the Republican National Committee's decision to cut ties with Moore.

Republican leaders were openly discussing a write-in candidate, although they had not yet agreed on who it should be. Senate majority leader Mitch McConnell has encouraged Attorney General Jeff Sessions to step up. But Sessions, whose former Senate seat is at stake, has indicated he has no interest in that.

Alabama Senator Richard Shelby said Wednesday that he'll write in another name on Election Day and Sessions would be an "ideal candidate." But he also said "I don't see any movement" toward an effective effort with the election less than a month away.

One prominent conservative voice — Fox News Channel host Sean Hannity — eased off on Moore Wednesday. On his Tuesday evening show, Hannity gave Moore 24 hours to explain "inconsistencies" in his response to allegations of child molestation or else exit the Alabama race.

Moore responded in a letter Wednesday: "I adamantly deny the allegations of Leigh Corfman and Beverly Nelson, did not date underage girls, and have taken steps to begin a civil action for defamation. Because of that, at the direction of counsel, I cannot comment further."

Hannity noted Wednesday night that things appeared to be worsening for Moore, but said only that Alabama voters would ultimately "make the best decision for their state."

Corfman and Nelson have said Moore molested them in the 1970s when one was 14, the other 16 and he was a local deputy district attorney in Gadsden in his 30s. Three other women have said he pursued romantic relationships with them around the same time.

Gena Richardson told The Washington Post she agreed to a date with Moore in 1977, around her 18th birthday, when Moore was 30. Richardson said the date ended with giving her an unwanted, "forceful" kiss. ""I never wanted to see him again," Richardson told the Post.