Rohingya refugees in Bangladesh on 'precarious ground' ahead of monsoon season

Aid workers in Bangladesh are ramping up preparations in the weeks leading into monsoon season, amid warnings that at least 200,000 Rohingya refugees are at direct risk of being forced out of camps by flooding or landslides.

At least 200,000 could be forced out of camps by flooding, landslides

Aid workers tending to Rohingya refugees from Myanmar are ramping up preparations in the weeks before the start of monsoon season, amid warnings that makeshift shelters in their Bangladesh camps could be destroyed by mudslides and flooding.

Myanmar's panel of international advisers on issues concerning the Rohingya recently warned that the season, which begins in earnest in June and runs until October, could bring "enormous deaths," because the refugee camps are not built to withstand the rainstorms.

Daphnee Cook with Rohingya Response at Save the Children visited a camp in the border town of Cox's Bazar in southern Bangladesh on Friday to inspect the damage after pre-season heavy rains hit on Wednesday, and she spoke to CBC's Joan Leishman. Listen to the full interview below: 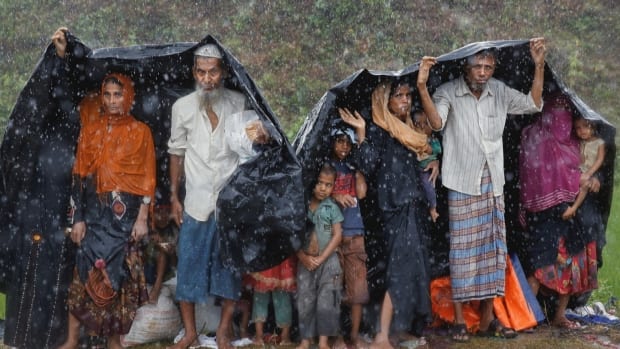 Cook said a swath of forested land was rapidly cleared to make room for the camps last year — and when she met with the refugees this week, some reported their homes were destroyed after just one day of heavy rain.

"People are living on very precarious ground ... and the expectation is that at least 200,000 people are at direct risk of either being flooded out or [forced out by] landslides," she said.

Some 700,000 Rohingya Muslims have crossed into Bangladesh since a military crackdown on the minority group last August.

Most now live in flimsy, bamboo-and-plastic structures perched on hills around Cox's Bazar. Deforestation means the land is less stable in wet conditions.

Cook said monsoon preparations include some of the following measures:

"It's basically entering a new phase of misery for many of these people, but also particularly for the children," Cook said.

Cook said Cox's Bazar could be inundated with up to three metres of rain over the three months of the monsoon season. She said once the mid-season rains arrive, there is typically a downpour every day until the end of August.

"We are at this time in a race against time, warned Kobsak Chutikul, head of the Myanmar advisory group, speaking at a news conference in Singapore earlier this month.

"There will be enormous deaths if all parties do not move to some understanding on repatriation, on aid," he said.

Cook said it's "extremely optimistic" to say there will not be a loss of life once the heaviest storms hit.

With files from CBC's Joan Leishman and Reuters