Number of Rohingya refugees crossing into Bangladesh swells to 270,000

​The UN Refugee Agency reports a surge in the number of Rohingya Muslims who have crossed into Bangladesh from Myanmar, with an estimated 270,000 arriving in the last two weeks. 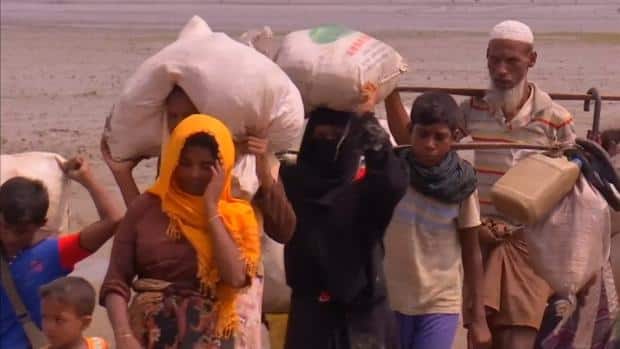 The UN said Friday that an "alarming number" of 270,000 Rohingya Muslims have fled violence in Myanmar by crossing into Bangladesh in the last two weeks.

The new figure confirmed Friday by UN Refugee Agency spokesperson Vivian Tan is much higher than the 164,000 the agency had previously estimated had arrived since Aug. 25.

"This is an alarming number," Tan said. "The existing camps are full to the capacity. There is a lot of pressure on relief agencies to accommodate the rising numbers."

She said the new number was still a "rough estimate," and based on an assessment that involved a host of aid agencies operating in the area. Some aid groups also had identified "new pockets of people that we did not know about before, mainly in villages" where Bangladeshi communities had taken them in, but also some new settlements and clusters in difficult-to-access areas.

She said it was possible some people who received help from multiple agencies could have been counted twice.

The exodus from Myanmar's northern Rakhine state began Aug. 25 after Rohingya insurgents attacked police posts. The military responded with what it called "clearance operations" to root out any fighters it said might be hiding in villages of Rakhine state.

The Myanmar government says nearly 400 people have been killed in fighting it blames on insurgents, though Rohingya say they Myanmar troops and Buddhist mobs attacked them and destroyed their villages.

It's not known how many Rohingya remain in Rakhine state. Previously, the population had been thought to be roughly one million.

Journalists in northern Rakhine state saw active fires in areas Rohingya had abandoned, adding to doubts over government claims that Rohingya themselves were responsible for setting them.

Associated Press reporters who have been in Rohingya camps all week saw a surge in the number of people entering Bangladesh on Thursday and Friday.

An increasing number of Rohingya were also arriving by boat, with 300 boats reaching the Bangladesh town of Cox's Bazar from Myanmar on Wednesday alone, according to the International Organization for Migration.

"Sea routes are particularly dangerous this time of year, when boats are known to frequently capsize in rough seas," the IOM said in a statement.

Dozens of Rohingya have died in capsizings since the exodus began, and there are other dangers as well. On Monday, the AP saw an elderly woman whose leg had been blown off when she set off a land mine.

Land mines were planted years ago along parts of the border. Bangladeshi officials say Myanmar soldiers have planted new explosives since the latest wave of violence began, though the Myanmar military denies it.

"It may not be land mines, but I know there have been isolated cases of Myanmar soldiers planting explosives three to four days ago," Lt.-Col. S.M. Ariful Islam, commanding officer of the Bangladesh border guard in Teknaf, said Friday. He added that he was aware of at least three Rohingya injured in explosions.

There are now massive crowds of Rohingya in the streets of towns including Cox's Bazar and Teknaf, with relatively few soldiers or police and even fewer signs of aid agencies.

At a small makeshift mosque made of bamboo sticks and plastic sheets, a small group of new arrivals offered prayers Friday, the holiest day of the week in Islam.

Later, members of a local organization were seen distributing aid, throwing packets of puffed rice and old clothes into huge crowds of Rohingya. There are no clearly organized points of distribution.

Tan, of the refugee agency, said it was distributing aid through a local organization that preferred to keep a low profile.

UN agencies have released $8 million US in emergency aid in the area, but were pleading for millions more.