'It's not a concentration camp': Bangladesh defends plan to house Rohingya on island with armed police

Bangladesh is racing to turn an uninhabited and muddy Bay of Bengal island into home for 100,000 Rohingya Muslims who have fled a military crackdown in Myanmar, amid conflicting signals from top Bangladeshi officials about whether the refugees would end up being stranded there.

'No one in the humanitarian community we spoke to … thought this was a good idea,' rights advocate says

CBC News · Posted: Feb 22, 2018 10:17 AM ET | Last Updated: February 22, 2018
Bangladesh is racing to turn an uninhabited and muddy Bay of Bengal island into home for 100,000 Rohingya Muslims who have fled a military crackdown in Myanmar, amid conflicting signals from top Bangladeshi officials about whether the refugees would end up being stranded there.

Bangladesh Prime Minister Sheikh Hasina said on Monday that putting Rohingya on the low-lying island would be a "temporary arrangement" to ease congestion at the camps in Cox's Bazar, refuge for nearly 700,000 who have crossed from the north of Myanmar's Rakhine state since the end of August last year.

However, one of her advisers said that once there, they would only be able to leave the island if they wanted to go back to Myanmar or were selected for asylum by a third country.

I would rather die right here.- Jahid   Hussain , Rohingya  refugee

"It's not a concentration camp, but there may be some restrictions. We are not giving them a Bangladeshi passport or
ID card," said Hossain Toufique Imam, adding that the island would have a police encampment with 40-50 armed personnel.

Relocation could be decided on lottery basis

British and Chinese engineers are helping prepare the island to receive refugees before the onset of monsoon rains, which could bring disastrous flooding to ramshackle camps further south that now teem with about one million Rohingya. The rains could start as early as late April.

Hasina's adviser, Imam, said the question of selecting Rohingya in Cox's Bazar to move to the island was not finalized,
but it could be decided by lottery or on a volunteer basis.

The United Nations High Commissioner for Refugees said in a statement: "We would emphasize that any relocation plan involving refugees would need to be based on and implemented through voluntary and informed decisions." 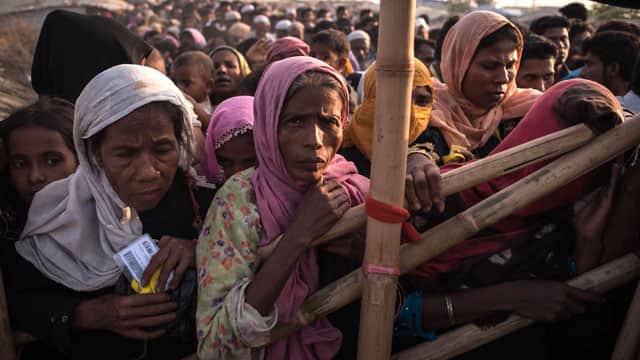 Humanitarian agencies criticized the plan to bring Rohingya to the island when it was first proposed in 2015. Aid workers
who spoke to Reuters said they remain seriously concerned that the silt island is vulnerable to frequent cyclones and cannot sustain livelihoods for thousands of people.

But work on the project has accelerated in recent months, according to architectural plans and two letters from the
Bangladesh navy to local government officials and contractors seen by Reuters.

A year ago, when Reuters journalists visited Bhasan Char — whose name means "floating island" — there were no roads, buildings or people.

Returning on Feb. 14, they found hundreds of labourers carrying bricks and sand from ships on its muddy northwest
shore. Satellite images now show roads and what appears to be a helipad.

Floating Island, which emerged from the silt only about 20 years ago, is about 30 kilometres from the mainland. Flat and shape-shifting, it regularly floods during June-September. Pirates roam the nearby waters to kidnap fishermen for ransom, residents of nearby islands say.

The plans show metal-roofed, brick buildings raised on pylons and fitted with solar panels. There will be 1,440 blocks,
each housing 16 families.

A Sinohydro engineer on Bhasan Char, reached by telephone later, said the company had "confidentiality agreements" and that questions about construction on the island should be referred to the Bangladesh government.

HR Wallingford, a British engineering and environmental hydraulics consultancy, is advising the project on "coastal
stabilization and flood protection measures," the company told Reuters in a statement earlier this month.

"The coastal infrastructure design is expected to include a flood defence embankment protecting the development area to international standards, set back from the shoreline," it said. The company referred further inquiries to the Bangladesh Navy.

Omar Waraich, deputy South Asia director for rights group Amnesty International, said there was "no one in the
humanitarian community we spoke to who thought this was a good idea".

"This is a silt island that only emerged into view recently," he said.

Residents of nearby Sandwip island, which is larger and less remote, say monsoon storms regularly kill people, destroy homes and cut contact with the mainland.

However, a senior member of the prime minister's staff, Kabir Bin Anwar, said humanitarian organizations critical of the plan were "absolutely wrong because they don't understand the topography" of Bangladesh.

The government was building cyclone shelters on the island, he said, adding that there were salt-tolerant paddies and people living there could fish or graze cows and buffalo.

"We don't need help from any foreign NGOs or local NGOs. We can feed them," he said.

Bangladeshis living on nearby islands are critical of their government's efforts for the Rohingya.

Belal Beg, 80, who was born on Sandwip island, said there was resistance to settling Rohingya on Bhasan Char because huge numbers of Bangladeshis are displaced by coastal erosion each year with no measures taken to protect them.

"We should first care for our own people but the government is deciding to give shelter to immigrants," Beg said

Many Rohingya also reject the idea of moving to an island even further from Myanmar, which many of them have called home for generations.

Jahid Hussain, a Rohingya refugee at Chakmakul refugee camp in Bangladesh, said he had fled Myanmar to save his life and would not risk it by living on Bhasan Char.

"I would rather die right here," he said.

The latest unrest in Myanmar's Rakhine state began in late August, when Rohingya insurgents attacked dozens of police posts and an army base, prompting an army counter-offensive that forced entire villages to flee. They joined about 300,000 Rohingya already in Bangladesh, one of the world's poorest and most crowded nations, who had fled previous bouts of violence.

Aung San Suu Kyi, Nobel peace laureate and leader of Buddhist-majority Myanmar, has been heavily criticized by
Western nations for not speaking out against what the United States and the United Nations have branded ethnic cleansing.

Myanmar denies that ethnic cleansing has taken place and says it has been conducting legitimate operations against
terrorists in northern Rakhine.

Describing the island, Hasina told a news conference in Dhaka that "from a natural point of view, it is very nice" and said although the initial plan was to put 100,000 people there, it had room for as many as a million.