Roger Stone, a confidant of U.S. President Donald Trump, was released on $250,000 US bond Friday after being indicted as part of the U.S. special counsel's Russia investigation. Stone's lawyer says he will "contest the charges vigorously."

Roger Stone, a confidant and former campaign adviser of U.S. President Donald Trump, has been arrested on several criminal charges stemming from the U.S. special counsel's Russia investigation, according to a grand jury indictment made public Friday.

Stone, who was indicted on Thursday and arrested early Friday morning at his home in Florida, faces one count of obstruction of an official proceeding, five counts of making false statements and one count of witness tampering. The charges stem from Stone's interactions related to the release by WikiLeaks of hacked emails during the 2016 U.S. presidential election.

Some of those false statements were made to the House intelligence committee, according to the indictment brought by U.S. special counsel Robert Mueller.

The indictment does not accuse Stone of co-ordinating with the Russian government's election interference in 2016, the key matter under investigation in the probe.

The indictment lays out in detail Stone's conversations about stolen Democratic emails posted by WikiLeaks in the weeks before Trump, a Republican, beat Democratic opponent Hillary Clinton. Mueller's office has said those emails, belonging to Clinton campaign chairman John Podesta, were hacked by Russian intelligence officers.

Stone was dressed Friday in a dark blue polo shirt and jeans and was shackled for his brief court appearance.

Magistrate Judge Lurana Snow released Stone on $250,000 US bond. Stone is prohibited from travelling outside of south Florida, Washington, D.C., and New York City, and from having any contact with any witnesses.

Prosecutors also asked that Stone, who did not enter a plea, undergo a drug test, and his lawyer did not object.

Straining to make himself heard above the sound of protesters shouting, "Lock him up!" Stone on the steps of the courthouse called the investigation an "inquisition" that was "related in no way to Russian collusion or WikiLeaks collaboration."

Stone said he would plead not guilty and looked forward to being vindicated. 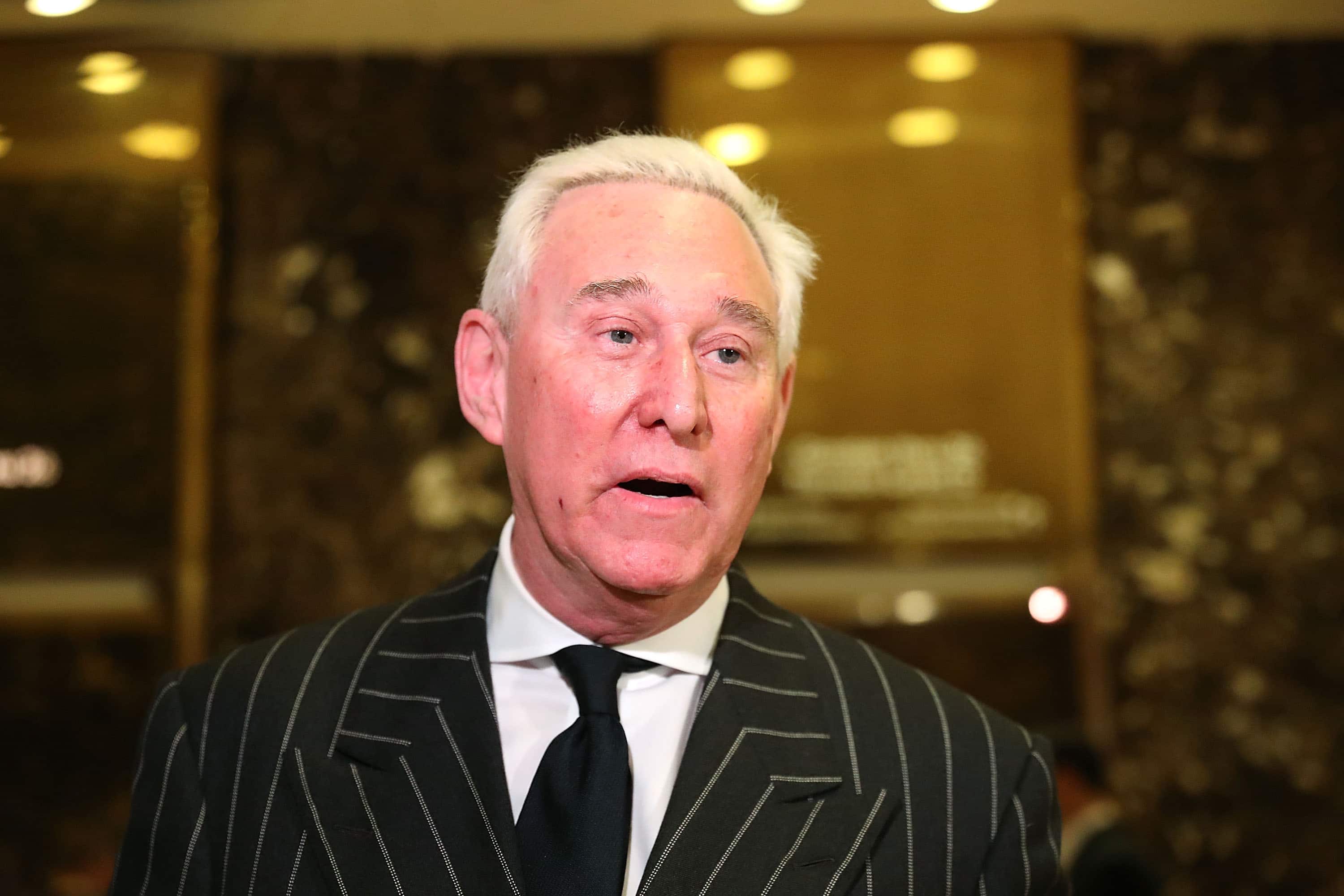 2 years agoVideo
0:51
CNN was in the area of Roger Stone's home in Fort Lauderdale early Friday when the FBI arrived. 0:51

CNN recorded video of the raid at Stone's Fort Lauderdale home, showing FBI agents in combat gear using large weapons and night-vision equipment, running up to the home and banging repeatedly on the door.

Stone could then be seen in the doorway in his sleepwear before he was led away, CNN reported.

Sarah Huckabee Sanders, Trump's press secretary, told CNN on Friday the charges brought against Stone "don't have anything to do with the president." Sanders did not offer an explanation as to how it was possible an increasing number of people in Trump's orbit who have been charged with criminal wrongdoing were acting without their boss's knowledge.

"The indictment today does not allege Russian collusion by Roger Stone or anyone else. Rather, the indictment focuses on alleged false statements Mr. Stone made to Congress," lawyer Jay Sekulow told Reuters in a statement.

In a tweet on Friday, Trump repeated his assertion there was no collusion with Russia, although there is no such federal crime called collusion but rather, conspiracy. In reference to the raid, Trump questioned why CNN was already there and said of the circumstances of Stone's arrest, "Border Coyotes, Drug Dealers and Human Traffickers are treated better."

The document says that by June and July 2016, Stone had told senior Trump campaign officials he had information indicating WikiLeaks had obtained documents that could be damaging to Clinton's campaign.

After the July 22, 2016, WikiLeaks release of hacked emails from the Democratic National Committee, the indictment says, a senior Trump campaign official "was directed" to contact Stone about additional releases and "what other damaging information" WikiLeaks had "regarding the Clinton campaign." The indictment does not name the official or say who directed the outreach to Stone.

In response to a question during his scrum after his court appearance, Stone said no one in the campaign directed him to contact WikiLeaks.

Another Trump campaign official cited in the indictment is Steve Bannon, who later became Trump's chief strategist in the White House. Bannon, referred to as a "high-ranking Trump Campaign official," exchanged emails with Stone in October 2016 about the WikiLeaks plans for releasing hacked material. The indictment quotes from those emails, which had previously been made public by news outlets.

While the indictment provides some new insight into the Trump campaign, it deals largely with what prosecutors say were Stone's false statements about his conversations with conservative writer and conspiracy theorist Jerome Corsi and New York radio host Randy Credico. Corsi is referred to as Person 1 in the indictment, and Credico as Person 2.

The indictment accuses Stone of carrying out a "prolonged effort" to keep Credico from contradicting his testimony before the House intelligence committee. During that effort, prosecutors note that Stone repeatedly told Credico to "do a 'Frank Pentangeli,"' a reference to a character in The Godfather: Part II who lies before a congressional committee.

Stone is also accused of threatening Credico. The indictment cites several messages, some of which have already been public, that Stone sent to Credico last year. On April 9, Stone called Credico a "rat" and a "stoolie," and accused him of backstabbing his friends. Stone also threatened to "take that dog away from you," a reference to Credico's dog, Bianca.

"I am so ready. Let's get it on. Prepare to die [expletive]," Stone also wrote to Credico.

Stone, who was among the earliest advisers to Trump's presidential campaign, has said for months he was prepared to be charged, though he has denied any wrongdoing. A grand jury for months had heard from witnesses connected to Stone, and the intelligence committee last year voted to release a transcript of Stone's testimony to Mueller as a precursor to an indictment.

Prosecutors had offered a plea agreement to Stone friend Jerome Corsi that would have required the conspiracy theorist and conservative author to admit he intentionally lied to investigators about a discussion with Stone about WikiLeaks. But Corsi rejected the offer.

While Trump has tried to downplay his personal relationship with some of those men, the relationship between Stone and Trump stretches back decades.

“I will never testify against Trump.” This statement was recently made by Roger Stone, essentially stating that he will not be forced by a rogue and out of control prosecutor to make up lies and stories about “President Trump.” Nice to know that some people still have “guts!”

The real estate tycoon was a client of the lobbying firm Black, Manafort and Stone beginning in the 1980s, and admitted in the recent documentary Get Me Roger Stone that the Republican operative has long groomed him for a run for political office.

"Roger always wanted me to run for president — I just didn't want to do it," said Trump in the documentary.

Stone was often by Trump's side as he talked up a possible 2000 bid for president as a candidate of the Reform Party.

In 2015, he was on board as Trump launched his bid for president as a Republican, but left the campaign under unclear circumstances in August that year, soon after Corey Lewandowski took over as campaign chair.

But as details of the indictment made clear on Friday, Stone was regularly in touch with Trump campaign officials through the election and into the transition.

Trump as recently as December was defending Stone and praising his apparent unwillingness to co-operate with authorities.

"Nice to know some people still have guts," Trump exclaimed.

On Thursday, hours before his arrest, Stone posted on Instagram a photo of himself with Trump and the caption, "Proud of my President."

Stone previously worked on presidential campaigns for Ronald Reagan, Arlen Specter and Bob Dole, although he was taken off the latter campaign in 1996 when a swingers ad featuring pictures of a barechested Stone and his wife were discovered by the National Enquirer.

Stone claimed he was the victim of a dirty trick, with someone obtaining the photos and placing the ad.