Workers in New Orleans have removed the last of four monuments to Confederate-era figures — a statue of Gen. Robert E. Lee.

Previous Confederate monument removals have been at night to limit threats to workers, officials

Workers in New Orleans have removed the last of four monuments to Confederate-era figures — a statue of Gen. Robert E. Lee.

The statue was lifted from its pedestal early Friday evening, capping a day in which hundreds gathered to gawk in a somewhat festive atmosphere.

Mayor Mitch Landrieu had proposed the removal of the monuments after the 2015 massacre of nine black parishioners at a South Carolina church. The gunman was an avowed racist who brandished Confederate battle flags in photos. The mass shooting recharged debate over whether Confederate emblems represent racism or an honourable heritage.

Landrieu said Friday afternoon that the monuments represent a "sanitized" view of the Confederacy. He added that they were erected years after the Civil War ended by people who wanted to show that white supremacy still held sway in the city.

The Robert E. Lee statue was a familiar landmark for tourists and commuters who travel busy St. Charles Avenue by car or on one of the city's historic streetcars.

Erected in 1884, Lee's is the last of four monuments to Confederate-era figures to be removed in accordance with a 2015 City Council vote.

Those three statues were taken down in the pre-dawn hours without advance public notice,a precautionary measure after officials said threats had been made against contractors and workers involved in the effort.

Of the four monuments, Lee's was easily the most prominent, with the bronze statue alone being close to 20 feet tall. It's an image of Lee standing tall in uniform, with his arms crossed defiantly, looking toward the northern horizon from atop a roughly 60-foot-tall column.

It towered over a traffic circle — Lee Circle — in an area between the office buildings of the city's business district and stately 19th century mansions in the nearby Garden District.

Landrieu drew blistering criticism from monument supporters and even some political allies. But he insisted throughout that the statues honouring the Confederate figures must go. 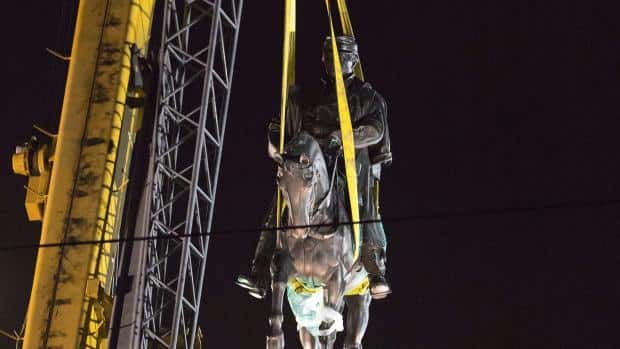 4 years ago
0:40
Workers take down statue at night; boos and cheers heard from crowds 0:40

"We will no longer allow the Confederacy to literally be put on a pedestal in the heart of our city," Landrieu vowed last month after the first statue came down.

In the news release Thursday, the city said it has received offers from public and private institutions to take individual monuments, so it will solicit proposals on where they will go through an "open and transparent selection."

Only nonprofits and governmental entities will be allowed to take part in the process, and the city said the process will include the Battle of Liberty Place monument as well as the statues of Davis and Lee. The final resting place of Beauregard's statue will be considered separately because of legal issues.

Anyone who submits a proposal to take one of the statues will have to describe how they will "place the statues in context both in terms of why they were first erected and why the city chose to remove them in 2015," the city said. They also cannot be displayed outdoors on public property within the city.

The city plans to leave the column where Lee's statue stood intact and will mount public art in its place.

The city wants to finish the work during its tricentennial year in 2018.