Alt-right leader Richard Spencer says Trump is not "the answer" but is the "first step" toward identity politics. 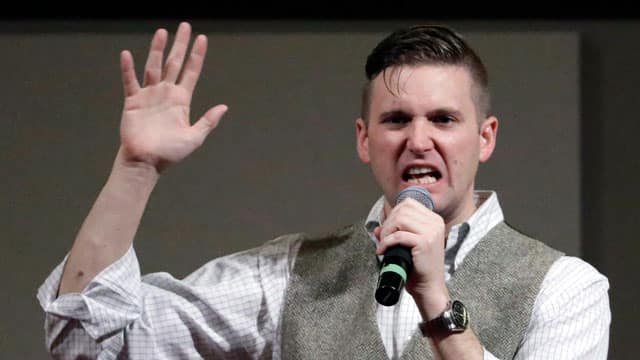 4 years agoVideo
10:31
The leader in the white nationalist movement is among those looking forward to Donald Trump’s Inauguration on Friday. Richard Spencer believes his cause is about to go mainstream in America 10:31

Count Richard Spencer among the millions of Americans who will be thrilled to watch Donald Trump take the oath of office Friday.

Spencer is no ordinary Trump supporter. He is a leader of the alt-right, a movement that rejects mainstream conservatism and promotes white nationalism — and, say many, is now emboldened by Trump's win. The movement's ideas are widely seen as racist, homophobic and misogynistic.

In Trump, Spencer told CBC News, he likes what he sees.

Donald Trump's movement, whether [Trump strategist]  Kellyanne  Conway wants to admit it or not, was fundamentally about identity for white people.- Richard Spencer, alt-right leader

"Alt-right is all about identity," he said. "And Donald Trump's movement, whether [Trump strategist] Kellyanne Conway wants to admit it or not, was fundamentally about identity for white people."

In the days after Trump's win, Spencer made headlines for finishing a speech in Washington by raising his hand for a toast and exclaiming "Hail Trump! Hail our people! Hail victory" as those in the crowd responded with Nazi-style salutes.

"Yes, I was being provocative, of course," he now says, while noting, for Canadian readers, he began advocating the alt-right while living, briefly, in Toronto. "The alternativeright.com website was born in an apartment on Yonge Street in Toronto, Canada," he said. "Fun fact."

But now the alt-right has eyes on America, and that toast came as racially tinged graffiti including swastikas began sprouting in the U.S. in the days after Trump's win.

To explain the alt-right's embrace of Trump, critics point to all the talk of banning Muslims and walling off Mexicans in the campaign, and to Trump's choice as senior adviser Steve Bannon, who used to run the Breitbart News website, whose content is often labelled xenophobic and anti-Semitic.

Just last week, at the confirmation hearing for Trump's choice for attorney general, Jeff Sessions, demonstrators opposing Sessions for his divisive track record on civil rights donned Ku Klux Klan hoods before being led out of the room by security.

Spencer critic and former neo-Nazi Christian Picciolini says the alt-right poses a threat to the U.S.

Picciolini was a key part of the American skinhead movement in the 1980s before he rejected its racist ideology. He now runs an advocacy group called Life After Hate.

"What Richard Spencer is doing today is what we did 28 years ago as very open neo-Nazis," Picciolini told CBC News. "The rhetoric is the same, the ideology is the same, the words are a little more massaged, more palatable."

Picciolini says Trump had the perfect opportunity to disavow those of his followers who promote intolerance in his name when he was pressed about it on 60 Minutes in November. But Trump only issued a mild rebuke.

"When we have a president … that just turned to camera and said 'Don't do that' instead of replying with a very thought-out, positive response to really try to quell something that's really happening in our country, that could be disastrous," said Picciolini. "We have an issue."

Spencer, meanwhile, is keen to use his newfound attention to spread his message further.

In January, he gave a talk at Texas A&M University, as an angry crowd of demonstrators protested outside.

Students in the room hissed, as security guards stood by, but Spencer was unfazed.

And he's looking forward to the next four years.

"Is Trump the answer? No," Spencer said before the talk. "Is Trump the first step, hopefully, toward identity politics? Yes. That's what got me so excited about him."