Donald Trump fended off criticism regarding his proposed Muslim ban that was not particularly harsh in Tuesday's Republican debate, while Ted Cruz and Marco Rubio seemed to confirm they see the race coming down to one of them, writes Keith Boag.

Ted Cruz, Marco Rubio seem to see the race coming down to one of them, writes Keith Boag

Good news, Republicans! Donald Trump won't try to kill your party's chances for the White House in 2016 after all.

Remember how, last week, he was putting out the word he might run against the Party as an independent if he didn't win your nomination?

Well he's not only nixed that idea, he's totally back in the tank with you.

In fact, he seemed almost sentimental when asked about it in last night's candidates' debate in Las Vegas, begging the moderator's indulgence while he expanded on his respect and affection for the party leadership.

"I am totally committed to the Republican Party," he insisted.

It was as though he'd closed one of his famous deals: Trump back in the fold, and the other candidates generally ignoring him and the things he'd said last week about banning Muslims from entering the country.

The only really sharp attacks on him last night came mostly from the largely irrelevant "kiddies' table." That's the smart aleck name for the early debate among second-tier candidates ahead of the main event, also known as "Happy Hour" and "The Undercard."

At the kiddies' table, Senator Lindsey Graham excoriated Trump for the things he'd said about banning Muslims. That's "the one single thing you cannot do, declare war on Islam itself.

"ISIL would be dancing in the streets," Graham added, except "they just don't believe in dancing."

But Trump wasn't there to hear any of it.

He was at the main debate, two hours later, talking about "tens of thousands of people having cellphones with ISIS flags on them."

"They're leaving, they're going, they're gone," he said, which didn't sound like the ban on all Muslims he'd talked about last week.

Former Florida Governor Jeb Bush, also at the main debate, challenged Trump by tagging him as "the chaos candidate," having already called him "unhinged."

"Jeb doesn't really believe that I'm unhinged. He said that very simply because he has failed in this campaign. It's been a total disaster. Nobody cares." 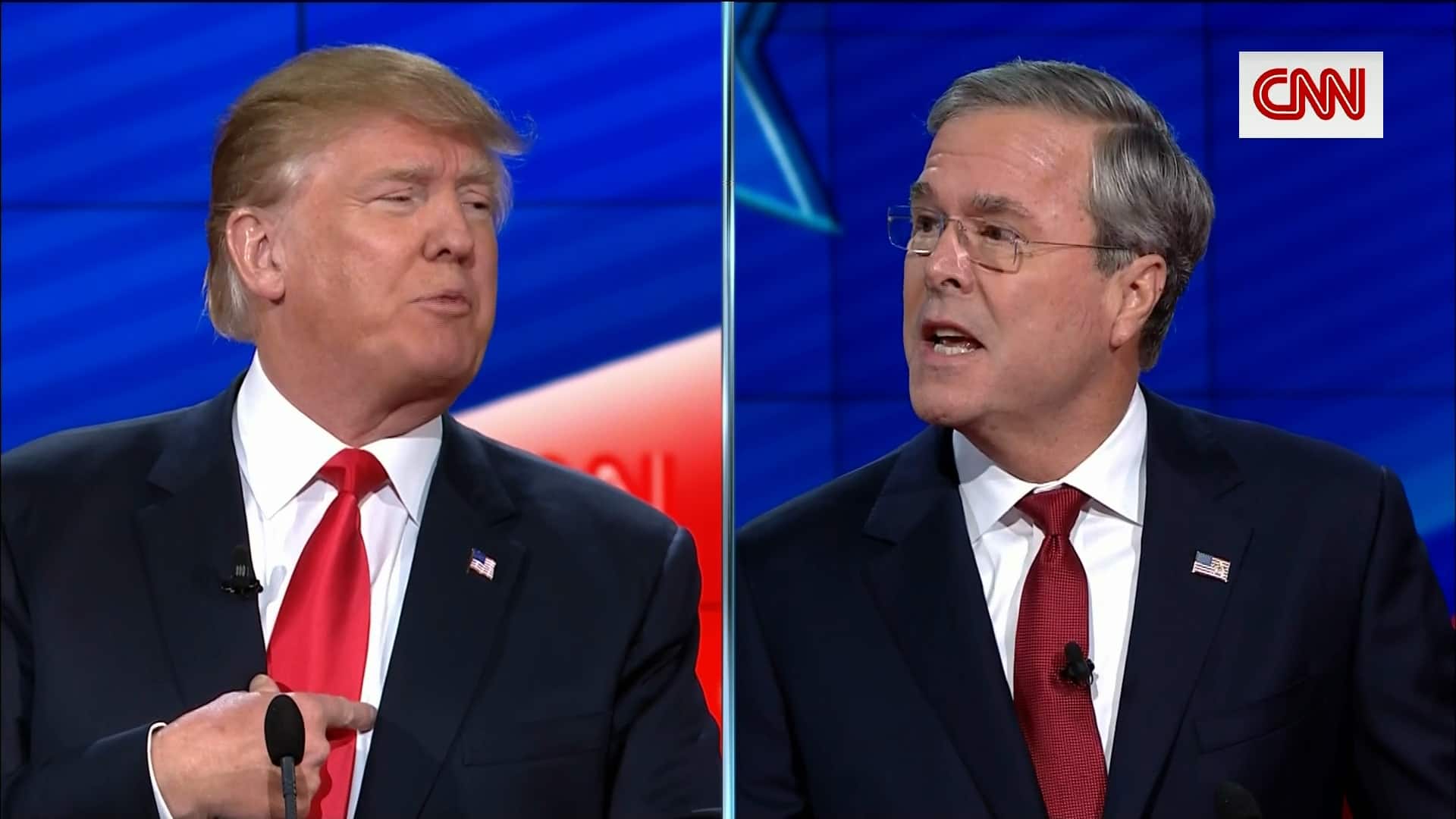 5 years agoVideo
1:26
An exchange between Donald Trump and Jeb Bush on tackling ISIS 1:26

"This is a tough business," he told Trump, "You're never going to be President of the United States by insulting your way to the Presidency."

Trump flicked him aside with trash-talk.

That was as rough as it got for Trump all night. For one stretch he went for almost a full half hour without saying a word.

The most revealing action was between the Cuban-Americans, Marco Rubio and Ted Cruz.

They picked on each other and thus confirmed that they see the race eventually boiling down to the two of them. Both have separated themselves from the rest of the pack lately, and apparently neither sees Trump as his main threat when the voting begins in the New Year.

They quarrelled over everything: security surveillance, defence spending, immigration, and more.

But it was Rubio who really had his hands full. He was the evening's piñata, and not just for Cruz.

He took more hits than Trump did, which suggests that the field sees Rubio, not Trump, as the man to beat.

And why not? Rubio has done well in some polls, and particularly well according to the data that digs deeper than just voter support.

For instance, in some polls Rubio leads the field as the second choice among voters, evidence that he has the greatest growth potential.

And whereas Trump tops polls in the unenviable "candidate I would absolutely never vote for" category, Rubio scores close to zero on that question.

Cruz, on the other hand, is thought to have a sizable chunk of Republican voters who identify as evangelicals behind him, and he hopes to feed on Trump's anti-establishment vote as well.

In fact, Cruz and Trump seem interested in poaching each other's supporters one day, so for now they're cordial. And that meant smoothing out some things last night. 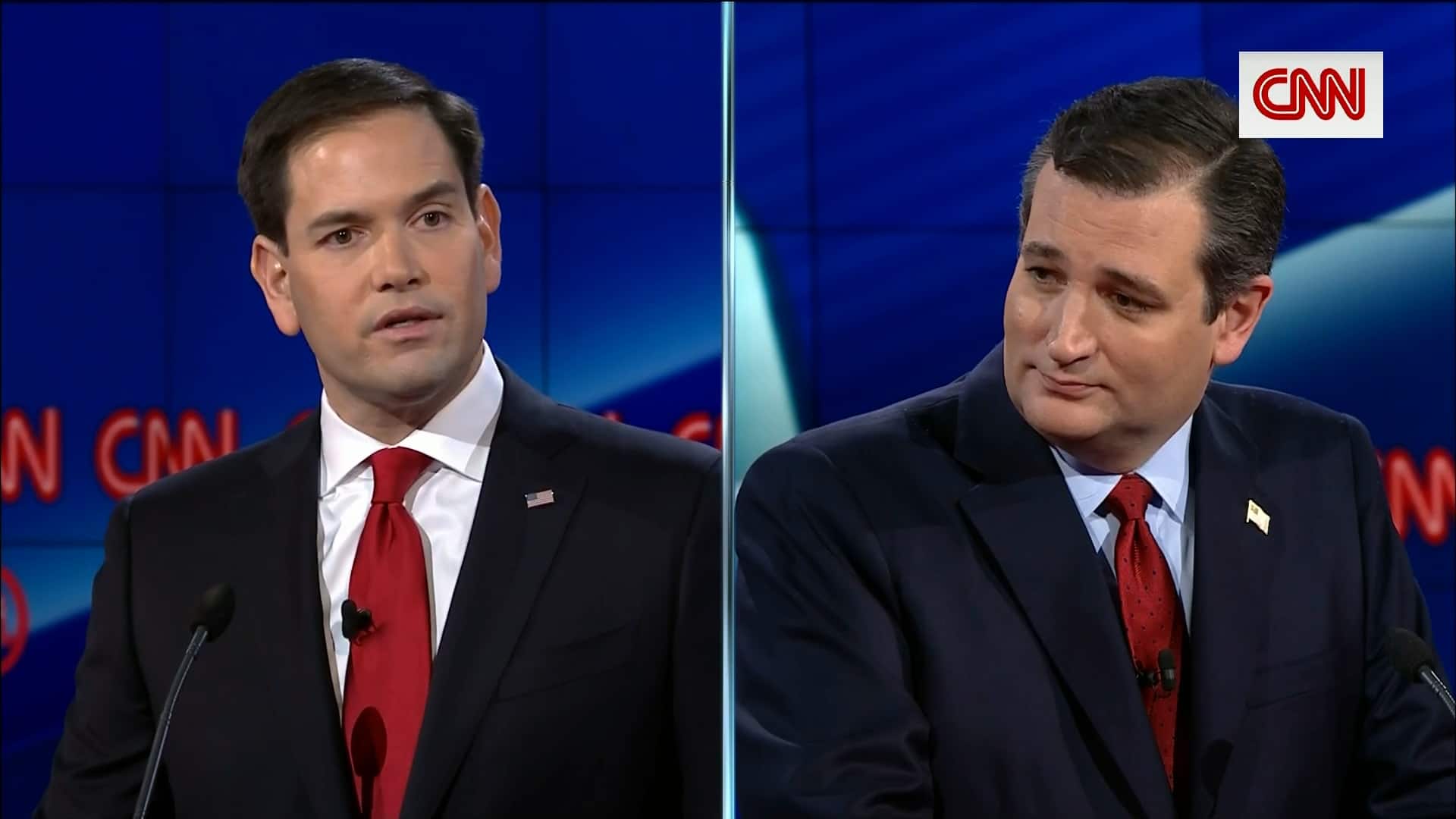 5 years agoVideo
1:14
An exchange between Ted Cruz and Marco Rubio on immigration 1:14Cruz had apparently suggested privately to some Republican donors last week that he wouldn't be "comfortable" if Trump were Commander in chief and had his "finger on the (nuclear) button."

A couple of days later Trump took it up a notch and said Cruz was, "a little bit of a maniac."

Asked about all that Tuesday night, Trump reversed course.

"I've gotten to know him over the last three or four days," he said of Cruz. "He has a wonderful temperament. He's just fine, don't worry about him."

Then there was some chummy backslapping.

Actually, reports are piling up that even Cruz's friends don't really like him. The New York Times recently ran a front-page piece on Cruz's charisma problem that included a former college roommate saying he'd rather pick a name from the phone book than vote for him to become President.

In any event, what appeared to be shaping up last night is a race where Rubio hopes to emerge as the anti-Trump candidate against Cruz who comes out as the anti-establishment candidate or "Trump lite."

Trump obviously still has other ideas. After a rocky week or two, it's probably not for nothing that he offered the party an olive branch last night.