Serbia's prime minister has condemned the "brutal treatment" of migrants and refugees by Hungarian police and warned the neighbouring country not to fire tear gas onto its territory again.

Serbia's prime minister has condemned the "brutal treatment" of refugees and migrants by Hungarian police and warned the neighbouring country not to fire tear gas onto its territory again.

Aleksandar Vucic, speaking from the U.S. while on an official visit, said he would raise the issue in a meeting Wednesday with U.S. Secretary of State John Kerry.

Vucic also said there must be an EU response to clashes between refugees and Hungarian police, who used tear gas, pepper spray and water cannons against hundreds of people at the Hungary-Serbia border.

Serbia sent ambulances to the border Wednesday after Hungarian police unleashed tear gas, water cannons and pepper spray at asylum-seekers trying to break through the wire fence erected at the border.

Some migrant and refugee women pushed to the front of the crowd and held small babies and children above their heads as they faced police in an obvious appeal for mercy. 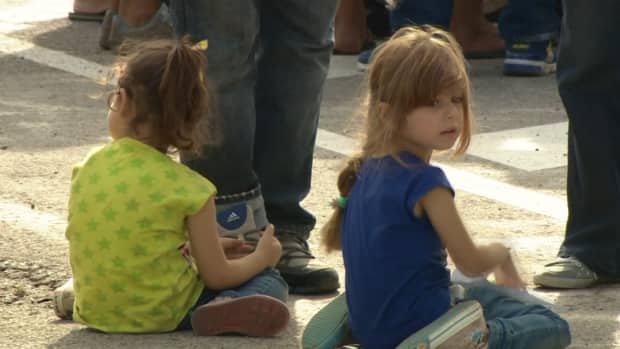 VIDEO: Nahlah Ayed reports from the Serbian border with Hungary

Many people were in tears trying to wash away the gas from their eyes, as the Hungarian forces blocked them from entering Wednesday near the Serbian town of Horgos.

Several people received medical treatment from the Serbian ambulance service. Most were suffering from the tear gas, but one young man had a bloody leg.

"We fled wars and violence and did not expect such brutality and inhumane treatment in Europe," said Amir Hassan of Iraq, soaking wet from the water cannon and trying to wash tear gas from his eyes.

"Shame on you Hungarians!" he shouted, pointing toward the Hungarian police who were firing volleys of tear gas canisters directly into the crowd.

UN Secretary General Ban Ki-moon said he was "shocked" to see how refugees and migrants have been treated, and called it unacceptable.

He said that he had spoken by phone with Hungarian Prime Minister Viktor Orban.

Ban also singled out Syria, saying that "people facing barrel bombs and brutality in their country will continue to seek life in another."

Blocked by Hungary, the exodus of of people streaming from Syria, Iraq and Africa has started entering neighbouring Croatia. But that brings them into a whole new danger zone — former mine fields along the country's front line in its 1991-95 war.

Croatia's Mine Action Center says there are still 500 square kilometres of suspicious areas throughout the country, but all have been clearly marked. Croatia was sending demining experts to the border area where migrants began crossing on foot.

Centre official Miljenko Vahtaric told the Associated Press there are five suspicious spots in the border area with Serbia, which migrants have started using as a new route to the European Union. He says demining teams have been working in the area for months.

Serbian media reported that at least 10 migrant buses had left for Sid from the southern Serbian town of Presevo, where several thousand enter every day from Macedonia, streaming north across the Balkan peninsula.

Croatian police said that by Wednesday afternoon more than 300 migrants entered the country and were en route to asylum centres in central Croatia.

Many may now hope to enter EU member Croatia and then Slovenia, which is part of Europe's Schengen zone of border-free travel, and beyond to Austria and Germany.

Alert to the possibility, Croatian Interior Minister Ranko Ostojic said on Tuesday that Zagreb had prepared an "emergency plan in the case of an influx of thousands of refugees", but did not give details.

Hungary's former prime minister criticized his country's treatment of the refugees stranded at its borders with Serbia.

Ference Gyurcsany said Hungary's leaders needs to sit down with their Austrian and German counterparts to map out a "safe corridor" for migrants escaping war-torn regions in the Middle East and Africa.

"Thousands and thousands of people arrive every day," Gyurcsany told CBC News. "Sooner or later, we have to pull down these borders, and somehow we have to solve the problems."

Hungarian authorities said they have arrested a total of 519 refugees and migrants who tried to cross the border illegally since tough new laws went into effect on Tuesday that make it a crime to cross the border from Serbia. The number of refugees and migrants rounded up by police in Hungary plunged to 366 on Tuesday from a record 9,380 on Monday, after Prime Minister Viktor Orban's government shut the main land route.

One of the first hearings saw an Iraqi man sentenced to a one-year expulsion from Hungary after he was found guilty of illegally crossing into the country at the Serbian border.

"This is a message to others, to potential culprits, that they should not commit this crime," judge Krisztian Kemenes told the court. The man, identified in court as Swadi Talib, had crossed the fence on Tuesday, the first day of the crackdown.