Thousands more refugees to arrive in Hungary in next 10 days: UN

Leaders of the United Nations refugee agency warned Tuesday that Hungary faces a bigger wave of 42,000 asylum seekers in the next 10 days, and will need international help to provide shelter on its border.

Refugees on the move

5 years agoVideo
2:38
Thousands of people have been allowed to move on to Athens from Greek island Lesbos 2:38

Leaders of the United Nations refugee agency warned Tuesday that Hungary faces a bigger wave of 42,000 asylum seekers in the next 10 days and will need international help to provide shelter on its border, where newcomers already are complaining bitterly about being left to sleep in frigid fields.

​Officials from the UN High Commissioner for Refugees said it was sending tents, beds and thermal blankets to Hungary's border with Serbia, where for the past two days frustrated groups from the Middle East, Asia and Africa have ignored police instructions to stay put and instead have marched on a highway north to Budapest.

Commissioner Antonio Guterres accused the entire European Union of failing to see the crisis coming or take co-ordinated action, even though the 28-nation bloc of 508 million people should have enough room and resources to absorb hundreds of thousands of newcomers with ease.

There was needless suffering in the migration crisis "because Europe is not organized to deal with it, because the European asylum system has been extremely dysfunctional and in recent weeks completely chaotic," Guterres said. He told a news conference in Paris that it appeared "clear that if Europe would be properly organized, it would be a manageable crisis."

The EU has struggled, in part, because front-line nations such as Hungary and Greece have not put enough facilities in place to house a human flow averaging 2,000 to 3,000 a day while the vast majority of people try to push deeper into Europe and seek refugee protection in Germany, the nation accepting the greatest number by far.

Germany already expects to take in 800,000 this year, and Vice Chancellor Sigmar Gabriel said Tuesday it could take a further one million over the next two years. Many other EU members have yet to follow Germany's lead, and Hungary's government instead is focusing on building a border fence to block the route from Serbia. It plans a series of get-tough frontier security measures that it hopes to start enforcing Sept. 15, although international observers are skeptical.

The UNHCR's refugee co-ordinator for Europe, Vincent Cochetel, told a Budapest news conference that Hungary could not cope on its own with the coming, even bigger volume of asylum seekers. He said 42,000 people — 30,000 in Greece, 7,000 in Macedonia and 5,000 in Serbia — were likely to enter Hungary in the next 10 days, requiring greater international help.

"We need better co-ordination to make sure we don't have chaos at the border," he said, chiding Hungary for allowing people to be left overnight "in a very dire situation."

Hungary's inconsistent reception near the border village of Roszke has left many hundreds waiting for buses that arrive too infrequently, leaving large numbers stranded at night. Officers have found it increasingly difficult to keep them within a designated field. Some have pushed through police lines and walk north deeper into Hungary, while others head south back to Serbia where camps are sometimes better organized.

On Monday, a few hundred people broke through police lines near Roszke and, despite being hit with pepper spray, made it on to the main highway linking Serbia with Budapest. It happened again Tuesday night following a day of scuffles with officers in which one man was injured amid a stampede.

The government has given little aid, leaving volunteer groups to provide food and water instead. The field near Roszke has become strewn with garbage. Volunteers stepping up to assist refugees in Europe

At Budapest's main international train station, more than 300 people — mostly asylum seekers — lined up for tickets. Last week, Keleti station became an open-air camp when Hungary briefly stopped refugees from taking trains to Austria and Germany. Authorities are once again letting these travellers take trains deeper into the EU, although they often ride in separate cars from other passengers.

Nada Mahmod, a 30-year-old from Syria, delayed her departure from Keleti because she could not find her 14-year-old son, Mohammad Diar, for days. Her agony ended with a reunion Tuesday, and they boarded a train together.

"We lost him in the forest. He went with another group," she told The Associated Press, showing his photo in desperation hours before he was located. "Police in Hungary don't help. Everybody else helps. Not the police."

About 7,000 people arrived in Vienna between early Monday and early Tuesday, and "almost all of them continued on to Germany," according to police spokesman Patrick Maierhofer.  Crowds continued to arrive at  Vienna's Westbahnhof train station on Tuesday night. 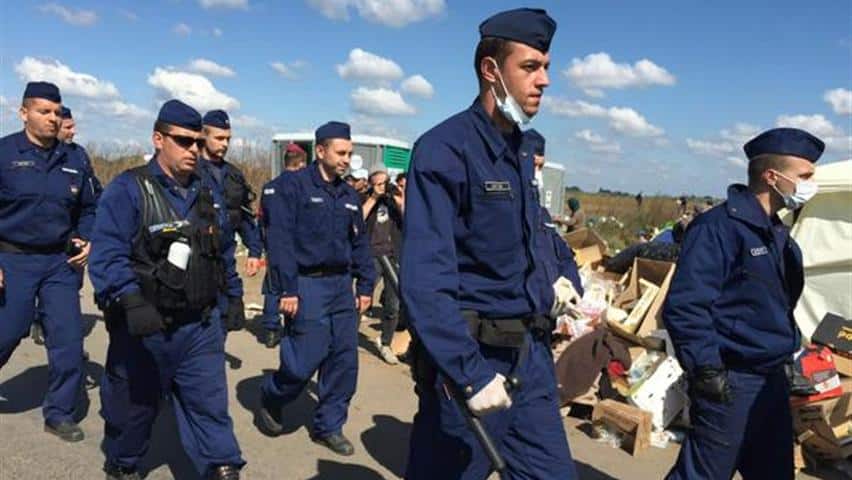 Tensions mount on the Hungary-Serbian border

5 years agoVideo
0:59
The CBC's Nahlah Ayed is on the border, where migrants wait to board buses to a transit camp, watched over closely by police officers 0:59

In Geneva, the UN special representative on international migration said too many countries wanted to give financial aid but no places for refugees to live.

"Buying your way out of this is not satisfactory," said Peter Sutherland. Even so, UN members had not provided nearly enough funding for existing relief efforts, he added.

Poland, the largest of the EU's eastern members, has agreed to accept 2,000 refugees, saying it has too many economic problems to take more. In addition, officials have said that as a predominantly Roman Catholic country, Poland would have trouble integrating Muslims. Prime Minister Ewa Kopacz said it would accept only those who have no hostility toward Poland.

In Greece, the coast guard said its patrol vessels picked up nearly 500 people in small boats in the eastern Aegean Sea near the islands of Lesbos, Samos and Kos and the islet of Agathonissi.

More than 15,000 are on Lesbos awaiting screening before they can board a ferry to the Greek mainland. Although Greece is an EU member, migrants have for years freely left its dysfunctional asylum system and headed north through Macedonia and Serbia into Hungary and, from there, to Western Europe.