So constant are the heart-stopping arrivals of distressed refugees in waterlogged boats landing on the shores of the Greek island of Lesbos that a terrible sameness has descended on the daily effort to help them to safety and beyond.

More than 110, 000 refugees have landed on the Greek island of Lesbos since the beginning of October

A young man just plucked from the sea between Turkey and the island of Lesbos sits wet and shivering on the deck of the coast guard ship that has just brought him and a dozen or so other survivors to the port of Mytilene. Their boat had just capsized.

He was draped in the crackling gold of an emergency blanket, huddled amongst the others, and wanted to stand up. But the sailors told them all to stay seated until a gangplank was put in place.

"We think so," he said. And then he added: "Thank you very much for asking."

The polite afterthought in the moments following what must have been a terrifying ordeal stayed with me. It was a kind of ordinary courtesy delivered in the midst of the most un-ordinary situation imaginable, and was as if to say "please forgive me if my desperate journey inconveniences in any way, that's not my intention."

The new, distressing, normal on Lesbos

But here on this island of some 80,000 people in the Aegean Sea off the coast of Turkey, the extraordinary, the distressing and the nearly unbelievable are happening so constantly that they are in danger of becoming ordinary.

VIDEO: More arrive on the northern coast of Lesbos

That is, until the next boat full of asylum seekers sinks and startles everyone out of their torpor. And even then the rescue efforts have begun to take on a terrible sameness when it comes to the drownings, of children more often than not.

"It's hard because I'm human," a Palestinian doctor volunteering with an Israeli aid organization tells me as we stand next to the shore and as yet another boat disgorges its tattered passengers earlier this week.

We lost a baby and until now the sea didn't give it us back.- Issa Daoud, volunteer doctor

"In the last three days we have winter, with winds, he says.

"It was crazy. We lost a baby and until now the sea didn't give it us back."

Here in Lesbos, the daily arrivals of waterlogged boats tossing up their human cargo have reached a near industrial scale.

One morning last week we watched dozens of boats docking here in a matter of hours. By nightfall, an estimated 10,000 people had crossed from Turkey to this Greek enclave.

The view from the hills down on to the shoreline looks like nothing so much as a major travel terminus. It is a hive of activity. People tumble out of boats, helped to shore by a steady supply of volunteers, including a band of dashing lifeguards from Spain.

Dressed in wet suits in the orange and yellow of the Spanish flag, they plunge into the sea to steady boats and wade to shore with babies held high over their heads, the infants' tiny arms spread out wide to the skies, as if in supplication, by the too-big life jackets they're packed into by their parents.

Some parents have tied ropes around their waists and those of their children so they don't become separated in the event of a capsize.

Once ashore people pray, collapse, cheer, hug. They're offered blankets and bananas and a doctor's care if needed.

They take off their wet clothes and untie the plastic bags they've secured around their shoes. Or they look for new shoes from volunteers handing them out because they've lost their own or they're too wet. 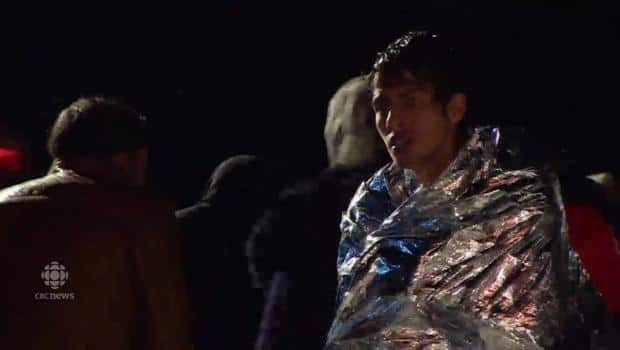 Refugees continue to land on Greek island of Lesbos

5 years ago
0:39
Raw video shows survivors getting off rescue boat 0:39

And then they pick up their meagre belongings and their children, draping them over their shoulders or on their backs, and head through the fishing village down the road in a steady stream.

'I've never seen anything like this in my lifetime'

These are tiny villages.

In Sykamania, cats sleep in the sun and an old man feeds a goose next to the bobbing fishing boats while across the way the refugees stagger past, asking directions for the UN camp up the road where they can find a bus to take them to the main port.

We met an 82-year-old woman named Aphrodite in the village as she sat on a stone wall watching these new arrivals go by.

"I don't know what to say," she says. "I have never seen anything like this in my lifetime. Every day. Every day."

I have never seen anything like this in my lifetime.- Aphrodite, 82-year-old villager

Aphrodite is herself the child of refugees, like many of the locals on Lesbos.

Her mother was one of the ethnic Greeks living in Turkey who fled the Turkish army in the 1920s.

Many of the children of that generation can equate what they're seeing with what their parents went through. It seems to give them more sympathy, even if they are a loss as to how to help.

"When are these people going to be saved?" asks Aphrodite. "We don't know. And even if they stay here there are no jobs."

Get off the island

None of these arrivals want to stay, of course. Their dreams are housed elsewhere.

To get off the island they have to register with Greek authorities. In September, tens of thousands of people were simply sleeping outside in the streets while they waited weeks to be registered.

Aid agencies helped the Greek government clear the backlog, but it's building again.

Families are again camping outside in squalid conditions and much colder weather, although this time mainly confined to camps the European Union is trying to establish.

European governments have pledged to help Greece set up some 50,000 refugee places at "reception centres" by January, in the expectation that migrants will be processed and screened for the EU's much-vaunted, and so far unexecuted, quota-sharing system for refugees within the 28-nation bloc.

The Moria camp, identified as Greece's first "hot spot", is a fetid, garbage-strewn place where not a soul I met there had any intention of remaining in Greece once they got their papers.

Alessandra Morelli, the seemingly tireless country director for the UN High Commisson on Refugees in Greece, admits there is a big problem ahead.

Mind you, just watching the heart-stopping drama being played out on the beaches of this small island every day, it seems clear that whatever EU leaders are deciding in far-off Brussels is pretty irrelevant to what is actually happening on the island itself.

When I visited Lesbos in early September, my overwhelming sensation was that there were two universes operating — islander and refugee, insider and outsider — which were managing to co-exist without really ever touching.

This time, there seemed to be more of a meshing between the two worlds, born of necessity, no doubt.

The local businesses have come to understand that the large numbers of people coming to Mytilene can be good for business during what would normally be the off-season. The same goes for the ferry operators and the taxi drivers.

It seems that the constant presence of these asylum seekers has begun to alter a little the sense that these islanders have of their own reality. And that suggests that they know it will be their reality for some time to come.